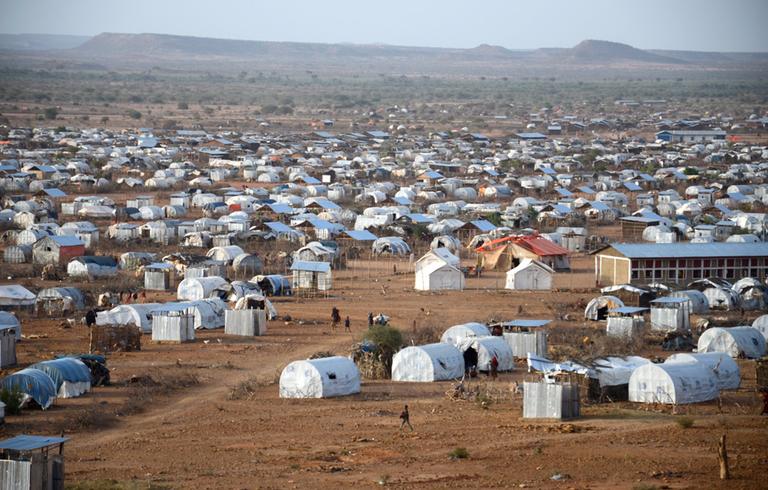 Energy poverty is a persistent problem in refugees’ lives. Isolated from the national grid and lacking reliable access to renewable power, the search for alternative energy is a struggle refugees often grapple with. But, Moving Energy Initiative (MEI)’s pioneering approaches involving private sector players, and market-oriented activities seek to alleviate this challenge, while improving refugees and host communities’ lives.

In Kakuma refugee camp, northwestern Kenya, many refugees do not have any form of lighting at night. Also, reliance on firewood for cooking exposes households to health problems. Women and girls also face various risks when they leave camps in search of firewood. For schools, healthcare centres, businesses and community facilities, access to inexpensive, sustainable energy sources is important yet lacking.

Some of the on-going initiatives of the DFID-funded partnership to address such challenges include incorporating private sector players to implement low carbon projects to reduce fossil fuel use, establishing local market-based solutions for energy access, and creating energy markets and livelihood opportunities. Energy 4 Impact is working in partnership with Chatham House, Practical Action Consulting, Norwegian Refugee Council and UNHCR, with projects are on-going in Kenya, Burkina Faso and Jordan.

Kakuma, home to 185,000 refugees from neighboring countries including South Sudan, Somalia, DR Congo, Burundi, Ethiopia, Uganda and Rwanda, is located in Turkana County. This is a marginalised region, where 2.7 per cent of the population had access to electricity as their main lighting source in 2015, according to the Kenya Off-Grid Solar Access Project (KOSAP) estimates.

Refugees are often ignored important economic actors with the potential to make significant socio-economic contributions to themselves and the host community. Few organisations working in energy access initiatives pay sufficient attention to refugees’ energy needs due to uncertainities related to relocation from the camp. Also, refugee camps are normally located in places far from major economic areas, making them rather unattractive to investors. Governments have also not been proactive enough in extending electricity coverage to refugee camps or surrounding areas. Although, the Kenyan government plans to install a power line in Kakuma to serve locals and camp residents, the process could take time.

Meanwhile, some donor-funded approaches focusing on handouts have proven ineffective and unsustainable, and have undermined attempts to introduce viable markets in refugee settings. While delivered with the best intentions for enhancing the lives of refugees, the impact of such handouts is rarely as intended. MEI attempts to change this by working with markets and reducing dependency on handouts.

“We are challenging that (handout) approach by ensuring our low carbon and market development projects have long term sustainability financially and in terms of local ownership,” says Joe Attwood, MEI Programme Manager.

The approach further seeks to lessen hostility between refugees and the host community due to stiff competition for scarce fuel sources.

Bringing theory into practice MEI has commissioned a series of projects to test the model of private sector engagement. The partnership with BBOXX, a private company, has for instance, occasioned plans to establish a distribution outlet for sale of solar home systems (SHS) in and outside the camp. BBOXX and Energy 4 Impact have lined-up consumer awareness activities to educate refugees and host communities on the benefits of solar products. Also, by supporting them to establish enterprises such as solar kiosks or service centres, refugees and the hosts will be actively involved in clean energy value chains as distributors or technicians of energy products such as SHS, solar lanterns and improved cookstoves.

Other private sector players involved in the initiatives include Crown Agents, which has constructed a solar-powered ICT and learning hub; and Kube Energy, which is solarising two healthcare clinics managed by the International Rescue Committee (IRC) at the camp.

The solar-powered ICT and learning hub is complete and is equipped with low-energy consuming computers, internet, printers, photocopiers and stationery. It will provide access to energy for computer use, internet, phone and solar home kit charging, vocational training, life skills and community cohesion through joint trainings of refugees and the host community. At least half of the solar ICT hub’s users will be women.

“The hub will also allow children to learn and develop confidence in ICT skills from an early age. It will also accord refugees and the host population an opportunity to acquire skills in trades such as leather craft, computer repairs, horticulture, weaving, plumbing, carpentry, mechanics and baking,” says Sarah Hare, Senior Practice Specialist at Crown Agents.

Local entrepreneurs will have an opportunity to establish small shops and other businesses related to entertainment, internet access, phone charging, printing, and photocopying at the hub. Households will also have reliable access to clean energy through the sale of solar lighting and charging kits.

Kube Energy will train IRC staff, as well as 15 skilled and non-skilled people from the host and refugee communities to support the installation, operation and maintenance of the solar system at IRC’s two primary healthcare facilities. Once complete, the project is expected to cut IRC’s diesel fuel consumption and operational costs by 80%. Cost savings, estimated at US $63,000 annually, will be redirected to expanding existing healthcare programmes, including purchase of x-ray equipment for the radiology department at the general hospital, installation of a refrigerator to keep the cold chain for vaccines at one of the facilities, says Mads Hansen, Kube Energy CEO.

IRC also plans to hire four additional mental health nurses to offer psychological support to vulnerable groups such as survivors of gender based violence. Also, besides funding nine additional annual immunisation campaigns to fight communicable diseases such as measles and polio, the savings will fund the acquisition and installation of an electronic medical records system. This will allow smooth access to the records of patients visiting all IRC healthcare facilities within the camp. IRC’s carbon dioxide emissions will also decline by 140 tonnes annually as arising from a shift to solar power use. Local enterprises around the healthcare facilities will also be connected to solar energy.

Kericho Gold to Exhibit in Japan