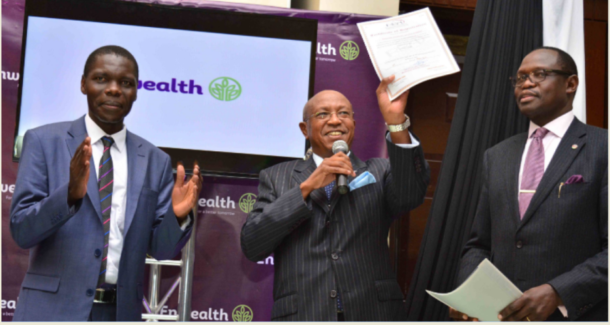 Enwealth aims to be part of the revolution

The Kenyan pension industry has been on a steady rise, thanks to reforms brought by the Retirement Benefits Act in 2001. The industry’s assets have grown tremendously from KSh50 billion in 2000 to KSh814 billion in 2015 and the figure is expected to hit the KSh1 trillion-mark by the end of 2016.

But despite this development, only 15 per cent of the labor force in the country has a retirement plan. This creates a potential crisis.Kenya is among countries with high levels of old age dependency in the world meaning caring for the aged population in the future is going to be a challenge. Low levels of retirement savings have been known to exert pressure on the economy. Besides providing for the older generation and their dependents, pension funds are also effective tools of mobilizing long-term savings, which are in turn used to grow GDP.

Simon Wafubwa, the founder and CEO of Enwealth Financial Services, says there is a gap in the delivery of retirement benefits and there is an opportunity for private schemes to extend their services. Enwealth was born out of a high demand for training, consultancy and retirement benefits services in the country. And for the last five years, it has been among a few companies contributing towards the deepening of pension services in Kenya.

“Research indicates that most people at retirement are leaving longer as a result of improved healthcare and general quality of life. This brings the need for effective and sustainable social security benefits designs,” says Wafubwa.

Enwealth has over the years developed products aimed at enabling the population to save for retirement.In 2014, the company was recognized by the industry as the second best pension administrator. Formerly known as Liberty Pensions Services, the firm re-branded in May 2016, shedding the former identity and replacing it with the Enwealth brand a move the company termed as strategic.

“Over the last few years, the company has grown to become a key player in the industry. We ventured into new pension-related businesses and as result, the board decided that a rebirth will address the company’s new mandate.”

The firm’s new decree, according to Wafubwa, is to enhance Kenya’s pension coverage from 15 per cent to 30 per cent. He says the only way to achieve this is to remain innovative, especially at a time where the use of ICT cannot be ignored.

“Inspired by the vision of a dignified retirement life for all, we crafted social security solutions for our clients financial freedom. With that, we have not only created employment but also immensely contributed to the innovation agenda of the social security agenda.”

One of the new products the company has introduced recently is KeshoHela which since establishment has grown popular.  KeshoHela is a trust and a separate legal entity from Enwealth Pensions Services Limited whose minimum drawdown is set at 10 years.The scheme assets are held by an appointed custodian and separated from the assets of the founding company which then enhances the security of the clients funds. Members may draw an Income up to a maximum of 120 per cent of the life annuity that can be purchased. As one draws down a monthly pension from the fund, the residual balance is then invested and the investment income  ploughed back into the fund, hence providing for growth of the funds.  The income draw down provides one with an option of reviewing their monthly pension after every three years. Upon reaching the age of 75 one can move from the income draw down arrangement into an annuity if they desire.

Today, Enwealth accounts for approximately 5 per cent of the market share in the pension administration service segment. And in the next few months the company expects the market share to grow even as it sets its sights on the SME market. “Saving for retirement does not rank highly as a monthly financial obligation for many SMEs and their staff. Rather, financial worries normally revolve around accessing the right amount of working capital to meet daily operations.”

Wafubwa says Enwealth’s Umbrella Fund whose main target is the SME sector is gathering steam. “We hope that through the development of the national social security policy, there shall be inbuilt incentives to enable the SME market, which accounts for over 60 per cent of our GDP, to save for retirement.”

As the firm plans to expand into the broader African and diaspora market, Wafubwa says ICT is going to play a crucial role. The products, he says, cut across different sectors of the economy but adds that there is need for Enwealth to widen the market for pension schemes.

Wafubwa, who has over 15 years experience in the industry, says Enwealth will maintain its ethical business practice even as it aims to grow its clientele, which includes over 100 corporate clients as well as grow its fund value which is currently valued at KSh40 billion. Half of this amount is invested in government securities while 30 per cent is in capital markets. “We are looking to make some prudent investment moves such as diversifying our investment portfolios into emerging investment vehicles in the capital markets to optimize returns for members,” he says.