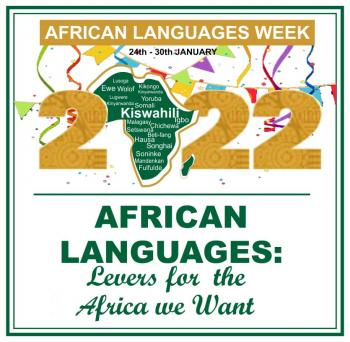 The African Union has launched the African Languages Week as a way of promoting African languages and cultures across the continent and is currently ongoing until January 30.

The African Languages Week was launched as a perpetual rendezvous and major annual event that should be observed by all member states of the African Union, to commemorate the relevance of African languages and cultures in Africa and the African diaspora, as a special moment of African identity and in celebrating African patrimony, culture, identity and heritage.

The theme of this year’s celebrations is “African Languages: Levers for Building the Africa We Want” which is being coordinated by the African Languages Week Coordinating Committee, established by the Executive Secretariat of ACALAN.

The main role of the Committee is to stimulate more dynamism for the development and promotion of African languages across the African continent and in the African Diaspora by assisting ACALAN in the annual celebration.

It will also ensure smooth running of activities of the African Languages Week by proposing the theme for each year, and mobilizing resources (human, technical and financial) for planning and organizing the activities of the week throughout the continent and in the Diaspora, in collaboration with National Language Structures in the Member States serving as ACALAN’s national focal institutions.

In a press statement, the AU Commission said that the main objective of the inaugural edition of the African Languages Week is to increase awareness and appreciation of African languages by looking at pragmatic ways of empowering and rendering them relevant to the lives of Africans; promote the dynamics of African worldviews and philosophies of life, through the empowerment and use of African languages; demonstrate the indispensable role of African languages in the integration and sustainable peace and development of Africa.

“The African Languages Week is also geared to taking stock on how African languages are faring in the world of global languages so as to see where we stand in our language development endeavors. “

“It is also a way of developing linguistic cooperation and exchange, and assessing the necessary and vital work of developing the languages and the work that still needs to be done. ” read part of the statement.

The commemoration will help to determine ways and means of making African languages more functional, acceptable and part of the development discourse of Africans and African global citizenship.

Various activities are designed around marking the African Languages Week 2022. ACALAN’s working structures in the AU member states will be expected to play a leading role in this regard.

Meetings are expected to take place on 25 and 26 February in virtual plenaries and breakout sessions owing to the Covid pandemic to chart the path forward. Participants (experts in the various domains) will make presentations on best practices, lessons learned and make suggestions on the way forward.