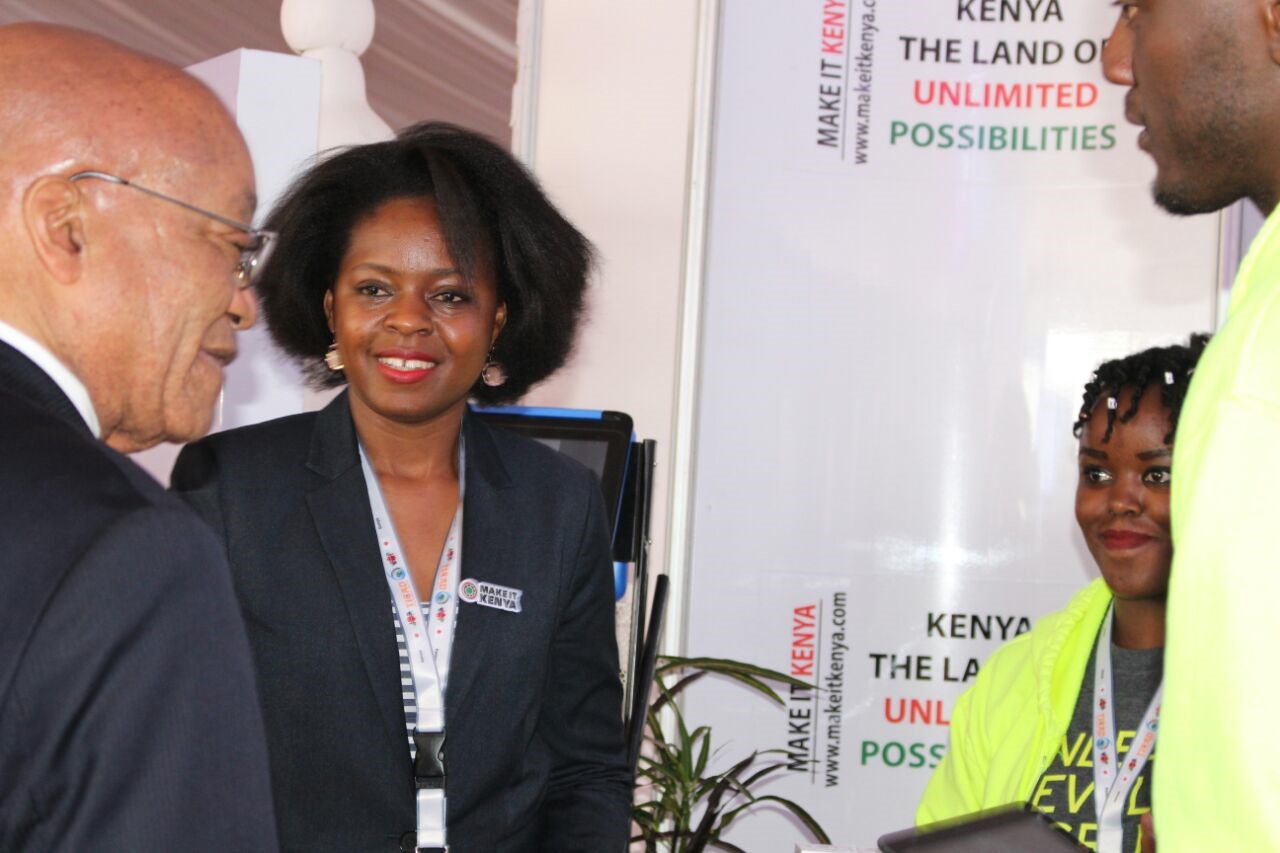 It has taken good leadership and bold steps to transform Kenya into an attractive global brand.

Corporate expatriates Alan Branche and Sam Bodley Scott were apparently talking straight to Mary Luseka, the Chief Executive Officer (CEO) of Brand Kenya Board, when they said: “Strategy execution is the responsibility that makes or breaks executives.”

And to Luseka, she made promise to execute strategy well enough to the benefit of her career, employer and clients.

That call she received at the beginning of 2016, was either going to be a punch-line to her career journey or a dream lost if she assumed it.

The caller on the other end, as it appeared, wasn’t that ordinary contact person on her phonebook, but the Principal Secretary (PS) in the Ministry of Tourism, Hon Fatuma Hirsi.

The PS had called to convey the Ministry’s decision to move her from Kenya Tourism Board (KTB) to Brand Kenya Board (BKB) to become CEO in acting capacity for a period of six months.

This was after reviewing her capability, qualifications and history of performance, and was fully convinced she was the right person to market Kenya to her citizens and the rest of the world as the most preferred Tourism, Trade and Investment destination.

“I had been undertaking a training session on the New Public Procurement Act 2015 when I received the phone call asking of my interest in the job,” says Luseka, who was gearing up for a challenging task ahead.

BKB, a state corporation established in March 2008 through the Brand Kenya Board order pursuant to the State Corporations Act (CAP. 446) aims to establish a brand for Kenya, which positions her optimally in terms of investment, creditworthiness, tourism and international relations.

The body also unites Kenyans and provides them with positive information about the country in a bid to promote patriotism and national pride, and establishes an integrated approach within government and private sector towards international marketing of Kenya.

Further, the board sets to build national support for the brand within the country with the cooperation of government, non-government organizations and the private sector, and to promote local products and services to encourage economic transformation, among other key functions.

Unfortunately, when Luseka came into the board, funding staggered at the limits of about Sh20million annually, staff was small and there were few structures to drive the country’s image to its target bases, making it difficult to undertake its mandate.

“I immediately realized that in order for the institution’s transformation agenda to commence, there was need to prioritize addressing the human capital and the budget constraints it was facing. I am glad that government has demonstrated its full commitment and support,” says Luseka.

Going forward, the CEO says, they focused on attaining visibility for the country’s brand, mainstreaming branding across Public Service sector and took on the leadership role in a bid to define and shape Kenya’s narrative.

Making Kenya visible, she explains, meant being at the forefront with key issues affecting her and the people, implementing programs and piggy-backing on prospective events that would build the country’s brand.

“With the limited finances, we thought the best way to market the country was to piggy-back on strategic events. We would draft proposals to the National Treasury on how Brand Kenya would position the country as the preferred place in Africa for Tourism Trade and Investment to all delegates coming in for the strategic events,” she says.

And it worked. When Kenya hosted Tokyo International Conference on Africa Development (TICAD VI) in August 2016, arguably one of the greatest conferences of all times to be held in the capital Nairobi, the board was supported to play her branding role so as to showcase a uniform Kenya brand.

The East African country had been selected to host the TICAD fete on behalf of African Union, bringing as many as 30 heads of state and government to take part in the deliberations, with a colorful opening ceremony officiated by Japan Prime Minister Shinzo Abe.

Kenya had now positioned herself well before the world as an attractive Tourism, Trade and Investment destination after it hosted United Nations Conference on Trade and Development (UNCTAD) on July 2016, in which the board fully participated in enshrining the opportunities the brand offers to the delegates.

The Board’s next most critical task, the CEO says, was to begin to mainstream branding within public service and thereafter beyond.  This mainstreaming was intended to ensure that all agencies that play a role in defining and shaping the Kenya brand become active players and therefore brand ambassadors.

The Board has also initiated the mantra, ‘Be, say, do’ to define the nation branding process, a move that has ensured that ‘who Kenya is and her promise to the world is well defined and effectively communicated, enabling her to live up to that promise through actual delivery.’

To this effect, the Public Service Branding Guidelines have been developed and once they are approved, they will be distributed to all Ministries, Departments and Agencies (MDA’s) and the Board will guide their implementation to ensure brand harmonization in the public sector.

“We are not a physical branding company. We are much bigger than that. We define and shape narrative on Kenya. Therefore, there’s no way we were going to succeed if we only focused on branding banners or give aways, a job more familiar to physical branding firms,” she says.

Cognisant of some of these measures put in place to build the brand, Kenya has since received numerous accolades including at the World Travel Awards 2016 gala ceremony held at Diamonds La Gemma dell’Est resort in Zanzibar in April where the Maasai Mara was voted Africa’s best national park, Diani Beach the leading beach destination and Nairobi the best for meetings and conference destinations.

Kenya’s investment climate, on the other hand, got fresh breath after it improved 21 places up World Bank 2017 ease of doing business index, making the country one of the best investment markets in the continent, among other accolades.

Impressed by the leaps the country has taken in recent years and the role stakeholders have played in the achievements, Luseka, on her part credits the immediate former employer, Kenya Tourism Board (KTB) partly for her latest success.

This followed a series of attacks by Somali Islamic insurgents Al-Shabab in key towns and cities in the country.

Even though the western countries stated that they had made the decision to protect their citizens from terrorist attacks, the Kenyan government expressed strong disappointment saying the move was aimed at causing panic among citizens.

But all these pleas fell on deaf ears. The British government issued another travel warning advising its citizens to avoid travelling to Mombasa, Eastleigh in Nairobi and areas within 60 kilometers of the Kenya-Somali border, a statement that worsened fears among foreign tourists about the state of security in the country.

Immediately, a massive walkout ensued as western countries, led by Britain, started airlifting citizens- the major foreign exchange contributors to the sector- through their airlines, Thompson and First Choice.

“I was the secretary for the task force for tourism recovery, which had stakeholders from various government ministries. We introduced a raft of measures to revamp the sector,” Luseka says of the sector that months later registered an impressive number of foreign tourists.

Further, the CEO traces the steps into her long career journey to Kenya Commercial Bank (KCB).

A graduate from the University of Nairobi with a Bachelor of Arts degree in Economics and Sociology, a Diploma in Marketing from the Marketing Society of Kenya, and holder of an MBA from the Strathmore Business School, Luseka joined KCB as a graduate management trainee and climbed the ladder up implementing strategies, new products and leading marketing campaigns.

She left the bank for Gulf African Bank, an Islamic Bank that was at the time launching in the country and saw it grow through the ranks before moving to Kenya Tourism Board.

Arguably, now one of the youngest CEOs in Kenya’s public sector after being fully confirmed to the position months ago, Luseka believes all citizens are agents of change and can drive the country to the next level.

That is why Brand Kenya Board is set to roll out one of the country’s greatest communication drive to showcase the journey brand’s to date and rally Kenyans to be at the forefront in safeguarding gains the brand has made, she says.

Bidco Plans to Grow Turnover to USD 1 Billion by 2021