The pieces, curated by CcHUB and designed by Mayowa Alabi, are created using digital illustration which comes to life when viewed through an augmented reality app called 'Artivive' 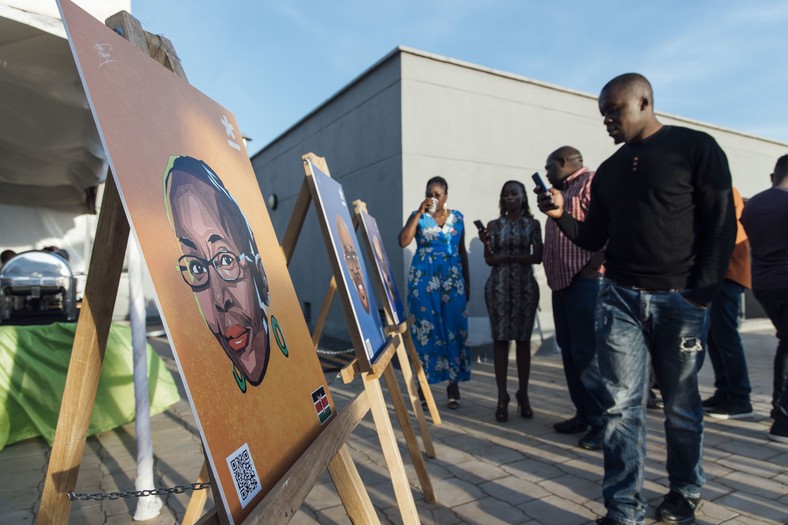 The AR exhibition launched officially on Wednesday showcased technology and innovation champions such as Jason Njoku, Iyinoluwa Aboyeji, Funke Opeke, and Rebecca Enonchong who were selected for having contributed immense value to the growth of the innovation and technology ecosystem on the African continent.

The pieces, curated by CcHUB and designed by Mayowa Alabi, are created using digital illustration which comes to life when viewed through an augmented reality app called ‘Artivive‘ (available on iOS and Android devices). The app is placed over the piece in order to enhance it and create new dimensions of the art, whereby viewers will also download information about the subject’s journey in the tech world.

Speaking at the event, Bosun Tijani, CEO at CcHUB stated that technology is Africa’s fourth industrial revolution; it is powering and impacting the lives of millions.

“There are a number of personalities from across the continent who have been integral to promoting the technology-at-scale agenda in Africa. Nyota is a recognition of these tech leaders, and we are thrilled to be celebrating their work through this incredible augmented reality exhibition,” Tijani added.

He noted that those included have come up from the trenches paving the way for others in a sector still in its relative infancy, albeit one that is making a massive impact on how Africa operates.

“Nyota is a marker celebrating all that Africa’s technology sector has achieved to date, whilst recognising how much more there is to do. Thank you to all of those who are part of the exhibition – we are happy to share your story and your success with the world via Nyota, an intersection between art and tech in Africa”.

The exhibition features 24 of Africa’s tech trailblazers who have paved the way for African tech.

Nyota artist, Mayowa Alabi Damilola, also known as Shutabug, is a multidisciplinary creative with strengths in Graphic/Motion Design, Photography, Cinematography and Vector Illustrations. He has over five years of professional design experience working as a graphic designer, and then Creative Lead, at Co-Creation Hub Nigeria. His illustrations are created with lines and are largely influenced by the Lagos city life.

His art career officially kicked off after he won the European Union/United Nations Women Gender Equality Picture It Comic & Cartoon Competition in 2017. He had his first solo exhibition tagged, “Lati OjuKokoro” shortly after winning the competition.

Ghanian scholar and his love for Africa and entrepreneurship