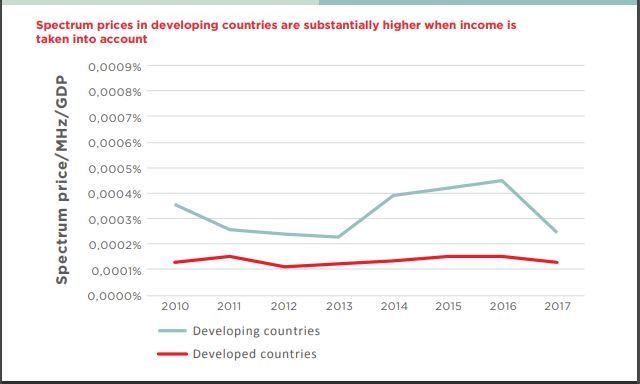 Titled; Spectrum prices in developing countries’, the study, released on Tuesday at the ‘Mobile 360- Africa conference in Kigali, said the high spectrum pricing- which relates to charges on radio frequencies allocated to the mobile industry and other sectors of communication over the airwaves- has become a major roadblock to increasing mobile penetration.

And to improve the economic and social welfare of the billions of people that remain unconnected to broadband services, the report said stakeholders in the telecommunications sectors in developing countries need to introduce better spectrum pricing policies.

Authored by GSMA Intelligence, the study also found that governments are playing an active role in increasing spectrum prices to maximise state revenues from spectrum licensing, with high spectrum prices linked to countries with high levels of sovereign debt.

“For far too long, the success of spectrum auctions has been judged on how much revenue can be raised rather than the economic and social benefits of connecting people. Spectrum policies that inflate prices and focus on short-term gains are incompatible with our shared goals of delivering better and more affordable mobile broadband services.”

“These pricing policies will only limit the growth of the digital economy and make it harder to eradicate poverty, deliver better healthcare and education, and achieve financial inclusion and gender equality.”

To compile the GSMA study, the authors assessed over 1,000 spectrum assignments across 102 countries (including 60 developing and 42 developed countries) from 2010 through 2017, making it the largest-ever analysis into spectrum pricing in developing countries, as well as the drivers and their potential impacts of spectrum pricing on consumers.

Among the countries included in the analysis are Algeria, Bangladesh, Brazil, Colombia, Egypt, Ghana, India, Jordan, Mexico, Myanmar and Thailand – all markets where spectrum licensing is a priority.

Meanwhile, GSMA Intelligence also launched its latest Mobile Connectivity Index, which measures the performance of 163 countries (representing 99 per cent of the world’s population) against key enablers of mobile internet adoption. The Index highlights recent progress made on widening access to the mobile internet and explores key roadblocks to adoption, including spectrum policy.

At the end of 2017, 3.3 billion people- or 44 per cent of the global population- were connected to the mobile internet, representing an increase of almost 300 million compared to the previous year.

That still leaves more than 4 billion people offline and unable to realise the social and economic benefits that the mobile internet enables. The majority of people that remain unconnected – 3.9 billion – live in developing countries.

Mobile broadband networks still do not cover 1 billion people globally, and approximately 3 billion people who live within the footprint of a network are not currently accessing mobile internet services.

In low-income countries, the report reveals, around two thirds of rural populations are not covered by 3G networks. The Mobile Connectivity Index highlights the importance of factors such as the affordability and quality of mobile broadband services, and network investment in connecting people, both of which can be impacted by high spectrum prices.

“If mobile operators don’t get affordable and predictable access to spectrum, it will be consumers who will suffer the most,” said Pau Castells, Director of Economic Analysis at GSMA Intelligence.

“Developing countries have the opportunity to catch up with the developed on mobile adoption; however the investment case in some of these markets is being put at risk. Operators cannot keep paying significantly more for spectrum when consumer incomes and expected profits are much lower in these markets.”

“This is making network investment challenging at a time when policies should encourage the development of the mobile sector to maximise the benefits it can bring to everyone.”

More than half of sub-Saharan Africa to be connected to mobile by 2025, new GSMA study reveals

Manufacturing sector poised to grow, but where is the storage?