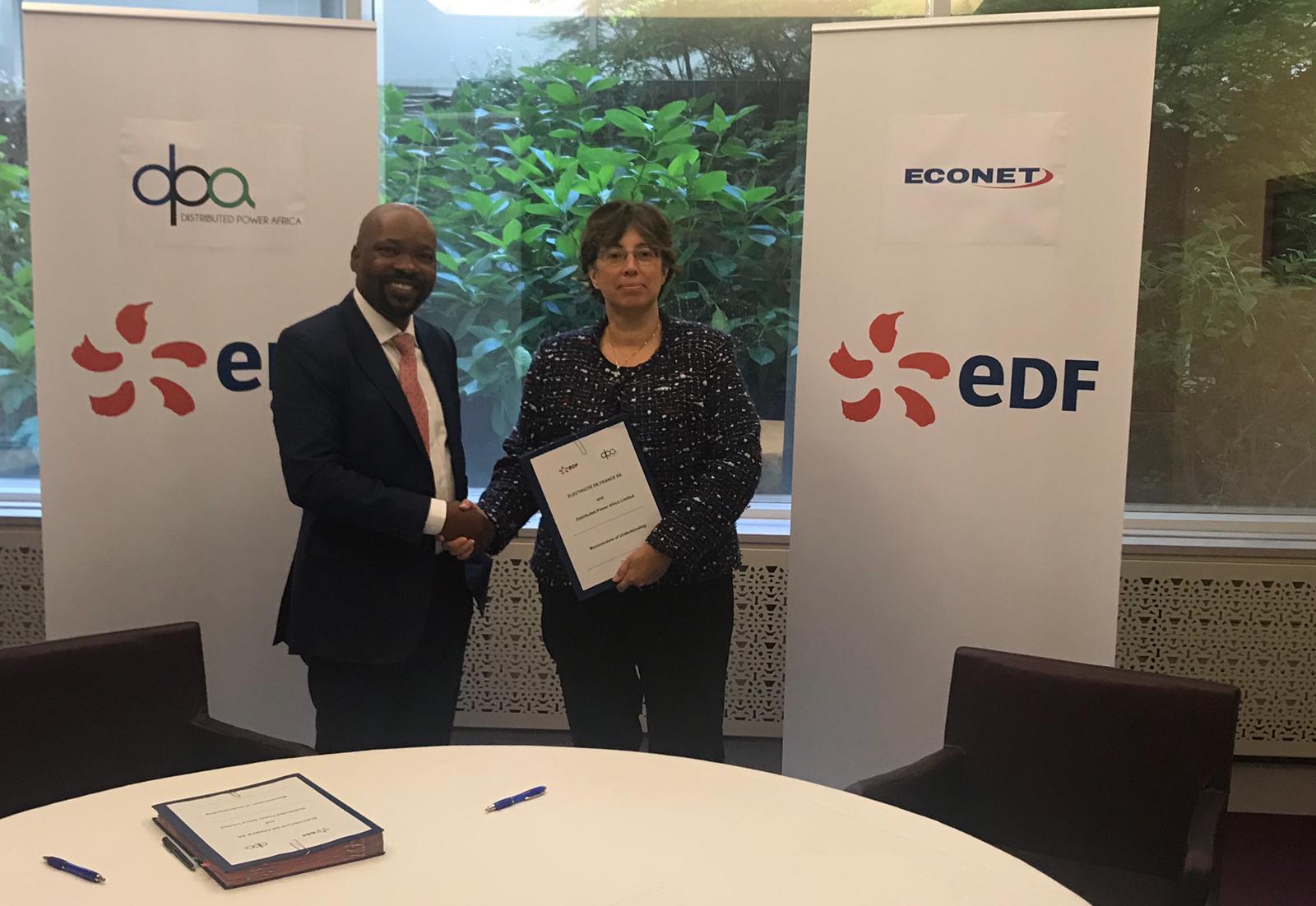 The partnership will focus on the development of distributed-energy solutions based on solar panels associated with energy back-up systems such as batteries. The two companies plan to deploy their solutions by setting up power businesses in sub-Saharan Africa, which will initially include South Africa, Ivory Coast and Nigeria, with the intention to expand into other key markets.

The intention is also to accelerate the deployment and roll-out of Green energy across Africa, with EDF acting as a technology partner for DPA projects in Africa. Distributed Power Africa will leverage EDF’s capabilities and vast experience in renewable energy and utilize these solutions to develop and grow their pipeline in Africa.

In 2018, DPA marked its entry to Kenya by signing a partnership deal with East African Data Centre (EADC) in to install solar panels on its premises to ensure that it consumes 100 per cent of renewable energy resulting in 4.5 million savings per year.

According to a 2018 report by the Kenya Association of Manufacturers (KAM, the manufacturing sector consumes about 65% of all power produced in Kenya. The country’s renewable energy in 2017 made up 87% of the energy mix. DPA’s entry into the market is a move meant to scale this up to ensure that Kenya achieves its goal of having a green economy by 2020. DPA will offer solar energy financing at 0% start-up cost.

Econet founder Mr Strive Masiyiwa commented on the partnership saying, “The problem of power in Africa can only be solved by empowering entrepreneurs and encouraging Public-Private Partnerships that drive capital into the sector.”

“Energy is the next biggest infrastructure opportunity in the journey to transform the continent’s fortune. A partnership with a global player such as EDF; with vast technological expertise and access to energy markets, will accelerate the rollout of energy in the continent and significantly impact the continent’s economies.” he added.

“Enabling reliable and stable energy to businesses will help meet the continent’s global economic growth goals. In the Telecoms industry for instance, we observed a 1% increase in GDP for every 10% increase in tele-density. In the Energy sector therefore, we expect a tenfold increase in GDP by addressing the continental power challenge,” Mr. Masiyiwa concluded.

EDF Senior Executive, Vice President International – Marianne Laigneau had this to say: “We are excited about  partnering with one of the most respected Pan African brands  that benefits from an extensive footprint on the African continent and a proven track record of operating in some of Africa’s most challenging environments. For EDF, this partnership represents an opportunity to expand our services into the burgeoning distributed energy sector. Already active in renewables, grids and energy-efficiency services in 15 African countries, EDF has the necessary expertise to deliver comprehensive energy solutions perfectly suitable for African C&I applications.”

According to Norman Moyo, Group CEO of DPA Africa, “Businesses in Africa are increasingly interested in affordable and reliable energy security. The replacement of generators with solar technology has become a rising trend due to the associated financial savings and environmental dividend.  Distributed Power Africa has received tremendous interest from the Commercial and Industrial sector for reliable and clean energy solutions including solar power and battery back-up technology.”

Currently, about two thirds of Africa’s population i.e an estimated 600 million people do not have access to electricity. This demand keeps growing synonymous to the continent’s population which is expected to double to about 2.5 billion people in 2050.

At the same time unreliable energy sources are an impediment to economic growth as productivity is cut short by the frequent power outages which also pose high operational costs to businesses that result to using generators and other alternative power sources. However, increasing electricity supply, improving energy access and reliability of supply will require a co-ordinated and concerted effort by both governments and the private sector.