DTB’s profit grows a per cent in end year results 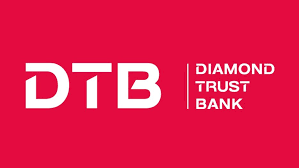 Diamond Trust Bank (DTB) has announced a 9 per cent increase in pre-tax profit to Kshs11 billion for the year ended 31st December 2018.

“This performance is anchored on the Group’s market positioning and long history in the East African region serving these customers. A solid shareholder base also augments our inherent strength,” Ms. Devji said.

The Bank’s non-performing loans dropped from Kshs13 billion to Kshs12.1 billion. And it maintained a high liquidity ratio of 53.5 per cent at the end of 2018, compared to the 20 per cent minimum prescribed by the regulator.

It is also one of the highest capitalized banks in Kenya, with the ratio of core capital to total risk weighted assets standing at 18.7 per cent, against the 10.5 per cent minimum required by the Central Bank.

DTB’s board proposed a first and final dividend of Kshs 2.60 per share which is the same as the previous year with earnings per share increasing from Kshs 23.73 to Kshs 23.91