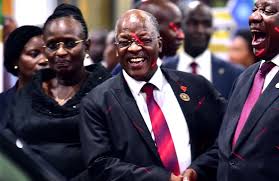 President Uhuru Kenyatta has directed that Kenya will observe a seven-day period of national mourning in honour of the late Tanzania President John Magufuli.

Addressing the nation from State House on Thursday, Uhuru said the flags of the East African Community and Kenya’s national flag be flown at half-mast throughout Kenya and all diplomatic missions abroad from today until the sunset on the day of Magufuli’s funeral.

“Magufuli was a champion of Pan-Africanism. I have lost a friend and  an ally. Africa  and the world has lost a leader who steered the EAC and the continent,” he said.

“On behalf of the government and people of Kenya I convey our sincere condolences to the First Lady of Tanzania, Janet Magufuli.”