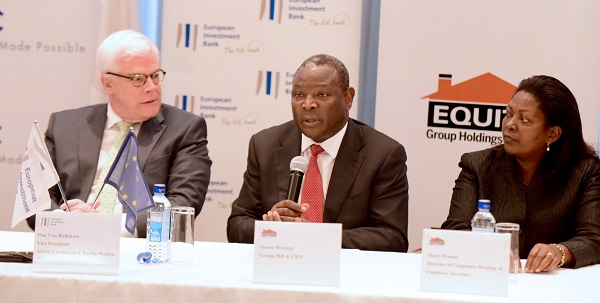 The on-lending will be available in USD or local currencies with the objective of contributing to job creation and poverty reduction. In addition, Equity Group will benefit from a EUR 2m (Ksh 220 million) technical assistance program funded by the EIB to support its strategy of transforming branches into SME business centers.

“The credit lines signed today will not only benefit people in Kenya, but are meant for people in neighboring countries as well. Kenya is increasingly becoming a hub for the region on many levels and we as a Bank must look at this from a very basic point of view: there is a young and growing population with enormous potential, you need credit to support that momentum.” EIB Vice President Pim van Ballekom, responsible for operations in East Africa, said

Equity Group Managing Director & CEO Dr James Mwangi said “With this facility of Ksh 8.25 billion (EUR 75 million) we will be in a position to support up to 1000 regional companies with an average loan of nearly Ksh 10 million each thus assisting develop local entrepreneurs to compete at regional level furthering integration and cross border trade.”

Next to this, a EUR 20 million (Ksh 2.2 billion) credit line under the EIB’s East and Central Africa Private Enterprise Finance facility was signed with HFC Limited.

This credit line will support HFC in providing the much needed longer term financing to private enterprises and commercially operated public sector entities in productive sectors in Kenya, in line with EU and national development priorities. In addition, HFC will benefit from EIB funded technical assistance program aimed at strengthening capacity in line with its strategy.

Since September 2014, the credit lines in the region are supported by a EUR 5 million (Ksh 550 million) technical assistance (TA) programme to support financial intermediaries and SMEs over a 3 year period.

The programme will be extended for a further 3 years from April 2017 for an additional EUR 4.7 million (Ksh 517 million) and is coordinated out of Nairobi, with a permanent presence of consultants in Kenya, Tanzania, Uganda and Rwanda.

In the last seven years, the EIB has provided EUR 321 million (Ksh 35 billion) in credit lines for Kenyan businesses, which have benefitted nearly 800 Kenyan companies, creating over 9,000 new jobs in Agriculture, Education, Transport, Tourism, Trade and other sectors.