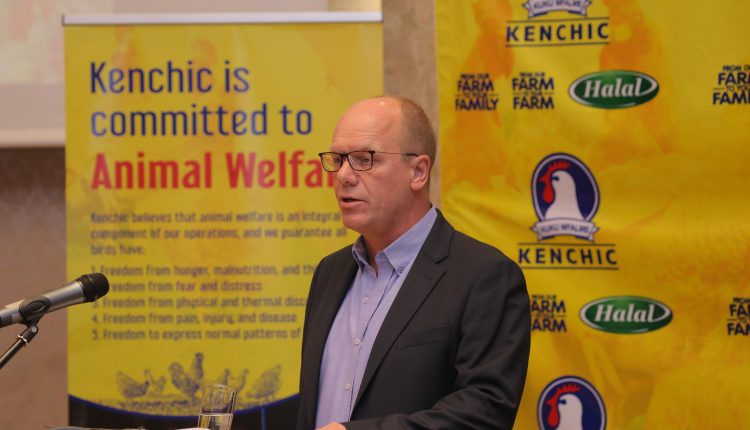 Thinking about the future of food safety in our region takes me straight to a starting point that is absolutely certain.

And that change will happen as we progress. Technologies are and will continue to change, circumstances will change, and ideas will change.

At Kenchic, the way we are thinking is evolving and that is affecting both food culture and business. This is led by the ideas and changing perceptions that will drive change across our industries.

If we look at our first principle, which is that the consumer has the right to fully know and understand how the food they consume is produced, and therefore will place demands on producers, ultimately it is the consumer that will drive standards in the food sector and create change.

This is a very different scenario from the past when awareness was lacking. Food safety and health scares in developed countries from the 1980s were key to driving change.  Consumers were not aware of food production methods and there was also a distinct lack of food safety standards. Food producers could mostly do as they pleased.

The food retail industry had to accept its position as one of the main partners of these food production companies. The competition between the big food retailers was mainly aimed at driving down food costs to attract consumers, and this exerted immense pressure on producers to again produce at the lowest cost.

This led to massive overuse of the likes of antibiotics, even if an animal was not sick, because they grew faster and cost less when antibiotics were used.  So, farmers started to indiscriminately use antibiotics – in feed or directly – and there was no framework, legislation, or standards to govern these practices. The impact was that some antibiotics humans needed to protect themselves became ineffective.

Encephalopathy – or what we know as Mad Cow Disease – arose through feeding cattle meat and bone meal that contained BSE-infected products from a spontaneously occurring case of BSE sheep products. What was the scariest about this what that it was passed onto some humans, whose nervous systems and brains were affected just as the animals?

I could go on and on about other food safety breaches, but we must understand that at the time, we were not really aware of the potential outcomes. Concerns were voiced, but a lack of regulatory procedures and, to be honest naivety, allowed these production methods to continue.

Once science really understood the links between some production methods and their harmful effect on food safety and human health, the world woke up. Media jumped on the stories, which drove consumer awareness and that in turn drove regulatory controls. The Food Standards Authority in the United Kingdom was quickly formed as well as similar bodies across most of the developed world.

Traceability and food production audits arose. The whole process of farm to fork, plow to the plate was born – consumers now started to gain trust and understanding that the food they purchased was produced properly, was wholesome, and most importantly could be trusted. It is the reason why Kenchic adopted the farm-to-fork approach, meaning that every egg we hatch, every chicken we raise, and every cut of meat we process, is traceable.

This is not only just good agricultural practice, but a moral aspect arose – that of animal welfare standards. Many now believe that animals must be treated with respect concerning their natural and behavioral character.

But all of this does not mean that there have not been issues, especially concerning contraventions of good agricultural practices.

While the consumers’ awareness has grown, there is still a lack of traceability of the food chain. Horse meat was found in ‘100%’ beef minced meat, traced interestingly through DNA methods. The movement of animals from country to country, with no audit trail, allowed traders to muddy the waters of tracing the origin of the food. That was only 10 years ago, in Europe.

This aside, a standardization of food production and processing has taken place. Every primary agricultural producer, to access markets, must adhere to clear and laid down standards. This is also expected of processers and retailers.

So where are we in Africa?

Our region and Africa at large is a quick adopters of technology that was developed and tested elsewhere. It penetrates and is adopted quickly without its initial glitches.  Even more importantly, the continent is now developing its own technology – Africa is a quick learner.

Freedom and ease of travel, easy access to international media, and most recently the development of social and digital platforms, means we are in a genuine global space – news travels fast

International brands – in food retailing, quick service restaurants, and hotels with private equity investors continue to invest, and with that comes their exacting international standards.

But still, there is a distinct lack of awareness by the consumer – a misinformed understanding of safe food production methods and standards.

The standards are there, but they are not imposed in a fair and consistent way. For this to be achieved, a level playing field must be achieved, which means all producers must be held to the same standards.

Also, these standards need to be clearly communicated to consumers so that they know their rights.

Kenchic has always adhered to global standards. As the region’s largest chicken producer, we have sought and achieved the highest attainable international ratings on food safety, including as a top-tier, diamond producer by global standards, according to YUM Brands, which is the group that owns KFC and Dominos Pizza.

Our plant has also achieved the highest possible global food processor certification. We have an in-house laboratory, which is the only one of its kind in the region. It ensures we test our products before they go to the market to rule out antibiotic residues and microbial contamination that could cause food-borne illnesses such as Typhoid amongst others.

Our processing plant products undergo rigorous quality checks, both internally and at a state level, and they are maintained in a cold chain until the minute they land on your table, and that’s our promise to our consumers.

We ensure that all our farms and hatcheries adhere to the strictest biosecurity and animal welfare protocols laid down by reputable global organisations, such as the World Organisation for Animal Health. For over 25 years we have been able to audit our entire process to international standards.

Also, Kenchic believes that animal welfare is an integral component of our operations, as a good human -chicken relationship is paramount to good farm performances.

Kenchic birds enjoy world-class levels of welfare, guaranteeing the five internationally upheld animal freedoms to ensure they live healthy and contented lives. These are freedom from hunger, malnutrition, and thirst, freedom from fear and distress, freedom from thermal and physical discomfort, freedom from pain, injury and diseases, and lastly, freedom to express their natural patterns of behaviour.

We believe there is a clear connection between animal welfare, food safety, productivity, and consumer preferences. We strive to ensure all our chickens are kept in the very best conditions to ensure food safety.

The future for Kenchic remains to be at the forefront of food production standards, which means we will also assist and work in frameworks to develop sustainable processes with the government and like-minded companies.

The future of food safety and culture is bright as long as consumers to producers play their role in ensuring we aim for the best.