Increasing incidences of fake currency syndicates, money laundering schemes and cybercrime are the latest threats neutralizing glory of one of country’s most vibrant sectors 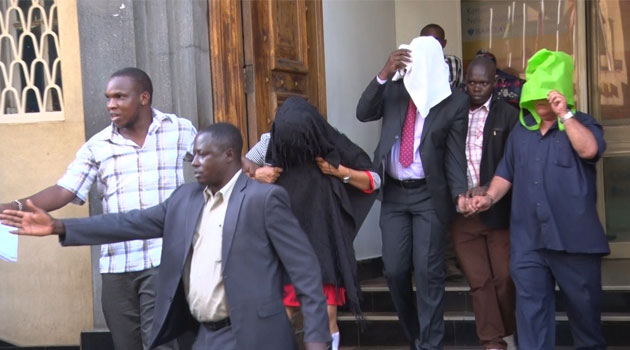 Kenya’s banking sector has made incredible milestones in recent decades, but the gains are now facing a huge threat from increasing cases of fake currency syndicates, money laundering schemes and cybercriminals.

On 27th February this year, for instance, a large syndicate of fake currency estimated to be worth Ksh. 32 Billion was recovered in a residential house in Ruiru, leading to the arrest of three suspects.

Two days earlier, a leading Kenyan businessman, Mr Nashud Merali, had been defrauded Ksh. 10 Million by people who posed as President Uhuru Kenyatta. Mr Merali had just instructed his Finance Director, Akif Butt, to pay the fraudsters when detectives unraveled the network, arresting seven people in connection to the crime.

And mid this month, a group of detectives spent hours at Barclays Bank Kenya-Queensway branch tracking the masterminds of a safe that was hidden within the bank with fake currencies worth Ksh. 2 billion. Seven people would later be arrested for questioning, with the officers impounding the safe as well as some fake gold the suspects were said to have been trading in.

The latest incident at Barclays Kenya is one among several cases of fake currency syndicates that have in the past rocked the country. In October 2016, two people were arrested at the Jomo Kenyatta International Airport (JKIA) with fake 267 Million Euro notes in 500 Bills on their way to Dubai.

Exactly two years later, three other people- a Chad national, his son and a Kenyan counterpart- were arrested for suspicion of being in possession of about 0ne billion counterfeit US dollar and Euro notes.

“When you look at where the money is being circulated, that is where things fall down in the Kenya context. The problem is there has not been an in-depth study on what the value of fake cash is and how much is in circulation.”

But despite such cases being on the rise lately, Ms Rodrigues says white-collar crimes don’t rank highly in the country. Her main concern is the low investment placed in upgrading the investigative services for such crimes, which facilitates collusion between perpetrators and people within the law.

In a report published by Central Bank of Kenya (CBK) in June 2017, the banking regulator reveals that 97 per cent of fraud dealing with Mobile Money agents involved counterfeit notes. In 2015 alone, 24,562 cases of fake cash printing syndicates were reported, with Agents dealing with Safaricom being the main target, the report notes.

CBK had mid-2017 warned of a possibility of a transnational fake currency ring within Nairobi, the reports coming just months after the regulator held a joint meeting with other EAC central banks and the Eastern Africa Police Chiefs Cooperation Organization (EAPCO) to develop strategies for enhancing the fight against Counterfeit Crime.

In a Criminal Appeal 10 of 2012 at the High Court of Kenya (Nairobi Law Courts), a sentence delivered by trial Magistrate Lady Justice Lydia Achode quoting Section 367(a) of the Penal Code, the Magistrate read:

“Any person who, without lawful authority or excuse, the proof on which lies on him makes, uses or knowingly has in his custody or possession of any paper intended to resemble and pass as a special paper such as provided and used for making any bank notes or currency is guilty of a felony and is liable to imprisonment for seven years.”

Generally, an influx of counterfeit currencies in an economy has huge negative impact to both the state and financial institutions. The crime could lead to devaluation of currency and ultimately inflation, risk of increasing black market activities, dumping of goods at cheaper rates, non-reimbursements by banks and loss of public confidence.

If not controlled, counterfeits could lead to uninsurable risk, which has harmful effect on the reputation and functioning of a Central Bank.

As the Kenyan government tackles counterfeit currencies, two other challenges are slowly creeping into the banking sector- money laundering and cybercrime.

Early this year, five leading banks, including two foreign banks and one local, got on the radar of the Director of Criminal Investigations, George Kinoti, after they were accused of aiding in the laundering of at least Ksh1billion looted from National Youth Service in 2016.

The Banks- Standard Chartered, KCB, Equity, Diamond Trust and Cooperative, are said to have allowed some key suspects in the Ksh8billion NYS loot to move huge sums of money into their accounts. CBK would later impose Ksh392.5million penalty on the banks to avert such cases in the future.

The local banking sector was also on the spot in 2016, when Imperial Bank went down following the loss of close to Ksh29billion soaked in fraudulent transactions. The collapse was blamed on some key managers at the bank as well as a handful of complacent staff from CBK.

In Kenya, illicit money laundering mainly originates from many places, among them smuggling drugs and graft. Most of the money is reported to be in cash, which finds its way into the economy by any means, the main reason bankers, retailers and other instrumental players are in most cases involved.

Money made from smuggling suppresses legitimate business and denies the government much needed revenues. For retailers, it means stakeholders such as suppliers and Kenya Revenue Authority (KRA) cannot be paid.

In 2013, CBK drafted Anti-money Laundering Guidelines for the Provision of Mobile Payment Services and provided the penalties and remedial measures as follows:

“A mobile payment service provider (or its Agent for the purpose of Anti-Money Laundering) if found guilty of an offence under the CBK regulations Act, the CBK may pursue any or all remedial actions provided under section 16 subsection 1,2,3,4,5 and 6 of the Proceeds of Crime and Anti-money laundering Act, 2009.”

President Uhuru Kenyatta then signed into law the Proceeds of Crime and Anti-money Laundering (Amendment Bill) in March 2017, promising that the law would be ‘a major tool in our sustained efforts to fight corruption.’

As authorities struggle to wrestle launderers and fraudsters within the industry, Kenyan banks must now also be on high alert following increasing reports of cybercrime in this era of technological innovation, as was the case in May 2017 when Wannacry computer malware attacked several softwares, including those for banking institutions, affecting over 200,000 victims globally.

However, in an interview with the East African Business Times magazine late 2017, Habil Olaka, Chief Executive of Kenya Bankers Association allayed such fears, stating that before commercial banks deploy any new product or service, a rigorous review of the risks associated with the product or service is undertaken.

“Banks have invested a great deal in resources, systems and procedures to ensure that products delivered to their customers meet the expected standards.  This is partly the reason why the industry is sometimes seen to be lagging behind fintechs in deploying innovations,” the CEO said.

It remains to be seen how industry players will tackle the creeping threats to ensure local banking sector retains its glory.

How to Build a simple Brand that stands out