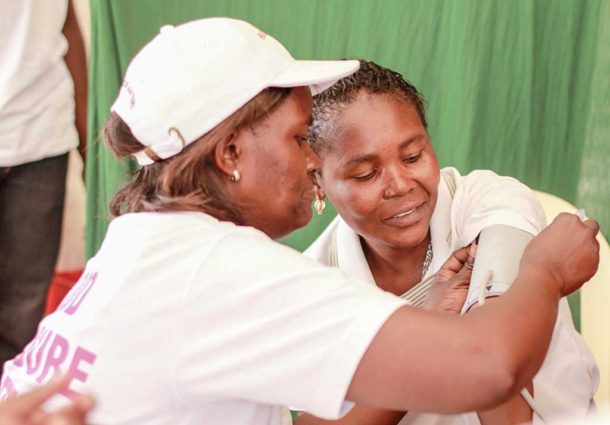 In a bid to control deaths caused by hypertension, the Ministry of Health of the Federal Democratic Republic of Ethiopia through a partnership with AstraZeneca, Thursday, launched the Healthy Heart of Africa Program.

Healthy Heart for Africa, a program launched in Kenya in October 2014 and has since conducted 1 million hypertension screenings in the country, currently has over 250 facilities which have trained over 2,600 healthcare workers across 21 countries.

On the other hand, Federal Democratic Republic of Ethiopia’s Ministry of Health engaged the program within the framework of its strategy for combating Non-communicable diseases, focusing on tackling hypertension as a key contributor to the burden of such diseases in the country.

Aimed at strengthening nationwide awareness, prevention, control and treatment of hypertension, the initiative was structured around three pillars including education and awareness about hypertension as a condition that is preventable, easily identified and treatable.

Additionally, it was intended to increase awareness among healthcare workers to optimize performance and drive hypetension care to lower levels of the healthcare system.

It was also to facilitate conditions for easier and more accessible diagnosis to tame the disease complications.

During the launch, Federal Minister of Health of the Democratic Republic of Ethiopia, Dr. Kesetebirhan Asmasu said, “Ethiopia has made greatin its fight against communicable diseases. We believe that addressing the burden of hypertension through enhanced diagnosis, treatment and training, we will achieve, even surpass the goals set out on our NCD strategy.”

On the other hand, Tarek Rabah, Vice President for Africa at AstraZeneca, stated: “It’s an absolute pleasure and honour to be working with the Ethiopian Government in support of their progressive National Strategic Action Plan for Non-Communicable Diseases. This partnership is a hallmark example of how public and private institutions can collaborate to address the rising tide of non-communicable diseases in Sub-Saharan Africa.”

She added that they looked forward to supporting Ethiopia’s fight against hypertension and cardiovascular disease more broadly by sharing their experties to help the Federal Ministry of Health achieve its ambitious chronic disease targets.”

According to reports, hypertension or high blood pressure contributes to the development of cardiovascular disease which accounts for approximately 17 million deaths annually worldwide, making it one of the leading killer diseases.

Hence, the Ministry of Health of the Federal Democratic Republic of Ethiopia with AstraZeneca’s Healthy Heart for Africa may control the deaths caused by hypertension.