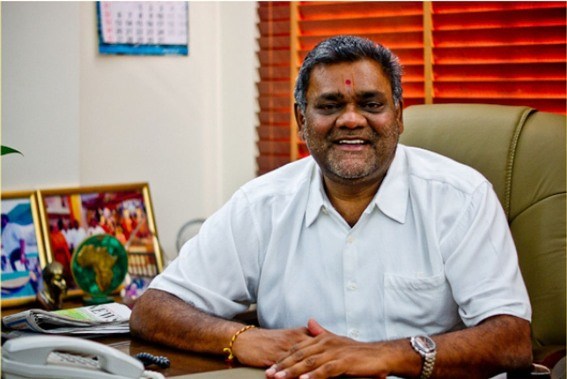 Subhash Patel, the Founder and Group Managing Director of Motisun Group is not the flashy loud-mouthed Executive. In fact, he avoids the limelight. Yet he deserves it. In the last 22 years, Subhash Patel, a self-effacing man of simple habits, but with a long-term vision has built Motisun Group into a multimillion-dollar business that straddles the Tanzanian manufacturing sector like a colossus.

The story of Motisun Group is similar to a number of Tanzania’s leading multinational companies. Its history can be traced back 80 years when Subhash’s father started a small shop in a village called Lugoba.

“I started my entrepreneurial life as a shopkeeper in my father’s shop and later on as a trader selling spices. In 1976, I decided to try my hand at the automobile business and started my spare parts business. As the business picked up, I went on to open my own garage in 1977.”

In the early 1990s, as Tanzania slowly emerged from a socialist economy that was not friendly to investment, Subhash took the opportunity of the improved business environment to invest in a small Steel Mill in 1994.

Since then, Subhash has gone on to build a business empire that not only is the largest manufacturer of steel sheeting and pipes, but also rubber, paint and fizzy drinks. It also runs one of the finest hotel and resort chains in Tanzania under the Sea Cliff and White Sands brand names. The single thread that binds all these businesses is quality, service and value.

diatonically So, how did Motisun Group grow from a retail shop into the undisputed steel manufacturer in east and central Africa?

Subhash says that one of the company’s strategies has been to establish facilities in what are essentially nascent and ripe markets.

Since establishing the first Steel manufacturing plant in Tanzania, the company has continued to expand throughout the region. In early 2011, it invested in a US$ 50 million state-of-the art facility with a processing capacity of 150 tons of steel a day in Zambia.

With a cold rolling mill processing 5000 tons of steel a month and new galvanizing line, the Zambian factory is capable of producing 48000 tons per annum to serve the local market in addition to exporting to the east African and SADC regions.

A year later, the company went down into Uganda investing in as US$60 million steel coating manufacturing plant, the first of its kind in the country. The plant produces galvanized coils for the manufacturer of roofing sheets, color and coated coils.

Subhash does not stop here; he has spotted an opportunity in the fast developing economy of Mozambique and its requirement for steel to develop its infrastructure and residential housing needs. A modern new steel plant in Nacala, Mozambique operations ramp up. Quick deployment, employing the best technology, training of the workforce, an able and responsive management have all played a role in laying a solid foundation for future business expansion and growth.

Motisun Group has set its vision far and wide. In its efforts to diversify, Motisun Group has kept sight of the need to bring innovation and value to the markets in which it seeks to enter and currently operates. This vision cannot be better seen than in the hospitality sector where it has made a palpable difference.

Pearlsun Hotels, a subsidiary of Motisun Group owns and operates some of the finest beach resorts and hotels in Tanzania and has plans to grow beyond its borders. These getaways offer an experience that is truly unique. The beaches are spotless, and natural setting, breathtaking and a customer service that is par excellence.

Kiboko plastics under Motisun Group is also one of the largest manufacturers of PVC and HDPE pipes, water tanks and fittings for water management, irrigation, water distribution and sewage disposal systems in the country. The products are sold and distributed through a nationwide dealership network as well as exported to adjoining countries.

Kiboko paints, another company under Motisun Group is counted among the leading paint manufacturers in the country. In the span of 7 years, Kiboko paints has become a household name in Tanzania offering a quality and yet cost effective solution for every painting need.

Motisun Group, has a sizeable presence in real estate and is extending its reach in other business sectors such as cement and mining to offer a complete array of products for the East African economy.

More than a company

Through its operation in the four countries in east and central Africa- Tanzania, Zambia, Mozambique and Uganda- MMI Steel, a Motisun Group company, provides both direct and indirect employment for more than 6000 people. One of the contributing factors to the Group’s success, according to Subhash, has been the fact that the Groups employees not only view the company as the source of their income, but their home.

“Over the years we have focused on providing training to our employees rather than going for experience.” He adds that at least 95 per cent of employees have been trained in-house.

“When employees are trained in-house, they are more passionate about the firm and stay with us for long, which is a win-win situation.” Apart from training, the employees also enjoy other benefits such as medical and counselling services, breakfast and lunch.

Trying it all together is the Motisun Group’s vision and mission and that places a premium on quality, service and value. It has been the standard bearer for the company’s employees in focusing their efforts in creating a better experience for their customers be it in product or service.

Over the years, there has been a strong conviction that the region’s economy is on the rise, but Subhash says that there is need for significant investment infrastructure. “It is expensive to set up ventures in most countries in the region. Infrastructure and tedious red tape prove a challenge for investors.”

In order to change the equation, Subhash advices that governments create enabling policies for investors. He gives an example of its Zambian entry. “Initially, the government was skeptical, but when we started business, they saw what we were bringing in and they welcomed us.” He advises investors to find innovative ways of overcoming the challenges.

Mr. Subhash says Motisun has already been issued with mining rights for iron and coal. “We are currently on the exploration stage and we will soon start mining.” He adds that he is also looking at venturing into cement production.

“Cement production in this country has very good prospects. The real estate industry is also experiencing some vibrant activity.” With the discovery of oil and gas in Tanzania, he is not ruling out the possibilities of venturing into that sector. “We have not thought about investing in that field yet. However, there are a lot of things we could do in that sector. For instance, with our expertise we could produce gas cylinders, but when the right time comes, we will explore all options.”

Entry into a business is always done after a due diligence of the fit between our competencies, market needs and business potential.

Motisun Group has given a corporate social responsibility a high priority. Being a good corporate citizen gives Motisun Group, a high social standing amongst the local populace for the many works done to uplift and alleviate their hardships.

Subhash Patel is well known and loved for his charity and philanthropy. Subhash also sits on the board of Bagamoyo district fund, which has helped build schools, hospitals, dug boreholes and even churches for the local community. Most importantly, he is a religious leader and often leads prayers at his local temple in Dar-es-Salaam.