Earlier today in Nandi county, a demonstration ensued between the residents and police when the police guarding the Pharmacy and Poison Board Officers in their inspection was agitated.

In return, a cop from the Kapsabet Police Station in Nandi county is left nursing injuries at Nandi Hills Sub-County Hospital after he accidentally shot himself injuring his right leg.

The inspection aimed at various clinics and chemists brews this eruption of protests after the officers had arrested Celestine Jepchirchir a herbalist in Nandi Hills town even after she sowed all the legal documents.

Jepchirchir stated that they had just arrived in a black car and without stating who they were pushed her towards their vehicle as they carried away boxes full of drugs which sparked the residents into screaming for her safety.

Thereby a pressure built as commotions erupted in the process which saw an officer cock his gun towards the ground in an attempt of dispersing the crowd though in the action shot and injured his leg.

A resident recounts the incident to have sparked lots of screams and confusion as the residents were trying to find out what had happened.

The officer was rushed to Nandi Hill Hospital for first aid and treatment following his bleeding leg and the Nandi East Police Commander Walter Abondo confirms he is in a stable condition a reaffirmation of the incident.

This occurrence comes barely a fortnight since the demise of Hon Sankok’s son after allegedly shooting himself with his father’s gun.

It’s due to these numerous gun violence incidents that as a people there is a need to reconstruct the armament laws governing Kenya.

If only there would be a strict governing system enforced against carrying of weapons by the police anyhow unless it’s in a danger zone as well as the elected leaders, just then perhaps lives can be saved.

Several decades from attaining independence are evidenced by the normalization of army weapons circling the Kenyan streets in hands of law order implementers.

Which questions the essence of the machinery and high armament within the nation while the country faces no attack from exterior forces or foes. 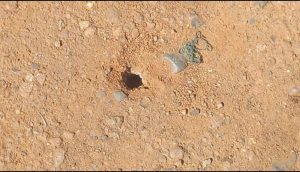 Perhaps its high time diplomacy is upheld in solving issues within as effort is made towards curbing stray bullet murders, extrajudicial killings, and ego-driven attacks from those in ownership of weapons.

The nations of Africa had peace way before the precolonial period a paradigm that shifts incessantly as there’s witnessed several deaths due to gun violence with most going unsolved and unaddressed.

As for a people to live in peace, there has to be acceptance of equality so as not to subject others to inferiority.

The gun issue is an alarming case as evidenced by the occurrences that if not solemnly dealt with might lead to uncontrollable gun violence in the nearby future.

The wise once stated prevention to be better than cure, to attain a fair and just society, there has to be an evaluation of most actions assimilated from the white rulers and embark on a mission to state new guidelines.

This comes in handy since generations and times have evolved necessitating a need for transition from the old ways of doing things to adopting a new accommodating, challenged, and well-discussed ideology.

Together Kenya can be saved for Kenyans by Kenyans.