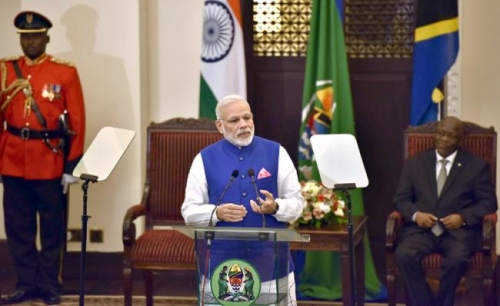 Indian Prime Minister Narendra Modi made his maiden tour to Africa in July. Key among his four-leg tour was a visit to East Africa, a region with a lot of historical ties with the South Asian country.

The visit to Kenya and Tanzania was seen as a move to boost his country’s economic influence in the region. Since taking over office two years ago, Modi has taken a strategic approach to improve his country’s foreign policy engagements as well as increase trade partners.

Trade in East Africa has, in the recent past, been dominated by China, whose trade with the continent hit the US$200 billion mark in 2015. Of India’s total exports of US$310 billion in 2015, Africa accounted for a paltry US$32.8 billion.

However, Modi’s visit comes as the Chinese economy decelerates, with data indicating Africa’s resources are also dwindling. Bilateral trade between Africa and China has dropped since late 2014, leaving African economies vulnerable. In November last year direct investment in Africa dropped by more than 40 per cent to about US$1.2 billion in the first half of the year.

In Tanzania, which was the PM’s first stop, the two countries signed memoranda mostly on improving agriculture and food security. In a joint press briefing with host President John Magufuli, Modi said the two nations were seeking to enhance exports between the two.

Between January and September last year, the volume of trade between the two countries was US$2.8 billion. Tanzania’s top exports to India are gold, fresh or dried coconuts, Brazil nuts and cashew nuts.  India on the other hand exports mostly pharmaceuticals and machineries.

The two nations agreed to work on the development and use of natural gas. This comes after Tanzania early this year announced that it had discovered about 2.7 trillion cubic feet of gas in Ruvu Basin.  Other agreements included MoU on water resource management and development. India agreed to provide line of credit of up to US$92 million for rehabilitation and improvement of water supply system in Zanzibar.

Other agreements include a pact between the National Small Industries Corporation of India and Tanzania’s Small Industries Development Organisation for vocational training as well as a MoU on visa waiver for diplomatic or official passport holders.

The two nations also reaffirmed their commitment towards combating terrorism and climate change.

In Kenya, Modi began his tour by addressing Kenyans of Indian descent. He described Kenya as India’s “valued friend and trusted partner.”

Trade volumes between the two nations have grown steadily from US$5.1 billion in 2009 to US$8.9 billion in 2015. However, the trade balance is tilted in favour of India. Exports from India to Kenya include pharmaceuticals, machinery, steel products, power transmission equipment and automobiles. Kenya exports tea, vegetables, leather, soda ash and scrap metal, among other commodities.

One of the agreements signed was in the area of defence and cooperation. The arrangement will see staff exchanges, expertise sharing and training, cooperation in hydrography and equipment supply. The two nations also agreed to cooperate in the field of national housing policy development management.

Another MoU calls for cooperation in the field of standardisation, expertise sharing and mutual trade between the Bureau of Indian Standards and Kenya Bureau of Standards. The South Asian nation agreed to extend a line of credit to Kenya to the tune of US$15 million (the first tranche of US$30 million) to IDB Capital for development of SMEs.

The leaders also signed for the extension of A US$29.95 million line of credit by India towards the upgrade of the Rift Valley Textile Factory (Rivatex). They also agreed to revise the Double Taxation Agreement.

The key highlight of the PM’s visit was the announcement that India was going to fully finance a cancer hospital in Kenya. The facility will provide surgery, chemotherapy and bone marrow transplant for East Africans. Further, it will conduct research and training, saving the country US$100 million used annually by cancer patients seeking treatment in India.

The World Health Organisation predicts that by 2020, there will be 16 million new cases of cancer every year, 70 per cent of which will be in developing countries where governments are least prepared to shoulder the burden.

The Changing Face of Banking Industry