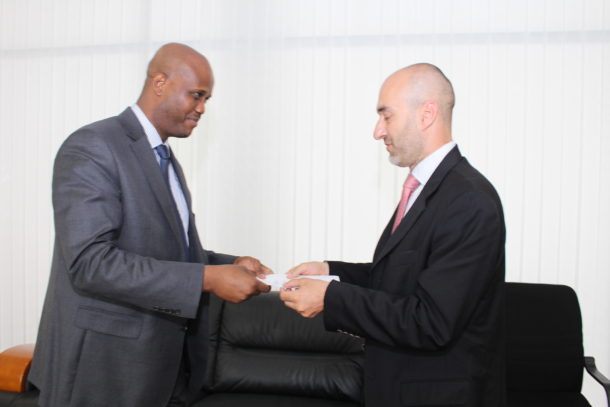 The Envoy (Roberto Mengoni), who is also the Italian Ambassador to the United Republic of Tanzania, presented his letter of accreditation signed by the Italian Minister for Foreign Affairs and International Cooperation, Hon. Paolo Gentiloni, to the EAC Secretary General, Amb. Liberat Mfumukeko, today at the EAC Headquarters in Arusha, Tanzania.

Welcoming Amb. Mengoni to the EAC Headquarters, the Secretary General commended the Italian Government and people for showing interest in furthering the existing cooperation between Italy and the Community.

Amb. Mfumukeko briefed the Envoy on the key millstones recorded in integration process and pledged to link up the envoy with the East African Business Council through which Italian investors could explore available opportunities.

On his part, Amb. Mengoni commended the EAC Secretariat for spearheading the integration agenda and highlighted a few areas that the Italian Government was interested in supporting the EAC, especially the Renewable Energy sector. He disclosed that his government was pushing for a policy change on Africa that will see a more robust engagement with the continent and the EAC.

Amb. Mfumukeko and his guest also discussed also the status of negotiations of the EAC-EU Economic Partnership Agreement and the Inter-Burundi dialogue. With regard to the Inter-Burundi Dialogue, Amb. Mengoni hailed the efforts of the Facilitator, H.E. Benjamin Mkapa, and the EAC Secretariat in spearheading the process and called upon all the parties and stakeholders to give peace a chance in Burundi.

Also present at the ceremony was the EAC Deputy Secretary General in charge of Productive and Social Sectors, Hon. Christophe Bazivamo.