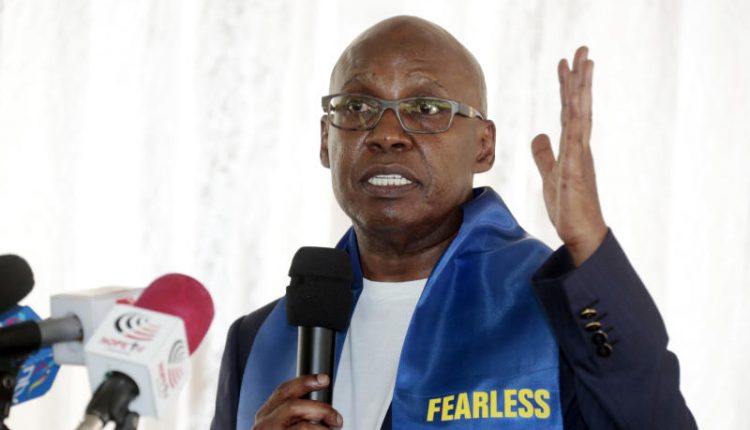 Presidential Aspirant, Jimi Wanjigi has condemned the Kenyan system terming it black colonialism which continues to oppress the people of Kenya.

Addressing the media, the rejected Safina Party presidential hopeful was dropped over an alleged lack of official certificate for his tertiary education.

He adds that from the constitution of 2010, there was an improvement from the earlier constitution that had laws sipped in during Mois Era which continually subjected the people of Kenya to dictatorship.

Wanjigi says, “during the 2013 elections there was hope that the government which would come in was going to empower that constitution and its inalienable rights one we were very proud of. It is evident that this government at the beginning made a move to claw back the envisaged gains of the 2010 constitution.”

“There was an attempt by this government to regularize and manage NGOs under a new PBO Act, a fight that climaxed in 2017 when after the general election and the debacle of that election. Certain NGOs and offices were vandalized by KRA and the police. Oppression of the alternate voice,” Jimi added.

Citing a failure by the government to curb terrorism they had draconian laws brought in parliament which would subject the people to the previous public Order Act that was very vicious in human rights.

Some of the laws were implemented this was a move clawing back the reforms of the 2010 constitution of Kenya.

Further speaking to the fourth estate of being in a state where their voices are muffled and ownership is intimidated, airs on the reforms on political parties that were effected to serve some purposes muffling voices of the people.

“Placing of a cap on the church’s registration only aims at silencing the churches and threatening them from speaking or they would be deregistered,” he says.

The Safina Party leader reiterates, “now we have seen this template before and it is one of dictatorship. I want to assure Kenyans that it was defeated before, we shall defeat it now.”

Inspecting impact: the anatomy of investing for sustainable developmentin Africa