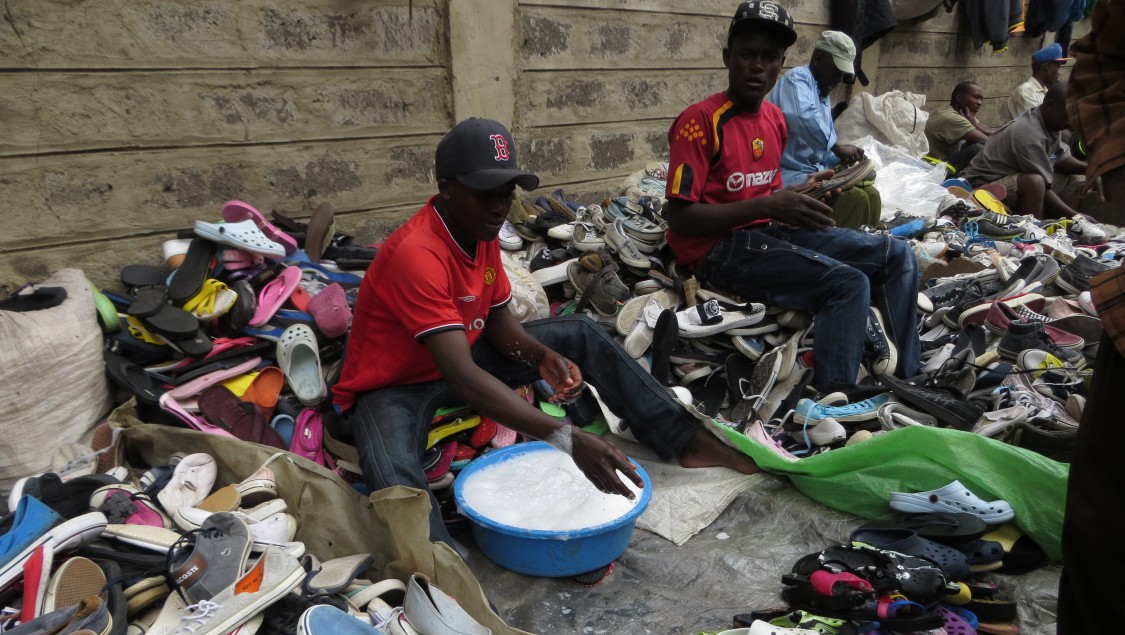 Bloc says textile sector can be brought back to life

Kinywa Mungai’s life will never be the same again once East African Community states effect a ban on the importation of secondhand clothes, popularly known as mitumba.

The 30 year-old father of three fears that his job and those of about 65,000 mitumba traders in Nairobi will be lost when the ban is effected.

He has been selling second-hand khaki trousers for 11 years, having started at the age of 19 at Muthurwa market, the second largest open-air market in Kenya’s capital city.

The mitumba business, he says, employs many youths, most of whom have failed to get formal employment. His business, which rakes in between Sh2,000 and Sh5,000 a day, has enabled him to put food on the table for his family for years.

“I have laboured all my life to grow this business and my life and that of my family will be greatly affected. Where will the government take us, keeping in mind that at least 85 per cent of traders at Muthurwa depend on mitumba for their livelihood,” he says.

He also says a large section of the Kenyan populace that depends on these clothes will suffer a great deal.

“We have no power over the decisions the government feels befits its citizens. What we are asking is a fair market that will promote equal participation. The government should ensure that local companies produce affordable clothes so that Kenyans and traders can access them at a favourable price,” says Mungai.

The EAC Summit, the highest organ of the bloc, last year instructed its Council of Ministers, comprising ministers in charge of East African Affairs, to study ways of supporting the region’s textile and leather industries.

The ministers’ findings would guide the bloc in deciding its approach to the sector, which has been severely chocked by the importation of cheap second-hand clothes. Kenya alone imports around 100,000 metric tonnes of second-hand clothes, shoes and accessories a year from western countries.

The region’s heads of state agreed to adopt their ministers’ position for a ban on the importation of used clothes by imposing heavy levies.

Addressing the nation after this year’s Arusha summit, President Uhuru Kenyatta urged people in the second-hand clothes business to ease out of the trade to encourage growth of the local textiles and manufacturing sectors.

“Ultimately, it is key for the mitumba industry to slowly move into the new clothes market, supporting local production and local jobs. This is an important step towards promoting the ‘Buy Kenya, Build Kenya’ initiative,” he said.

The message aggrieved the traders, who felt the initiative would take away their jobs, prompting the President to host officials of the Association of Mitumba Importers in Kenya (AMIK) at State House so discuss the matter.

The East African Business Times (EABT) has learnt that the meeting eased tensions, with the President’s assurance that the government will provide alternatives for mitumba traders through adequate supply of quality locally manufactured clothing at competitive prices.

The EAC secretariat’s study on existing installed capacities in the region, both domestic and export manufacturers, pointed out that the region had the capacity to satisfy the market in a three-year phase-out plan.

“We are aware of the demands required to boost the sector and we are handling the issues cautiously but remarkably. The ministry will continue engaging the private sector and ensure that Kenya tops in ease of doing business so that local products are affordable,” he said.

According to Kenya’s Industrial Transformation programme, a publication by the Ministry of Industrialisation and Enterprise Development that showcases its projects and prospects, Kenya accounts for only 0.4 per cent of the US$84 billion American textiles market despite its advantage over other low-cost countries.

Further, statistics from the African Cotton & Textile Industries Federation show that the local textile industry peaked in 1984 with 52 mills producing more than 70,000 bales, and grinders alone employed more than 42,000 people.

Currently, the number of mills has dropped to 15, operating at a capacity of between 30 and 45 per cent.

The decline of Kenya’s textile industry dates back to early 1980s when liberalisation policies spearheaded by the World Bank opened up the local economy to second-hand clothes, and after the collapse of Kenya Cotton Board.

Due to their lower costs compared to locally produced outfits, imported second-hand clothes led to the gradual collapse of the then robust Kisumu Cotton Mills (KICOMI) and Rift Valley Textiles.

To speed up investment in the sector, the Ministry of Industrialisation is set to develop an integrated textile cluster in Naivasha in a bid to attract anchor investors. Leather clusters will be set up in Machakos and two other locations in the country.

Uganda had proposed a ban last year, even before the official pronouncement by the EAC, on the importation of second-hand garments, which account for 81 per cent of clothing purchased in the country.

Imports of second-had clothes are to be phased out by 2019.