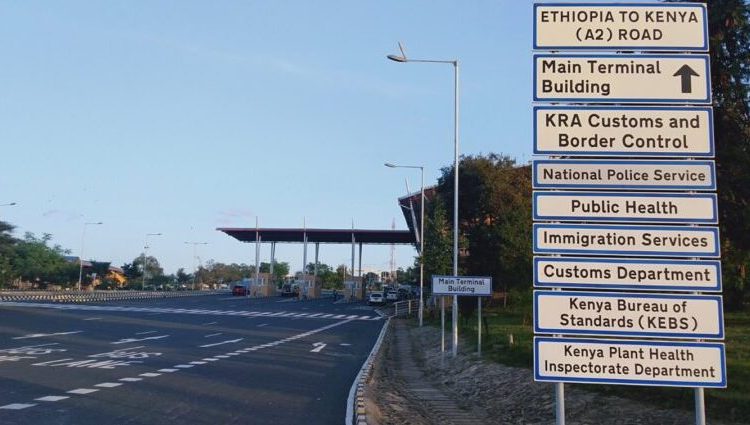 This means that, the border regulatory officials clearing traffic, cargo and persons from both Ethiopia and Kenya will now physically relocate and sit side by side on either side of the border, where they will undertake exit and entry formalities in a joint and/or sequenced manner. The officials conducted site visits and inspection of border facilities as part of the OSBP operations commencement process.

The move follows the official launch of Moyale OSBP in December 2020, by H.E. President Uhuru Kenyatta of Kenya and H.E. Prime Minister Abiy Ahmed of Ethiopia. This move is a step closer to achieving the goal of exponentially boosting trade between the two neighbouring nations, as well as promoting regional and economic integration between the East African and Horn of Africa regions. Moyale is the only gazetted border crossing point between Ethiopia and Kenya.

A fully functional OSBP is expected to reduce the border crossing time by at least 30 percent, to enable faster movement of cargo and people. A baseline survey by TradeMark East Africa (TMEA) in 2017 indicates that it takes on average, 21 hrs and 52 minutes (Kenya-Ethiopia) and 12.5 hrs (Ethiopia-Kenya) for a cargo truck to cross the border.

Speaking at the commencement meeting, Mr. Mengistu Tefera, Ethiopia’s head of delegation and Special Advisor to Commissioner General Ethiopia Customs Commission said, “The people of Ethiopia and Kenya deserve to tie their economic and social relations under the principle of mutual benefit. The establishment of the OSBP will have a significant role in improving cross border trade and free movement of people. My heartfelt compliments to all actors who successfully established this OSBP. And the government of Ethiopia and Kenya for the political commitment to realise the project.”

On his part, Mr. Kennedy Nyaiyo, Kenya’s head of delegation and the Secretary of Kenya’s Border Management Secretariat said, “Today, with the collaboration of both governments, development partners; the legal frameworks, construction, supplying office infrastructure and ICT technology and solar power of Moyale are fulfilled and ready for operation. Let us utilize the OSBP and explore its opportunities to facilitate trade between Ethiopia and Kenya.”

TMEA Ethiopia Deputy Country Director Mr. Abenet Bekele said, “The Moyale OSBP is an important milestone for Ethiopia in cementing its position as a key player in trade in the Horn and East African region and sets a positive precedent for other similar projects in the country’s key border points. The OSBP will improve efficiency by reducing time and transport costs for businessmen, traders, tourists, transporters, and communities while crossing from one partner state to another. ”

His counterpart, TMEA Kenya Programme Manager Mr. Daniel Muturi, congratulated the two Governments for the major achievement. He said “We have already seen momentum created by the Lamu Port South Sudan Ethiopian (LAPSSET) corridor with the launch of the first berth at the Lamu Port. The Moyale OSBP will be a key catalyst to enhance trade on the trans-African Highway to accelerate socio-economic transformation for both countries”

The project has been implemented by partners under the integrated border management component including the Ethiopia Customs Commission, Border Management Secretariat, and Kenya Revenue Authority, jointly with the other Government of Kenya and Government of Ethiopia border regulatory agencies, and TradeMark East Africa. Moyale OSBP development is complimented by the development of other infrastructure projects such as a bitumen standard 438 Kilometres road from Merille River to Moyale in Kenya and 300 Kilometres roads’ sections in Ethiopia, with support from Africa Development Bank (AfDB), European Union, Government of Kenya and the Government of Ethiopia.

The OSBP will enhance the free movement of people and goods between the two countries; and combined with other initiatives, is expected to contribute to boosting trade volumes.  Kenya’s exports to Ethiopia in 2019 were valued at USD 67 million, while Ethiopia’s exports to Kenya were valued at US$ 52.05 million and it is expected to increase significantly with the operationalisation.

An OSBP is a trade facilitation tool applied at land borders between two adjoining States. It refers to the simplified and harmonised legal and institutional framework, facilities, and associated coordinated procedures and processes. The OSBP enables goods, people, and vehicles crossing a border, to stop only once in the country of entry, in which they undergo necessary regulatory controls following applicable regional and national laws to exit the adjoining state and enter the host state.

It entails a “an inclusive and consultative whole Government” approach by creating an entire system, which enables business players to undergo border crossing exit and entry formalities only once in the country of entry. As a result, the clearance time at border crossing points is shortened. OSBPs promote a coordinated and integrated approach to facilitating trade, the movement of people, and improving security.