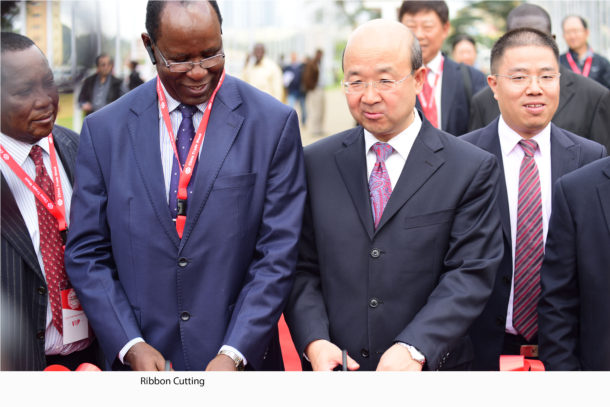 Speaking during the Expo, MIE Managing Director, Mr. David Wang  said, “Kenya is the most developed economy in Eastern Africa and also the economic, commercial, and logistical hub of the entire region. The China-Kenya economic cooperation and trade in various fields has gained momentum over the years, and it is the very reason why we are holding the China Trade Week in Nairobi for the second time.”

Mr Wang added that the event would provide an opportunity for Kenyan entrepreneurs to grow strong business partnerships with Chinese companies.

His sentiments were echoed by Chinese ambassador to Kenya Mr. Liu Xianfa, who during the launch said the frequent bilateral meetings that Kenya and China have had over the years has deepened trade ties between them.

“This exhibition launch has yet again brought us together,” said Mr Xianfa.

The Chinese trade Expo comes at a time when Kenya and China are strengthening their trade ties.

In the last decade, China has become Kenya’s largest source of Foreign Direct Investment (FDI) and second-largest trade partner. It is estimated that, in 2013, China’s cumulative direct investment in Kenya had reached US$474 million. During the same year, the bilateral trade volume between China and Kenya reached US$8.4 billion.

The event provided Chinese companies with an opportunity to meet, discuss, and develop trading and business partnerships with both Kenyan entrepreneurs and the region’s business community across various commercial sectors.

The Expo has been organized by MIE (MiddleEast International Events) Events, a leading organizer of trade fairs in Dubai and China, and is the only comprehensive China-focused trade event to be hosted in Kenya and the East African region.

Following the considerable success of the inaugural Angola Energy Month December 2020, the Angolan…

Dimension Data, has appointed Christopher Makyao as the Managing Director for its…

The Kenya Private Sector Alliance (KEPSA) has outlined 55 locations, where covid-19 vaccinations…
Prev Next 1 of 386
Social Media Auto Publish Powered By : XYZScripts.com
Sign in
Sign in