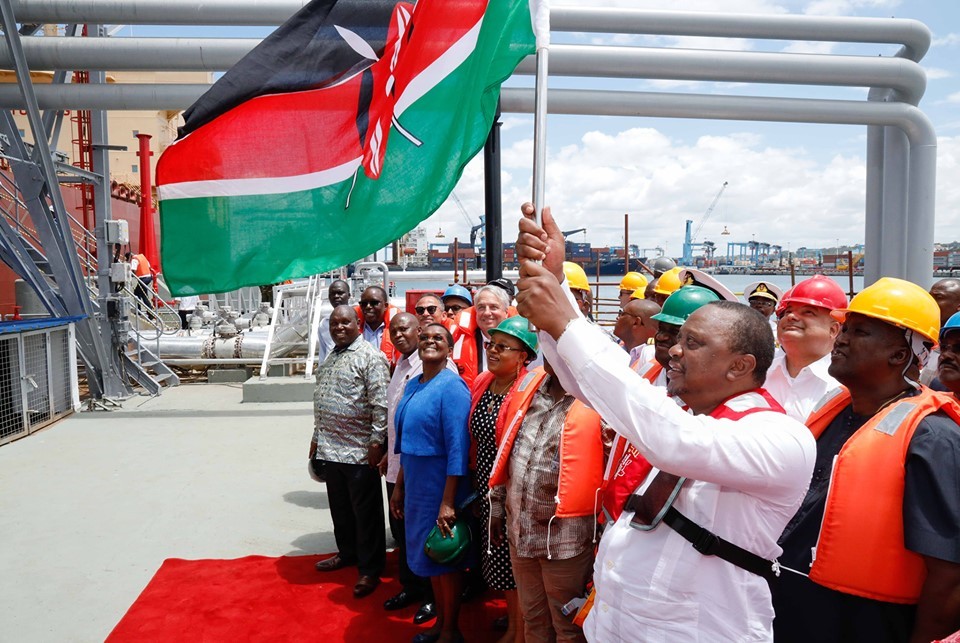 Kenya’s dream to join the league of petroleum exporting countries became a reality today as the first consignment of Kenyan crude oil left the Port of Mombasa on Monday.

The consignment of 200,000 barrels of low sulphur crude from Kenya’s oil fields in Turkana County, bought by United Kingdom based ChemChina, is worth Shs1.2 billion, a price much higher than what was initially projected.

Kenya is using this initial export to test the global market before it embarks on large scale commercial production of its oil.

The inaugural shipment of the crude oil makes Kenya the first Eastern Africa country to become an oil exporting nation.

The Celsius Riga, the ship carrying the Kenyan crude oil left the Mombasa Port for Malaysia shortly after midday, after it was flagged off by President Uhuru Kenyatta.

President Kenyatta said it was a milestone moment for Kenya as it becomes the first country in the region to become an oil exporter.

“I am proud to say Kenya’s grand march to oil and gas production and export has begun. The flagging-off of this maiden consignment represents a new dawn for Kenya; and the beginning of an era of greater prosperity for all Kenyans,” President Kenyatta said.

The President said the government is committed to achieve sustainable development through prudent use of the country’s resources.

“We will ensure that Kenya’s natural resources are utilized in a manner that yields maximum dividends today but without compromising the interests of future generations,” said the President.

The President said that the next phase following the success of the pilot project will include full field development that will be characterized by production and pipeline transportation of crude from Lokichar to the new Port of Lamu.

President Kenyatta said the oil project has already brought benefits for the people of Turkana County, with the local communities directly benefiting from employment opportunities in production and logistics, in addition to provision of ancillary and support services.

“As we proceed to full field development, we will ensure that local communities are major beneficiaries of these resources,” President Kenyatta assured.

He said the government has put in place measures to ensure that the fruits of prosperity are shared with devolved units in an equitable and sustainable manner.

“We have also committed, as a government, to upgrade the Leseru to Lokichar Road; and the modification works at Kenya Petroleum Refinery Limited, to support the Early Oil Pilot Scheme,” said the President at the ceremony held at the Kipevu Oil Terminal inside the Port of Mombasa.

At the same event, President Kenyatta congratulated 136 Kenyans who have gained employment as seafarers on several ships owned by the Mediterranean Shipping Company (MSC).

The 136 seafarers are part of a contingent of 275 Kenyans who have so far gained employment as part of ongoing government efforts to position the blue economy sector as a key economic driver.

The President revealed that the seafarers have got lucrative jobs and asked them to use their incomes wisely for the benefit of their families and their country.

“We can happily disclose that the lowest salary these seafarers will earn is a minimum of Kenya Shillings 85,000 per month,” said the President.

In addition, each seafarer will receive one return ticket for annual leave, meals and accommodation, health insurance as well as access to free world class in-house training to enable them to progress their careers.

“I also urge you to emulate the seafarers who have been recruited before you. Because of their exemplary performance, the Mediterranean Shipping Company has steadily increased the hiring of young Kenyans to work in their ships. Serve with professionalism, dignity and integrity and build Kenya’s reputation at sea,” the President told the newly recruited seafarers.

The seafarers were introduced by Chief of Defence Forces General Samson Mwathethe who heads a government taskforce on the blue economy.

Petroleum CS John Munyes said the Government plans to construct a pipeline between Turkana and Lamu to transport the crude oil.