Nelson Oyoo started Kenya’s first attack with an excellent turnover at the breakdown. Quick hands kept the ball moving at pace and a final overhead pass out to Willy Ambaka ensured that he had the time and space to surge over the line. Samuel Oliech added the conversion.

Fiji responded with a converted try of their own.

Eroni Sau’s offload off the deck was absolutely outstanding and it found Josua Vakurunabili who didn’t need to break his stride to score. Vatemo Ravouvou added the conversion to tie the match at 7-7.

Kenya knew that they had to be so clinical in this final and they were certainly doing that. Oliech produced a monster fend and touched down at pace. This time the conversion didn’t have the distance and Kenya had to settle for five points.

The last word of the half went to Fiji after a Kenyan error off the restart. Sevuloni Mocenacagi plucked the ball athletically out of the air, went through the gears and leveled the scores going into the break, all square at 12-12 with all to play for in the second half.

Fiji enjoyed a purple patch after the restart and took their output up a gear. Mocenacagi soon added his second, Amenoni Nasilasila and Alasio Naduva then provided electric impact off the bench before Naduva added their fourth try to go 26-12 up.

It was soon 31-12 to Fiji. They kicked for the corner off a penalty and went to the short side of a well-taken lineout. Paula Dranisinukula had his eyes firmly set on the line and Kenya’s final defenders just could not stop him.

The Kenyans were still fighting, staying hungry and tenacious despite the score. Ambaka flew down the left-wing and looked like he was to go over to give Kenya the last say on the scoreboard. However, the determination of Jerry Tuwai was shown in full force. Tuwai bundled his opponent into touch and after that his side controlled possession until the hooter sounded.

The full-time whistle signaled Fiji’s victory and as a result they became the first team to record two tournament titles this season. As for Kenya’s Shujaa, they live to fight another day, Innocent Simiyu must be proud of his charges performance and will certainly want more as the series heads into its final four rounds. He will also keep tabs on Commonwealth Games and Rugby World Cup Sevens as well, looking to best the beat out of Shujaa. 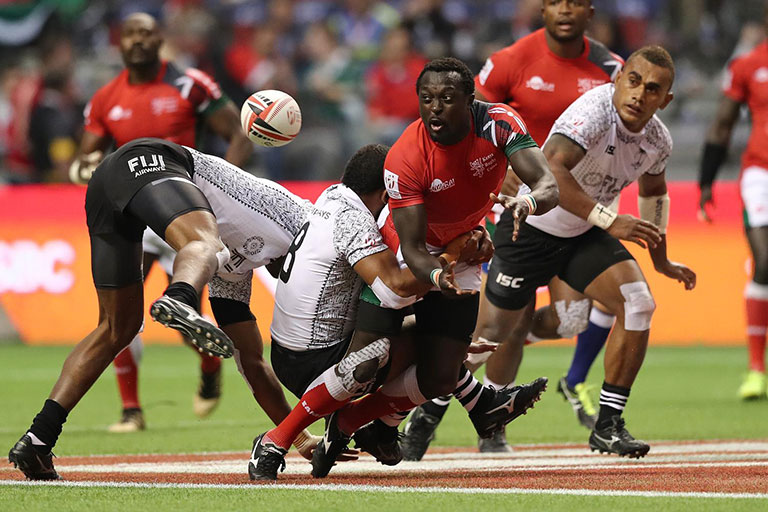 Collins Injera inspired Shujaa, the Kenya 7s rugby team, to a 24-19 win over the USA in a dramatic Canada Sevens semifinal, setting up a date against Fiji in the cup final.

It was the USA, winners at last weekend’s USA Sevens in Las Vegas who started well, going 14-0 up through Perry Baker’s two converted tries.

Nelson Oyoo scored the first of his two tries in emphatic fashion, receiving the ball and leaving USA battering ram Danny Barrett for dead to touch down. Sammy Oliech added the conversion to half the deficit.

Injera would read Folau Niua’s loose pass like a book, pouncing on it and racing clear before getting caught by Carlin Isles but he had the ability to fly the ball all the way out to Oyoo who went over for his brace, the 14-12 score seeing Shujaa trail the USA by two points at the break.

Isles restored the USA’s lead, scoring at the corner after the restart but pulled up with what looked like an uncomfortable hamstring.

Shujaa kept snapping at the USA, forcing them into errors. They would find themselves in possession, Collins Injera turning back the clock and creating a sumptuous try for Willy Ambaka, Eden Agero converting to tie up the score.

The USA gained the ball back from the restart and progressed up the field with purpose but the indefatigable Injera gained a monster turnover at the breakdown, popping the ball to Agero who offloaded to Oscar Ouma, nothing was going to stop Ouma from crossing the chalk and winning the game for Kenya, making their first cup final since that famous 30-7 win over Fiji at the 2016 Singapore Sevens.

Shujaa defeated defending champions England 12-0 to reach the cup semifinal at the Canada Sevens in Vancouver on Sunday night. This was Shujaa’s first win over England since 2011.

They took a 7-0 lead into the break after Oscar Ouma’s try on the verge of half time was converted by Sammy Oliech. Billy Odhiambo added a second try deep in the second half to claim the result and a semifinal date against the USA.

There was concern for Kenya in the opening minutes of this final Cup quarter-final as Collins Injera received treatment for an injury during kickoff. He was eventually back on his feet as he left the field, replaced by Eden Agero with many fearing that his tournament was over.

Moments later it looked for all the money in the world that Odhiambo was certain to go over for Kenya’s first score but Tom Mitchell’s desperate tackle halted him.

Kenya broke free on the stroke of half time with Ouma scoring under the posts, Sammy Oliech adding the conversion for a 7-0 lead, a great way for them to finish the half.

Phil Burgess’ outstanding tackle, over the line, prevented Oliech from scoring Kenya’s second but they soon did.

The run up to this try was characterized by Injera’s return to the field of play, after many thought his tournament was over. He took his position to strike off the five-metre scrum. They would swing it wide after gaining a further penalty, creating a four-on-two situation that set up Odhiambo for the try.

The team had earlier finished second in Pool C after posting two wins against France (14-7) and Spain (43-0) before losing 24-21 to Fiji.