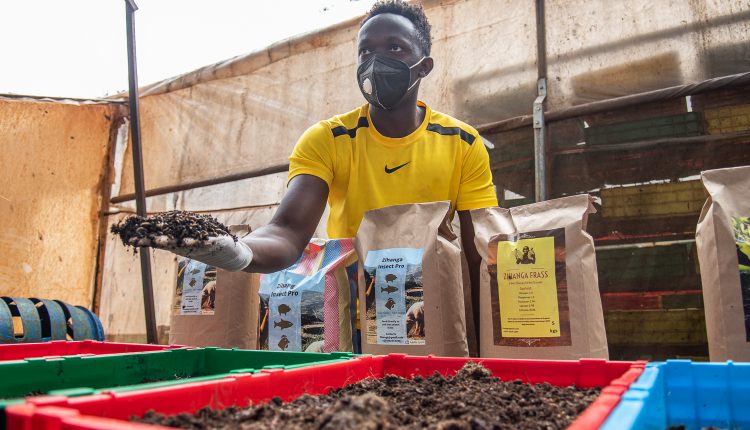 Livestock farmers in sub-Saharan Africa have grappled with an incessant price rise of animal feeds in recent years – caused by the scarcity and high cost of ingredients, namely, cereals, soybean, and fishmeal.

The incorporation of human foods, such as fish and meat, within conventional animal feeds, has put a strain on their availability. As a result, feeds constitute an estimated 70 per cent of input costs in poultry and fish production.

This, at a time when the Food and Agriculture Organization of the United Nations estimates that the world will have to produce 200 million tonnes more meat by 2050 to feed a projected global population of 9.1 billion. The need for alternative, cost-effective, and environmentally-friendly animal feed protein sources, is clear.

Aware of this fact, the Insect Feed for Poultry, Fish and Pig Production (INSFEED) project has been exploring the use of insects, such as black soldier flies (BSF) and crickets, within animal feeds. Comprising high levels of protein, fat, minerals, and amino acids, these insects offer a suitable, nutritious substitute to commercial feed protein sources. And there are more benefits: according to a study by the International Centre of Insect Physiology and Ecology (ICIPE), replacing five to 50 per cent of the fish meal and maize in conventional animal feeds with insects would avail enough protein to feed between 470,000 and 4.8 million people – in just one year.

The establishment of an insect-for-feed value chain would also create between 2,500 and 3,000 jobs annually, thus helping reduce poverty among some of the world’s poorest.

Since the project’s launch and first phase, which started in 2014, and second phase from 2017, the INSFEED project has promoted and increased the rearing, harvesting, processing and use of insects in fish and poultry feed among 57,000 farmers in Kenya and Uganda. Over 100 small- and medium-sized enterprises (SMEs) have also been engaged with the project. These SMEs now produce up to three tonnes of fresh BSF larvae per week, and over 1,200 jobs – particularly for women and youth – have been created through the establishment of these enterprises.

To streamline the value chain and further open up markets for the entrepreneurs, the project has developed feed standards for both countries. These guidelines have enhanced the production, processing, and handling of insects and their by-products, and have created an opportunity for mass insect production and marketing.

“These standards, the first to be developed in Africa, are a milestone in supporting farmers and industry players who are interested in farming insects. With this code of practice, insect farmers, harvesters, and processing industries can now get accreditation, and their products will be issued with a KEBS [Kenya Bureau of Food Standards] certificate enabling them to market and sell their products in local markets and beyond the country,” explains Peter Mutua, KEBS manager.

INSFEED is among eight other projects under the Cultivate Africa’s Future Fund, a joint initiative of the Australian Centre for International Agricultural Research, and Canada’s International Development Research Centre. Implemented by ICIPE, the insect initiative is being run in partnership with governments, the private sector and cooperatives.

The project has worked with women, women groups, and youth to grow their capacity to rear and process insects, and sell them for livestock feeds. Doreen Mbaya Ariwi, one such entrepreneur, now produces enough BSF to feed over 6,000 chickens (of different ages) on her poultry farm. With training in insect production and an initial BSF stock of 5 kg from ICIPE, Ariwi breeds the insects across 3,000 trays in three greenhouses (also provided by ICIPE). She also supplies a surplus of 220 kg BSF to a local company that manufactures insect-based pet food. For 1 kg of BSF, Ariwi charges Ksh320 (CA$3.56/AU$3.86), earning her an additional income stream.

Embracing BSF farming has also enabled Ariwi to reduce the amount of commercial feed she uses. Since May 2021, she has bought 300 bags per month instead of 450 bags, thanks to supplementation with insects, which she feeds to the chickens directly or mixes with conventional feeds. This has resulted in a saving of 30%.

“It would have been very difficult for us to keep the chickens we have without the support of the insects. The integrated farming method has been remarkable. The insects and chickens are interdependent. The BSF feed on chicken manure and, once the insects mature, we feed them to the chickens. There is zero waste, which is one of our missions at the farm. As we push for sustainable and greener communities, insects have assisted us in achieving that goal,” she says.

A group of 100 Kenyan youth, all in their early 20s, has also delved into insect rearing to meet the burgeoning demand for alternative protein sources from farmers and companies. On 0.1 acre of land provided by one of the youth’s parents, the group, called Y Minds Connect, are able to rear BSF larvae in 1,500 crates, with each crate accommodating 3 kg of larvae.

“We believe that one man’s waste is another man’s treasure, and that is why we have been keen to pursue insect farming. Working on a project at a low cost that helps the community and the environment is profitable, and is fulfilling. Feeds account for an estimated 70% of the cost of raising livestock, and we have been mesmerized by the potential of BSF to address this challenge,” enthuses 24-year-old Nicholas Mareve, CEO of Y Minds Connect.

Y Minds Connect produces 600 kg of BSF faeces (‘frass’) every week, which they sell as fertilizer to horticulture, flower, and organic farmers at Ksh100 (CA$1.15/AU$1.24) per 1 kg. The group earns additional income from the training it provides to women and youth groups in insect rearing and production. Depending on the number of attendees, these sessions range from Ksh2,000 (CA$22/AU$23) to Ksh5,000 (CA$56/AU$60) in cost.

“We train SMEs in how to handle each insect stage for better productivity, then give the enterprises their initial stock. Some have produced the insects for their own use, whilst others have partnered with companies to supply to them,” says Dr Chrysantus Tanga, INSFEED project leader and ICIPE research scientist. He adds that the insect rearing value chain has also created new enterprises, with youth and women making insect ‘nests’, in which the insects reproduce, as well as greenhouse structures to sell to farmers.

As more farmers learn how to rear insects for feed, and SMEs work directly with feed millers to supply them, an insect-rearing revolution is set to take off in sub-Saharan Africa. Other countries, including Rwanda, are now in the process of introducing standards to streamline insect rearing, and to help address the twin problems of feed shortages and price hikes.