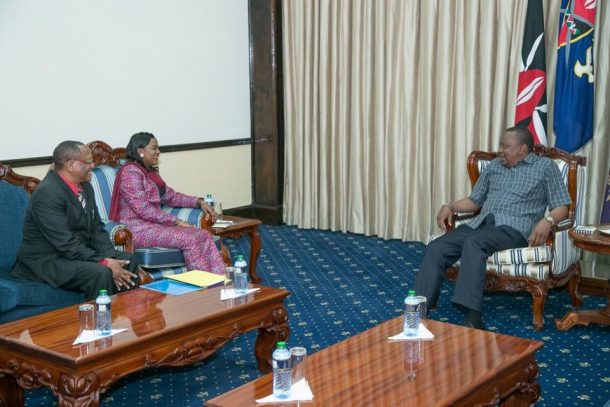 Speaking at State house in Nairobi when she held talks with President Uhuru Kenyatta, Pan African Youth Union President Ms. Francine Muyumba expressed confidence that involving President Kenyatta who is a pro youth President, in youth affairs at the forthcoming African Union Summit to be held in Addis Ababa, Ethiopia in January would lift the profile of the youth in the continent.

“We are seeking the President’s support in championing the youth agenda in Africa, considering his endearment to the young people and his passion to empower them,” said Muyumba.

The committee, which is expected to hold its first meeting during the 28th Summit of Heads of States and Government of the African Union, will carry out tangible actions for the youth in the continent.

The African Union’s theme for the year 2017 is ‘Harnessing the Demographic Dividend through Investments in the Youth’.

“We want to give hope and certainty to our youth. All our policies are geared towards the empowerment and economic development of our youth,” said Kenyatta.

Jumia to donate 1 per cent of every sale to charity