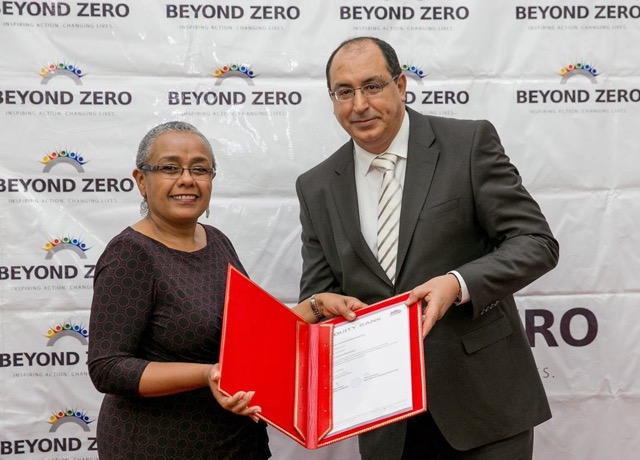 Morocco is a very important platform in international trade. Not only does it link Europe, Africa, the Maghreb and the Arab world, but it also connects Asia and North America.

Morocco’s role as a gateway to a rapidly growing Africa, the increasing presence of Moroccan companies in sub-Saharan markets, and the kingdom’s political and diplomatic focus on the continent, legitimises its leading role in promoting South-South Cooperation and intra-African investments.

East African Business Times Magazine’s Boniface Kanyamwaya recently caught up with H.E.Abdelilah BENRYANE, the Moroccan Ambassador to Kenya on the sidelines of celebrations to mark the arrival of  Royal Air Maroc in Nairobi at Jomo Kenyatta International Airport where he engaged him on a number of issues. Excerpts;

Q: How long do Kenya and Morocco’s diplomatic relations date back?

A: Morocco and Kenya’s diplomatic relations date back to 1965. Last year, the two countries celebrated the 50th anniversary of the establishment of diplomatic relations. The highlight of that celebration was a gala dinner hosted by the Embassy of Morocco in Nairobi to raise funds in support of First Lady Margaret Kenyatta’s Beyond Zero Campaign.

Q: What are some of the key areas of bilateral cooperation between Kenya and the Kingdom of Morocco?

A: Areas of bilateral cooperation includes education, transport, tourism and trade. The legal framework that governed bilateral relations from 1990 to 2002 covered areas such as technical and scientific cooperation and establishment of a joint bilateral commission. In 2007, several bilateral agreements were signed that covered sectors such as water management and sanitation, fisheries, protection and reciprocal promotion of investments, trade and industry, energy and mining, health, agricultural and agro-pastoral cooperation, youth and sports. The two countries have also officially signed an agreement on tourism (2009), air-transport (2011) and a memorandum of understanding between the Moroccan Centre for Export Promotion, Maroc Export, and the Kenya Chamber of Commerce and industry (2013). The remaining agreements are in the final stages of official endorsement.

Q: Kenyan students have been beneficiaries of scholarships to study in Morocco. How many are on scholarship in Morocco?

A: Since the 1990s, Morocco has granted on a yearly basis scholarships for Kenyan students and from other countries in the East African Community to pursue their studies in Moroccan universities and other academic institutions. Between 2006 and 2015, Morocco granted more than 600 scholarships to the East African region alone, making it one of the largest African student communities. The recent establishment of a direct air link between Casablanca and Nairobi opens new opportunities for Kenyan businessman and women to explore possibilities of doing business in Morocco. One major impact that such a development can achieve is to help promote tourism in Kenya and increase trade and connect the north and eastern regions of Africa. Morocco made the first step and it is now up to Kenya to follow suit.

Q: What’s the total volume of trade between the two countries?

Q: What characterized Morocco in 2015?

A: In Ernst &Young’s 2015 Africa Attractiveness Index, Morocco ranks third in terms of Foreign Direct Investment (FDI). In the first half of 2015, it attracted $1.32 billion in FDI, a 20 per cent year-on-year increase. It is mainly due to the country’s ability to demonstrate economic stability throughout the years, a relatively cheap and skilled labour, geographic location, access to numerous foreign markets thanks to various free trade agreements, as well as ease of market penetration of new investors.

A: Let me first of all underline that Morocco proposed since 2007 to grant the Sahara region a large autonomy status under Moroccan sovereignty. The international communities view this proposal as a serious and credible effort from the part of Morocco,that could lead to a realistic and lasting solution for this regional conflict. Morocco has started implementing its regionalisation policy that aims primarily at making of the Sahara a hub between the Maghreb and Sub-Saharan Africa. Indeed, the Sahara accounting for 59% of the Moroccan territory, the question of its development is at the forefront of the country’s internal policies. $1 billion where invested on the Sahara from 2004 to 2011 to successfully increase education, health and poverty reduction indicators above national average, the region having been left virtually devoid of infrastructures when it was freed by the Kingdom in 1975. Moreover, a “New Development Model for the Kingdom’s Southern Provinces” was introduced in 2013, aiming at reaching the regions potential and promoting growth, to then stimulate a knowledge based economy and introduce a high value adding sector. So far, $500 million were invested in the construction of 6 ports, and $300 million in expanding the road network from 70 to 4,000 km. The implementation of these strategies is set to culminate in a doubling of the region’s GDP in the next 10 years, the creation of 120,000 new jobs.

Q: What measures are you taking to strengthen trade integration among African countries?

A: We intend to share the same  values with our partner states by disseminating all over Africa the know-how and experience Morocco developed through legislative reforms, economic strategies and sector based plans launched as early as the year 2000 and which have all come to fruition at the targeted dates. The Report on Global Competitiveness released recently by the World Economic Forum confirmed Morocco as the most competitive economy in North Africa. Driven by a significant growth in non-agricultural sectors such as automotive, aeronautics and textiles, Morocco’s economic growth has seen a 5 per cent growth rate in 2015. The trade deficit decreased in the first half of 2015 to $7.8 billion from $10.2 billion in 2014. Exports increased by 6.4 per cent, totaling $11.22 billion. In 2014, the automotive sector surpassed phosphates for the first time as a major foreign exchange earner, thanks to investments in manufacturing and assembly by foreign companies such as Renault, Bombardier and Sumitomi Electric Wiring Systems.

Q:In what sectors of the economy are your investments concentrated?

A: Up till now, Morocco’s investments in Kenya have concerned mainly the banking and insurance sectors, BMCE Bank of Africa, one of Morocco’s leading banks, are the major shareholder of Bank of Africa in Kenya and in other countries of the East African Community. Saham Insurance Company has established itself recently in Nairobi and in Kigali. Several other Moroccan companies are also interested in Kenya and are mainly concerned with seafood and the agro-industry, construction, electricity and electronics; consulting and ITC; finance and services; metal and steel industry; para chemistry and plastics, pharmaceutical and textile.

Keeping your vehicle and building safe

Getting a loan is now as easy as ABC