‘My business had to do things right’

It was in 2007 and Eunice Mwendwa had just joined a driving school to take up driving lessons. Her hope was to learn all the basics of the road and be a qualified driver. But things soon took a wrong twist.

The instructor allocated to train her started asking for bribes as a condition to pass her through road tests. This, Mwendwa says, didn’t go well with her as she was aware of the challenges common with the Kenyan roads, and the need to embrace professionalism while driving. Thus she reported the matter to the instructor’s superiors.

“This was a very strange condition for me since this was not the appropriate way to qualify someone who’ll be driving on the road. I saw the need to embrace ethics and integrity in such an industry and promised to do something about it someday,” Mwendwa says.

Her best bet was to start a driving school that would do more than just pass students through the tests. However, she had only saved Sh100,000, partly from her salon and multi-level businesses at the time.

Determined to the course, Mwendwa approached a Nairobi-based Indian car dealer and selected a Toyota Starlet, which she’d pay in installments.

The car dealer, however, jokingly suggested that she pays half the amount for two such cars so she would have to pay the remaining in installments for both- Ksh23,000 and Ksh17,000 a month for the first and second car respectively.

It was a deal. And with the two vehicles, Mwendwa rented a small house in Dagoreti corner estate and started Style Up Driving School.

She reckons that when she was registering the business, many people poured cold water on the idea, with some terming it a male dominated venture that would prove difficult to manage.

“I met a man who told me ‘for a young lady like you, you won’t manage dealing with police officers, the many road cases and related challenges common in this field.’ But I was driven with passion and trust in God.”

She soldiered on, starting off the business as the only staff responsible for marketing, training new staff, managing accounts and every other aspects of the business.

Months later, she was approached by some lady who wanted to close down a family driving school business, with a deal to sell her a second-hand lorry at a subsidized fee (sh400,000). To raise the required cash, Mwendwa sold her salon and acquired both the lorry and its driver, adding on to her business’ list class BC&E package (for heavy duty vehicles). With the business boom, the entrepreneur was able to repay the car loan in 12 months.

She then embarked on looking for staff, and managed to convince some young man, a car wash employee, whom she trained to become the company manager.

“Being a qualified driving instructor, I personally trained all the drivers before admitting them to the driving school. They were not only to get the basics of driving, but also acquaint to proper student management,” she says.

“Further, I instructed all the employees to pay attention to customer service. And I believe this is the main reason we’ve grown our business.”

With the student numbers increasing, Mwendwa opened another branch in Kawangware (stage 1 and 2), then another at Ongata Rongai, Kajiado County, few months later. 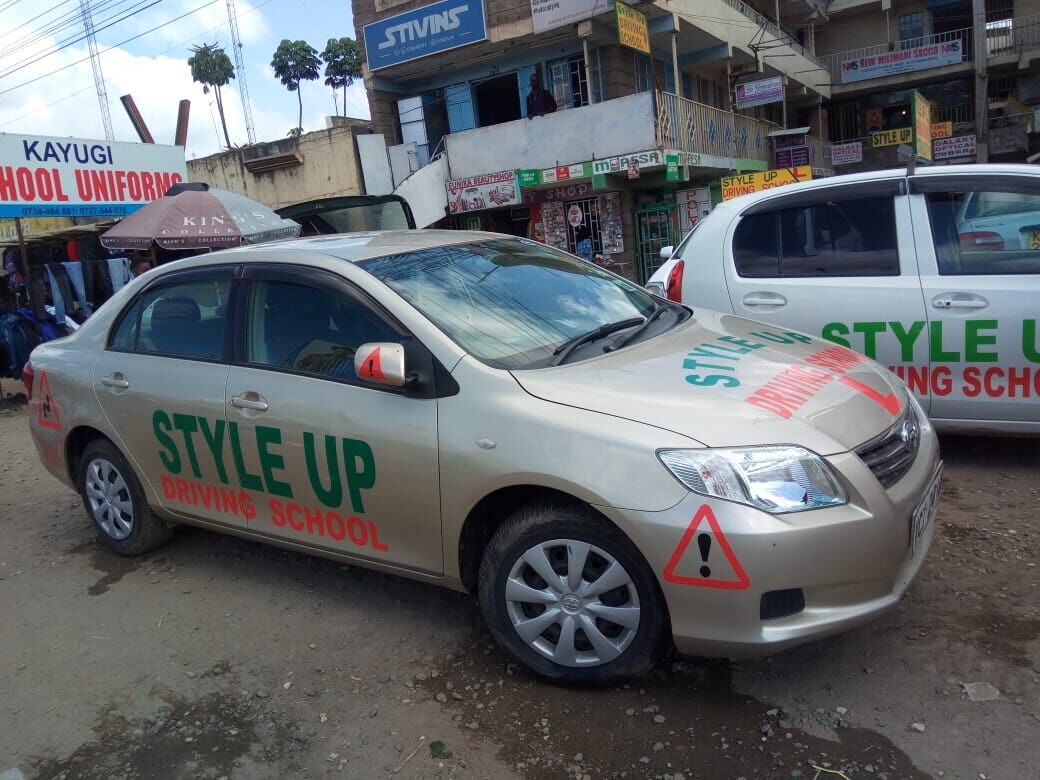 According to Mwendwa, the success gained in the two counties inspired her to open yet another branch in Meru, which has since gained traction in the region.

Her marketing strategy, she says, is based on good customer relations, subsidized fees and quality training. This has contributed to many referrals, mostly from former students and customers who’ve had good experience at the establishment.

According to a statement from the company, Style Up operates on special features ranging from; personalized attention, unlimited theory classes, expert and competent driving instructors, payment by installments and refresher for graduates at a discounted rate.

When a student pays fees for the packages in full, the statement adds, he/she gets one practical lesson and a basic mechanical lesson free.

Mwendwa says she has partnered with various county governments that sponsor a number of students in her schools to take up driving lessons. Among the counties are Nairobi, Kajiado and Meru. In Kajiado County for instance, 500 youths are sponsored, either by local Member of Parliament representatives or Member(s) of County Asssembly.

To give back to the community, the entrepreneur runs road safety campaigns for motorists, owing to the increasing number of accidents on the roads. She also gives motivation talks on business to budding entrepreneurs and counsels those that are distressed.

“Many people have knocked my door when they are distressed. And I give them the best prescriptions that have in the past been of help. This is where I draw my happiness, having to see people walk out of my door with solutions,” she says.

From a driving school that once operated only two cars, Style Up now runs a fleet of cars, trucks and motorbikes. More than 1000 students are trained in the schools each month. And there are plans to open other branches in other parts of the country.

While acknowledging the challenges that grapple many businesses, Mwendwa says for her, challenges create opportunities for growth and development.

She is currently constructing a facility in Rongai that will offer technical courses to the growing number of youths in the region.

“This facility will help bridge gaps in the industry by developing technically experienced youths. We intend to offer quality courses and thereby tackle the rising youth unemployment in the country by developing hands-on skills,” she concludes.