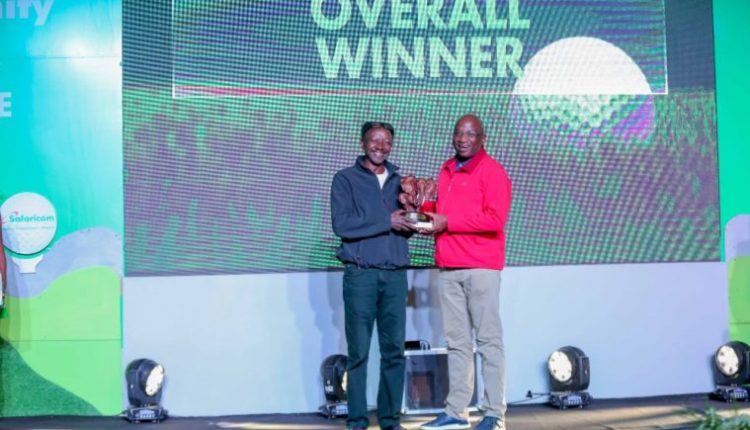 Nelson Nyoike emerged as the winner of the 13th leg of the Safaricom Golf Tour held at the par 72 Vet Lab Golf Club beating the other 253 golfers in the competition.

Playing off handicap 21,sixty-two-year-oldr old golfer capitalized on the home advantage and his excellent form to post 22 points in the front nine before doubling the scores in the back nine to post a total of 44 points courtesy of twelve pars, four double bogeys and two bogeys enabling him to claim the overall title ahead of Watson Burugu with 40 points.

Nyoike becomes the second eldest golfer to win the Safaricom Golf Tour after the seventy-year-old Don Riaro of Karen Golf Club. He joins other winners from the past twelve tournaments to battle it out in the grand finale to be held in two weeks at Vipingo Ridge in Kilifi County.

” I played easy to win the tournament courtesy of several pars. The course was in perfect condition, and I had good company with my four-ball team players, who also played a bigger role in today’s victory. It is my first win of the series, and I feel great about it as it has given me a rare opportunity to represent my home club in the finals. I know it will be tough competing against the best golfers from other golf clubs across the country, but I will try my best and make sure I bring the victory home,” said. Nyoike

Playing off handicap 27, Jane Wakobi claimed the Ladies’ top prize with 37 points after beating her club-mate Rose Mwarania, who had carded 37 Stableford points.

Beatrice Kamau and Calden Smith emerged the winners in the longest drive contest, with Joe Kimani settling for the Nearest to the pin award. Gulraj Sehmi and Philip Wahome won the best front and back nine awards, respectively.

In the Staff category, playing off handicap 25, Erick Mugo capitalized on his best form to lead the category on 37 points beating the multiple-time winner Martin Mabuya.

The 14th leg which also marks the last tournament of the series ahead of the grand finale in Vipingo is scheduled for 30th July at Nairobi Royal Golf Club.

The tour has so far attracted over 7,000 golfers who have taken part in the various tournaments, junior clinics and outreach programs.

Fuzu: What we’ve learned from working with employers to hire persons with disabilities