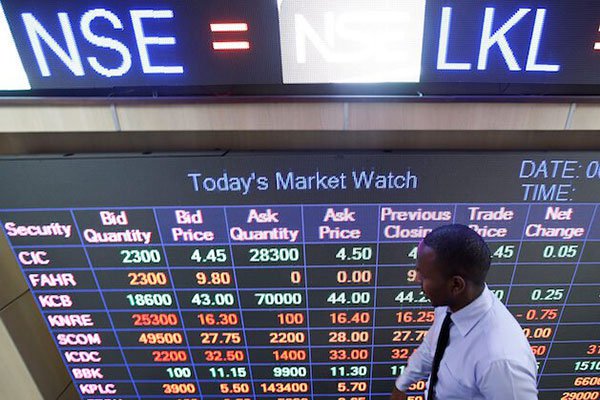 The decline in trading at the Nairobi bourse has hurt earnings of the Nairobi Securities Exchange (NSE), which plunged 82 percent from Ksh133 million ($1.3 million) as at June 2018 to Ksh24 million ($240,000) in the first half of this year.

The NSE says that bond turnover in the first six months was only Ksh78 billion ($780 million) compared to Ksh108 billion ($1.08 billion) reported in the same period last year, limiting the firm’s ability to collect fees from transactions.

“The decline in the equity turnover was a result of low domestic demand which saw an increase in asset allocation towards the fixed income assets,” NSE chief executive Geoffrey Odundo said Wednesday.

As the revenues declined, NSE was faced with higher costs as a result of restructuring pushing administrative costs from Ksh277 million ($2.7 million) to Ksh339 million ($3.3 million).

“NSE reviewed its administrative costs leading to a one off staff restructuring cost of Ksh52 million (502,000). This is not expected to recur in the second half of 2019,” Mr Odundo said.

The bourse hopes for a saving grace in the derivatives market launched in July as well as return of foreign investors who may feel that a reduction of interest rates in the US Federal Reserve makes frontier markets such as Kenya worth the risk.

The NSE said it will increase interaction with investors in the second half as it tries to attract players to the Nairobi bourse.

The bourse will also leverage the 16 companies that have joined its Ibuka programme with a hope of making new listings.

The NSE recently lost KenolKobil which was bought by French firm Rubis Energies and has delisted while National Bank of Kenya is in the process of being acquired by KCB.

Express Kenya has also made attempts to leave the bourse.

Mr Odundo said the bourse will also try and help companies access money through the corporate bond market that has been dormant for 27 months since EABL issued a debt security in April 2017.