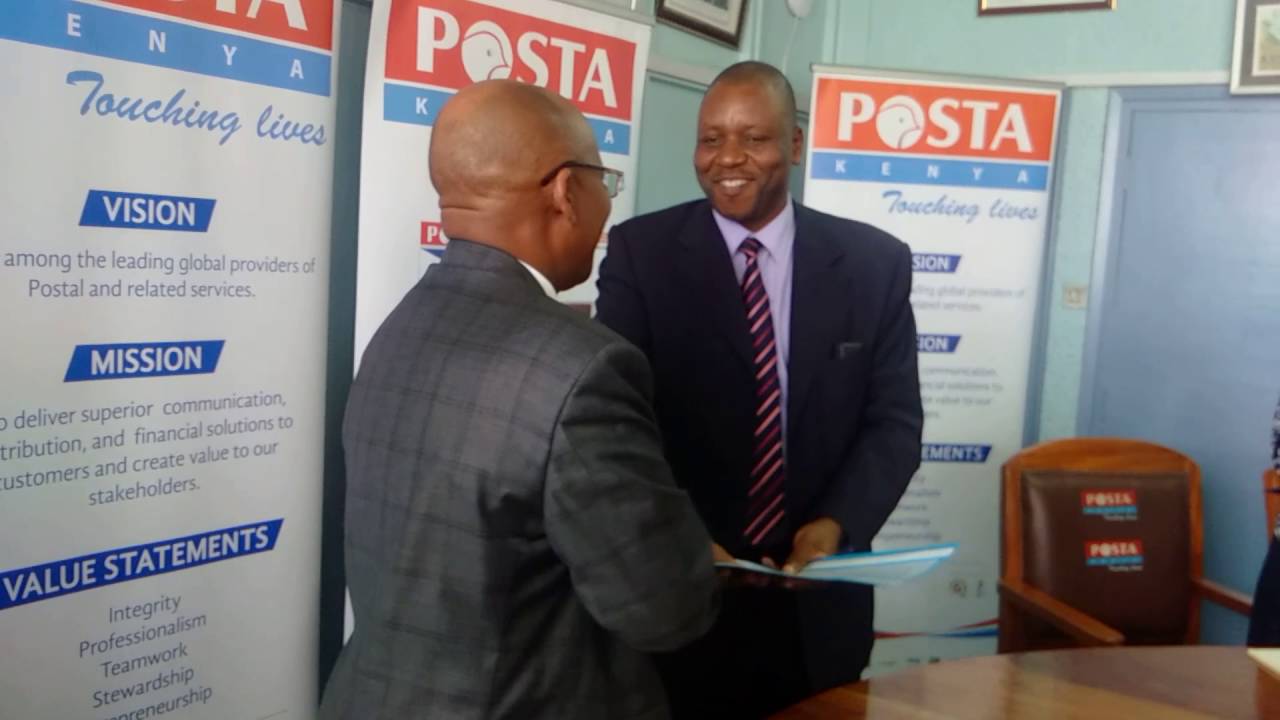 On 21 July 2016, Daniel Kagwe was appointed the Postmaster General and Acting Chief Executive Officer (CEO) of Postal Corporation of Kenya (PCK) following the exit of Dr Enock Kinara. The task ahead is tough, but the corporation’s board has confidence that Kagwe is just the right man for the job.

The 54 year old CEO holds a Bachelor of Arts degree in Economics and Business Administration and has a diploma in Marketing.  He is also an associate member of Kenya Institute of Management and Marketing Society of Kenya.

He brings with him over 30 years of experience in the private and public sectors, where he mostly held senior management positions. He has worked in, among others, courier, financial, and logistics industry both locally and abroad.

He joined PCK in March 2013 as the Director of Strategy and Business Development. His appointment to the top office comes at a time when the State Corporation is gearing up for major transformation as it strives to restore its vibrancy and meet the universal service obligation.

On his desk is a three-year development blueprint that will serve as Posta’s roadmap to a world-class postal and financial service delivery and profitability.

“We believe the 2016-2019 strategic plan is going to completely revolutionise the postal and courier industry in Kenya,” he says.

He strongly believes that innovation and technology will drive Posta’s transformation moving forward.

“The postal industry today must ride on the vast opportunity presented by technology to reap the immense benefits associated with it,” says Kagwe.

Posta’s mandate is to provide and operate postal and financial services and perform any other functions or duties as the Cabinet Secretary in charge of Postal services may assign from time to time. Mail, courier and payment services constitute the Corporation’s core business.

As the public postal licensee, it has the monopoly to offer post office letter boxes services, issue postage stamps and conveyance of letters up to below 350 Grammes.

PCK is currently among the 192 Universal Postal Union (UPU) member countries with a UPU Level A certification. This signifies attainment of UPU standards in the Quality Management Systems.

“We received official certificate during the UPU Congress held in Instanbul, Turkey, from 19th September to 7th October 2016,” says the new Postmaster General.

PCK has been ISO certified since December 2010 and was recertified in July 2014 for a period of three years.

As of today, Posta operates a network comprising 623 Post Offices spread across the eight for provinces, that is, Nairobi, Western, Nyanza, Central, Coast, Eastern, Rift Valley and Northern region.

“Our overall goal is to improve penetration levels by expanding the network to meet our universal service obligation, which requires that 1 (one) post office serves 6000 people,” says Kagwe.

The Government through the then Ministry of Devolution (now Ministry of Public Service) earmarked Posta Kenya as the one stop shop in promoting the cashless economy through its PostaPesa platform for all its services.

For instance, Huduma Centres are currently operational in 40 major Post Offices with an anticipated rollout to all the 47 counties by the end of 2016.

“This is a revolutionary technological system to automate end-to-end business processes (from front to back office) in all postal outlets,” says Kagwe, adding that development of the automated system will cost an estimated US$ 3 million.

The project’s implementation commenced on 1st April 2014 and is expected to be fully operational in 475 offices by end of April 2017.

“The ERP project will completely automate and transform Posta Kenya to a paperless and an efficient Business Enterprise going forward,” says the new Postmaster General.

System automation aside, Posta Kenya, in 2013, acquired a state-of-the-art financial switch at a cost of US$1 million. The e-payment system has enabled the Corporation to transact the following operations electronically.

PCK now facilitates banking services as an agent of six banks where customers can check balances, withdraw or deposit their money at various outlets. These are The Kenya Commercial Bank, Cooperative Bank, National Bank of Kenya, Credit Bank, Barclays Bank of Kenya, Diamond Trust Bank which will be launched mid-September 2016.

The Corporation’s goal is to become the leading global provider of innovative communication, distribution and financial solutions and related services to customers while also creating value to its stakeholders.