The two received an elaborate State Reception ceremony that included a Guard of Honor mounted by a detachment of the Kenya Air Force and a 21-Gun Salute. 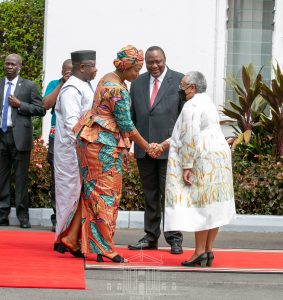 President Julius Maada Bio is in the country on a State Visit during which he will be the Chief Guest at this year’s Madaraka Day national celebrations at Uhuru Gardens.

The celebrations will be marked on May 1st when thousands of Kenyans, leaders, and other guests will gather at the newly renovated Uhuru Gardens in Nairobi.