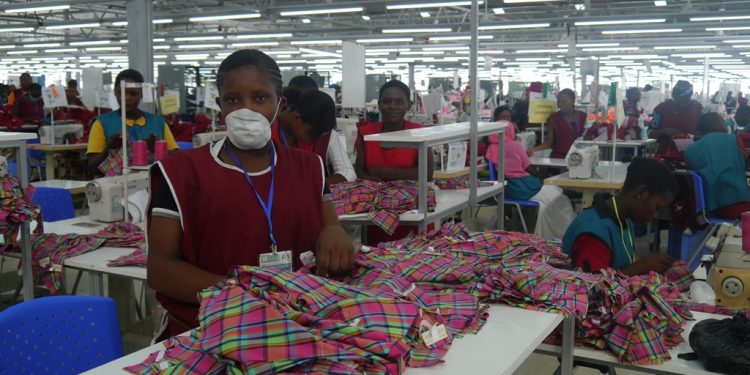 By Caroline Theuri and Ben Oduor

The Kenyan government has lately been trying to revive the local textile and apparel manufacturing industry. In the 2019/20 budget, the government stated that it is making an effort to revive the Rift Valley Textile factory (Rivatex) in Eldoret, which is owned by Moi University, in an attempt to promote locally made clothing.

It is expected that by opening the factory, there will be over 2000 jobs created. Another expectation is that it will enable cotton farmers to sell their produce to the factory as raw material required to make new clothes and boost local daily production.

Apart from cotton farmers, reviving the local textile and apparel industry will give other sector players such as financial institutions an opportunity to offer their credit facilities.

Part of the revival is the attempt by government to implement its Big Four agenda under the manufacturing sector. This is a policy initiative that was started two years ago so as to make the local textile and apparel industry competitive to both the local and international markets within the next three years.

There have been previous attempts by government and development partners to revive this sector. The African Growth and Opportunity Act (Agoa) is a case in point.

The Act was created 19 years ago between governments of the United States of America (USA) and some African countries, including Kenya. Through it, these African countries are able to export their textile and apparel products to the USA without any duty imposed on them.

According to the 2018 Agoa strategy, textile and apparel were some of the products to be exported from Kenya to the United States- Kenya being one of the more than 100 countries under the treaty. As of 2016, garments made from cotton in Kenya exported to the United States earned the country Kshs162 million.

But the success of Agoa in the country has not been too smooth. Globally, the United States, despite its economic muscle, still faces the threat from Asia, where farmers sought to price their products at a lower price, though Africa has been able to cap it.

The Kenyan government protects local industries by creating Export Processing Zones (EPZs), which are special areas or companies where local textiles could be manufactured. Apparel is now produced in major towns in the country.

Since its inception almost two decades ago, AGOA has been successful. The 2019 Economic Survey reveals that from this deal, Kenya exported locally manufactured apparel that were worth Kshs41.6 billion in 2018, Kshs8.5 billion more than the previous year.

But what about local companies that are not protected by the EPZs? While they grapple with such challenges as high costs of electricity, poor road networks and high costs of transporting their textile and apparel products, they have also grappled with increased importation of second hand clothing.

As of last year, the second hand apparel market earned Kenya over Kshs12 billion. There were 177,160 tonnes of second hand clothes imported in 2018, 41,292 more than were bought the previous year, according to data from the 2019 Economic Survey.

Locally, open-air markets such as Gikomba and Muthurwa are known for selling imported clothing, common known as Mitumba. Alex Mutiso, a trader of second-hand T-Shirts at Muthurwa market says he buys the clothes at Gikomba market at Kshs200 each and resells them at Kshs350.

“If I were to buy them at a shop selling new clothes, say at Eastleigh, the selling price would have been Kshs1000, (which is quite expensive for buyers).” he says.

Another trader, John Mubura, who sells leather jackets at the market, says his customers prefer to buy from him because of the (relatively low) price and durability that his second hand clothes offer. The leather jackets are imported from abroad.

“But even then, buying the jackets is expensive because of high taxation rates being levied on second hand clothes while still in containers at the Port of Mombasa. Taxation has meant that the high cost is passed on to the consumer,” he says.

Industry players will recall how the local apparel and textile industry succumbed to the effects of increased importation of second hand clothing in the mid-to-late 1980’s.

Cotton farming then took a hit with low yields. Banks fell short of providing credit facilities to farmers. Industry regulator, Cotton Board of Kenya, succumbed to pressure and closed down. And key companies such as the Kisumu Cotton Mills (KICOMI) went moribund.

According to statistics from the African Cotton and Textile Industries Federation, local textile industry peaked in 1984, with 52 mills producing more than 70,000 bales; and grinders alone employed more than 42,000 people.

Currently, the number of mills has dropped to 15, operating at a capacity of between 30 and 45 percent. The decline of Kenya’s textile industry dates back to early 1980s when liberalisation policies spearheaded by the World Bank opened up the local economy to second-hand clothes. And due to their lower costs compared to locally produced outfits, imported clothes led to the gradual collapse of former robust companies and a decline to the sector.

To speed up investment in the sector, the Ministry of Industrialisation has developed an integrated textile cluster in Naivasha in a bid to attract anchor investors. Leather clusters will be set up in Machakos and two other locations in the country.

Further, to promote locally produced outfits, the EAC Summit, the highest organ of the regional bloc, in 2015 instructed its Council of Ministers, comprising ministers of East African Affairs to study ways of supporting the region’s textile and leather industries.

The Ministers’ findings would guide the bloc in deciding its approach to the sector, which has been severely chocked by the importation of cheap second-hand clothes. Kenya alone imports around 100,000 metric tonnes of second hand clothes, shoes and accessories a year from the Western countries.

The region’s heads of state agreed to adopt their ministers’ position for a ban on the importation of used clothes by imposing heavy levies. President Uhuru Kenyatta would the following year give a state of the nation address, urging people in the second hand business to ease out of the trade to encourage growth of the local textiles and manufacturing sectors.

“Ultimately, it is key for the mitumba industry to slowly move into the new clothes market, supporting local production and local jobs. This is an important step towards promoting the ‘Buy Kenya, Build kenya’ initiative,” he said.

However, the message aggrieved the traders, who felt then that the initiative would take away their jobs, prompting the president to host officials of the Association of Mitumba Importers in Kenya (AMIK) at State House to discuss the matter.

The meeting eased tensions, with the president promising that government would provide alternatives for mitumba traders through adequate supply of quality locally produced clothing at competitive prices.