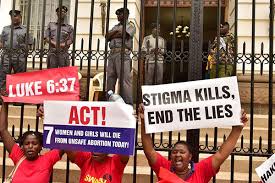 Civil Rights groups in Nairobi on Wednesday petitioned Governor Mike Sonko against what they said were misleading anti-abortion billboards that are erected in different parts of Nairobi.

The 12 Civil Rights Groups asked the governor to pull the billboards down as they were not only causing stigma to women seeking comprehensive reproductive healthcare services but also against Article 43(1)(a) of the constitution.

“We are specifically concerned about irresponsible billboards with misleading information on abortion that recently were posted in Nairobi. The messages on the billboards will fuel the stigma that surrounds abortion,” read the petition.

“The messaging in these billboards coupled with the misguided actions taken to ban the provision of abortion services by the Marie Stopes Kenya make it necessary for us to intervene,” it further read.

According to the civil rights groups, abortion is a reproductive health service that women and girls may require at some point in their lives and that they had the right to information and the right to access those services.

The Civil Rights groups said that the billboards had a misleading message that would fuel abortion stigma “which is a negative attribute ascribed to women who seek to end a pregnancy.”

The groups said that the constitution recognizes that there are circumstances that may lead one to have an abortion which include; “when they have suffered a miscarriage, when they have an ectopic pregnancy, when the fetus cannot survive outside the mother’s womb and when they suffer sexual violence.”

“If we allow fundamentalists to message abortion as murder, women and girls in the foregoing circumstances may not come out to seek this necessary health service exposing them to the risk of losing their lives,” read the petition.