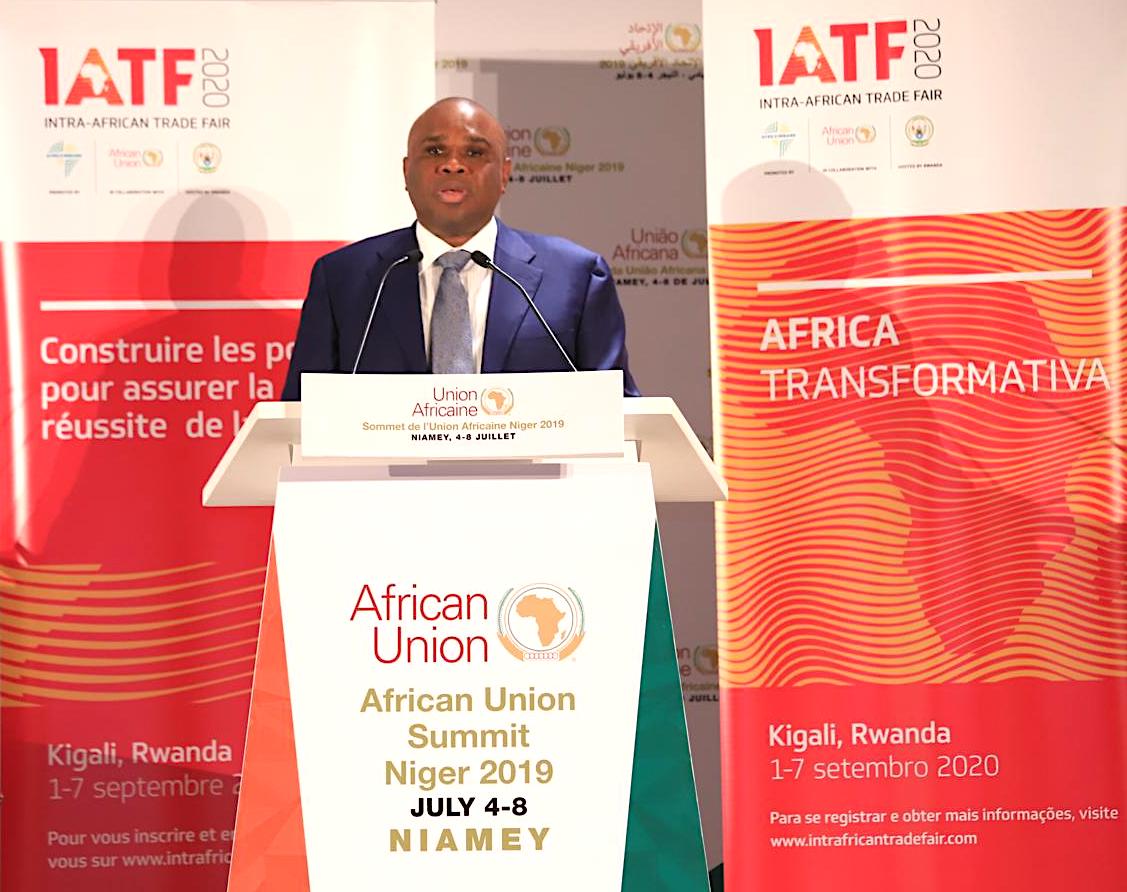 The organisers of the Second Intra-African Trade Fair (IATF2020) expect it to surpass the achievements of the inaugural trade fair held in Cairo in 2018 by attracting 10,000 participants and generating intra-African trade and investment deals worth more than $40 billion, Prof. Benedict Oramah, President of the African Export-Import Bank (Afreximbank), has said.

Prof. Oramah was speaking at the formal launch of IATF2020 during the African Continental Free Trade Area (AfCFTA) Business Forum 2019 held on the sidelines of the 12th Extraordinary Summit of African Union (AU) Heads of State in Niamey. He told guests that the trade fair, scheduled for Kigali from 1 to 7 September 2020, would attract more than 1,100 exhibitors from over 55 countries.

“Working with our esteemed partners, we will exceed the achievements of 2018,” he said, describing IATF2018 as a resounding success, not in the colorful displays exhibited, but in the showcasing of diversity of tradable goods by about 1,100 exhibitors from 45 countries and in the execution of deals worth about $32 billion.

That trade fair resulted in a Nigerian technology company winning a $100-million contract to provide technology-based solutions to the South Sudanese government and an Egyptian company winning contracts in many African countries to supply and install energy generation and distribution equipment worth close to $1 billion.

It also created opportunities for other  Egyptian and Tunisian companies signing a $50-million partnership deal to create a joint venture for assembling home appliances and the signing of a $3-billion energy generation project between an Egyptian company and an African government, the largest-ever intra-African project executed exclusively by African entities, including financial institutions.

“The momentum created by the maiden IATF and the historic launch of the African Continental Free Trade Area (AfCFTA) will sustain the growth of cross-border trade and investments,” he affirmed.

Amb. Albert Muchanga, the AU Commissioner for Trade and Industry, said that the IATF was one of a set of activities planned by the African Union Commission to support the implementation of the AfCFTA. The others included the African Trade Observatory, a portal for real-time information on business opportunities.

Soraya Hakuziyaremye, Minister of Trade and Industry of Rwanda, said that it was important for the African private sector to take advantage of IATF2020 to present and exchange their products and for entrepreneurs to use it to boost their visibility.