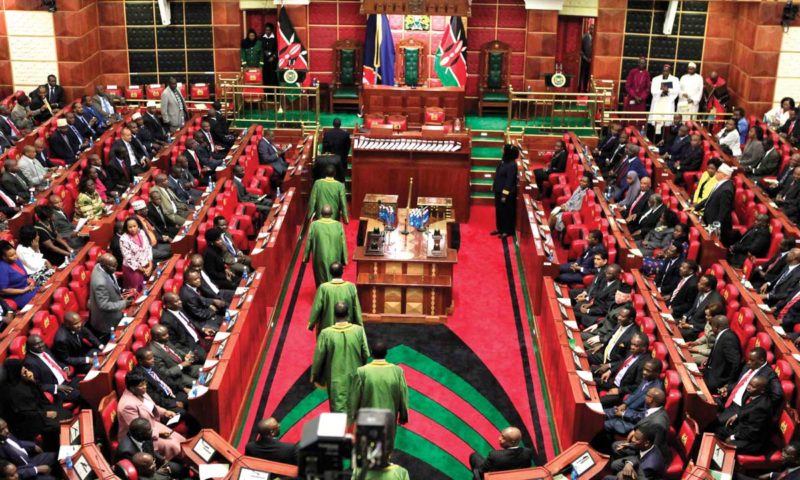 MPs, this morning expected held a joint Speaker’s Kamukunji (informal meeting) to take a position in a case challenging the Sh250,000 house allowance.

The meeting comes amid a mounting tussle between Parliament, the Salaries and Remuneration Commission (SRC) and activist Okiya Omtatah after the lawmakers pocketed Sh2.25 million in house allowances backdated to October last year.

The Speaker’s Kamukunji will be co-chaired by National Assembly Speaker Justin Muturi and his Senate counterpart Ken Lusaka.

On Tuesday, Muturi (pictured) invited members of the National Assembly to the informal sitting that will also include Senators to “take a collective decision on the way forward.”

“You are invited for the Speaker’s Kamukunji on Thursday June 6, in the National Assembly Chambers at 11 am,” Muturi said in his communication to the House.

“ The meeting is intended to find an opportunity to brief members and staff of the ongoing dispute between the SRC and the Parliamentary Service Commission (PSC). This Kamukunji will also involve senators,” he said amid applause from the lawmakers.

According to Muturi, the Kamukunji was necessitated by a letter  written by Homa Bay Town MP Peter Kaluma requesting that a meeting be held over the issue. “Hon Kaluma has raised pertinent issues in the letter to the Speaker,” he noted.

In the letter, Kaluma wants among other things legislators removed as parties in the suit to have their interests advocated for by the Parliamentary Service Commission (PSC) as a constitutional body.  Kaluma wants the Attorney General dropped from the case so that the matter is between SRC and PSC.

Last month, the 416 members of the two Houses were paid a Sh250,000 house allowance that was backdated to October 5, 2018, the day High Court Judge Chacha Mwita ruled that deputy governors and other State officers are entitled to a house or a house allowance.

Article 260 of the the constitution lists the MPs as State officers alongside the President, his deputy, Cabinet secretaries, judges, principal secretaries and members of constitutional commissions and independent offices.