Student project sees birth of a ‘Made in Uganda’ vehicle 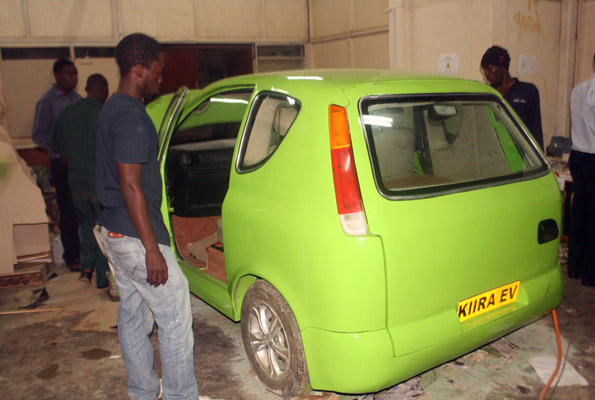 In 2006, students from 25 universities and colleges across the world took part in a project aimed at designing plug-in electric hybrid vehicles.

At the end of the three-year design project, they had produced four hybrid cars run by solar, bio-fuels and human power.

Among those who took part in the exercise, which was headed by the highly rated US-based Massachusetts Institute of Technology (MIT), were students from Makerere University’s School of Engineering.

Buoyed by the experience they gained, they embarked on a project of their own to develop a “Made in Uganda” hybrid car at a cost of U$70 million sponsored by the government.

In 2011, they unveiled the first car, the Kiira EV Proof of Concept. Although the Kiira EV had some weakness, it became a foundation to build on.

In 2012, Uganda’s Ministry of Trade Industry and Cooperatives took up the Kiira electric vehicle project and improved on the Kiira EV model. The government then set up Kiira Motors Corporation (KMC) which plans to actualise commercial production of the cars. It is headed by Paul Musasizi, who is the project manager.

The Kiira EV Smack is a five-seater concept car that runs on a 1.8 cc ecotech hybrid petrol engine and a high voltage battery.

He says when the car is starting, it does not require a key as it has a push-to-start button.

It also has a portable key in the form of a card and when you are a few feet from the car, it senses the key and either locks or opens the doors.

The car was designed with a Bluetooth system that allows a driver to connect to their phone or music handset.

Its rims and the steering wheel are also customised with the image of the Crested Crane.

Some of the Kiira EV Smack parts such as seats and body were designed locally as were the engine, dual cooling system that runs on both water and oil were also done locally.

However, Musasizi says the dual radiator that uses both oil and water was designed by the Kiira team but made by an international contractor in the US.

What makes the car unique is the fact that its fuel tank has a capacity of 60 litres and it also comes with an electro dynamic system controller. It also has sensors that help the driver while reversing and when he or she is too close to an obstacle, the alarm makes a loud sound.

Musasizi says the government, through the Uganda Investment Authority, has given them 100 acres of land at the Kampala Industrial and Business Park in Jinja for a manufacturing plant.

He says the plant will have an assembly plant, administrative blocks, an infirmary, an innovative technology centre, among others, with construction expected to start in June.

The plant is expected to produce 840 vehicles per month and create 500 jobs for engineers at the plant and thousands of others outside.

However, irrespective of these prospects, Musasizi acknowledges that there are capacity and infrastructural challenges to deal with, saying training will address the former while the various energy projects in the pipeline, complemented by preferential energy tariffs for KMC, should address the latter.

There are also market and industry dynamics to contend with. The Kiira EV project targets its first production as a D-segment vehicle, a sedan built for high ranking government officials and corporate East Africa’s upper crust whose employers buy them brand new cars and can afford the US$20,000 price tag.