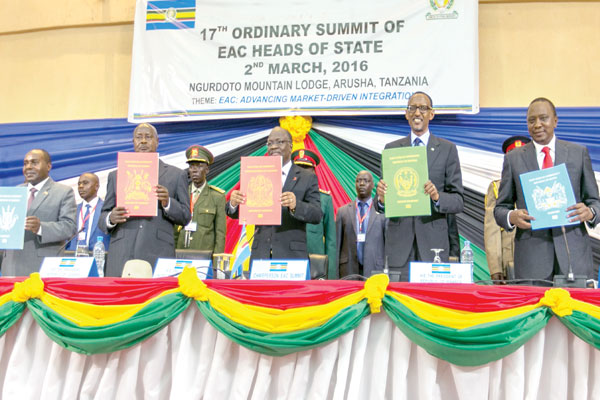 Fear of loss of sovereignty by some member states slows progress

The East African Community (EAC) was established with a vision to set up a prosperous, competitive, secure, stable and politically united region and provide a platform to widen and deepen economic, political, social and cultural integration to improve the quality of life of citizens through increased competitiveness, value added production, trade and investments.

According to the treaty that  established the EAC; the partner states undertake to establish among themselves and in accordance with the provisions of the treaty, a customs union, a common market, subsequently a monetary union and ultimately a political federation in order to strengthen and regulate the industrial, commercial, infrastructural, cultural, social, political and other relations of the partner states to the end that there shall be accelerated, harmonious and balanced development and sustained expansion of economic activities- the benefits of which shall equally be shared among member states.

Together, the geographical area of the six EAC countries is 2.47 square kilometres and hosts a population of more than 145 million people who share history, language, culture and currently infrastructure among other resources.

The combined Gross Domestic Product (GDP) of the six countries is US$89.21 billion and an average GDP per capita of US$643. EAC members are divided in terms of income and social indicators. Kenya has the largest economy, with annual GDP of US$32.1 billion (41 per cent of total GDP in EAC). Measured in GDP per capita, Burundi is the poorest member, with an average nominal per capita GDP of US$ http://ayurvedic-treatment.com/?p=1521 180 billion????.

The ultimate goal of the East African Community, beyond trade liberalisation and economic unity, is to pursue full political federation. This move is intended to be anchored on establishing regional structures and building institutional capacity through development of regional policies, promotion of good neighbourliness and cooperation in the areas of international relations and strategic interventions.

It is good thing to note that currently the six partner states believe in market driven policies, good governance and rule of law. These factors help to shape common political ground that will help in shaping economic, political and social integration and eventually the establishment of a political federation.

However, the fear of loss of sovereignty is an issue in the minds of some (if not all) members of the political elite of East Africa. The fear is that as a political federation, the nation state would cease to have any meaningful powers; that they would be relegated to mere provinces within the federation. This fear cannot be ignored and mechanism is needed to eliminate such fears. This is a political challenge for EAC and its citizens.

First, we can trace this to the colonial period. While Kenya and Uganda initially shared the same colonial masters-the British, the present day Tanzania; Rwanda; and Burundi for example were earlier colonised by Germany which later fell during the defeat of Germany in the 1st World War to Belgium in Rwanda and Burundi and British in Tanganyika.

This means that Kenya and Uganda have a longer colonial history and similarities dating back to the beginning of colonial period compared to the other three members.

The history for example have for a long time put Tanzania in an awkward position and at certain point it is alleged  that Tanzania has also been considering joining the regional southern African Development Community (SADC).

While Kenya and Uganda have been known capitalist countries from independence, Tanzania took a different route through her founding president Mwalimu Julius Kabarage Nyerere who practically embraced socialism as part of the ideology of Pan-Africanism. This ideology issue still exists with Tanzania having frequently been accused by member states of trying to sabotage EAC integration.

Secondly, basically the political environment in EAC is totally different. While Kenya and Tanzania have already embraced a little democracy, rule of law, multipartyism and the basic freedoms, countries like Uganda, Rwanda and Burundi are turning back on most of these gains with recent debates on the need not to limit presidential terms in the three countries, which could allow those countries to have their president for life. This is also partly because the political histories of the EAC countries are very different (such as early frequent coups in Uganda, and the subsequent civil war; the genocide in Rwanda and the near genocide in Burundi to mention but a few).Delete since its political, has no place in business.

One of the primary near-term aims of EAC is to successfully establish a customs union and common market. A single unified market with about 133 million consumers will be a catalyst for the economic growth of East Africa, allowing for record levels of trade and economic corporation. The overall goal for the common market, signed in 2010, is to allow for free movement of goods, people, capital, labour, services and right of establishment. Customs processes and fees have been streamlined and harmonised between member states, although the community is still working towards full implementation of both the customs union and common market.

Common market initiatives have largely been slowed by the indifference of member states to take the initiative and seek out reforms necessary to comply with EAC market goals. Apart from Rwanda for the most part, member states have been slow to implement the market reform protocol, mainly due to a lack of political will to make meeting national reform guidelines a priority.

Politicians have been slowed by fears among local constituents that reforms leading to a common market will create job losses, undermine local competitiveness, and lead to societal problems due to the potential migration of peoples within the EAC.

Another of the more visible and transformative policy aims of the member states of the EAC is to enter into a monetary union, with the East African shilling as the new currency. The success of the monetary union under negotiation will call for concerted interventions to harmonise the policy and regulatory frameworks benchmarked to best practice, undertake region-wide civic education, strengthen and empower the institutions that implement and monitor monetary and fiscal affairs at the regional and national levels.

The monetary union protocol was signed by community heads of states in Kampala, Uganda in November 2013, outlining a ten-year road map towards monetary union. Guidelines to further harmonise and cooperate the member states and the East African Central Bank are discussed.

With the agreement aiming at establishing a monetary union taking place as recently as 2013; the road to full implementation of a monetary union and common currency will be a long one, with delays likely to push the timeframe past the stated ten year mark.

Looking at the monetary union, the EAC members as discussed earlier are still unequal. While both economies are improving since its formation, Kenya still remains the biggest economy and the strength of the Kenyan shilling is still dominant within EAC.

This could explain why in the European Union, the British sterling pounds is still considered more powerful than the Euro and the main reason why it is still being used separately. Will Kenya accept one monetary union if one Kenyan shillings still equals to more than 30 Ugandan Shilling?

With a thorough understanding of  EAC and its plans for future integration, it is important to consider steps which may help aid the community reach its goals of becoming a formidable union.

Firsts and foremost, it is critical that the EAC does not rush steps to be a union simply for the sake of appearing to make progress. Integrative steps taken without care may do more harm than good in the long run, and could risk dividing the EAC if negative steps follow. It is vital to the success of integration plans that steps in the process are taken in succession, as the later steps cannot be viably accomplished without a solid base of initial reforms.

In a similar thought, the larger steps towards integration such as a monetary union and political federation should be viewed in a cautious light and only tentatively considered while earlier steps in integration continue to progress.

The case of the implementation of the euro currency in Europe should serve as some degree of warning to the EAC, demonstrating that nations with differing economic levels cannot be easily absorbed into a single monetary union without extreme care.

On the other hand, political federations should not be seriously considered until EAC member states have proven a willingness to cooperate fully and work as a single unit, which thus far has not been evident

How this dying data centre bounced back