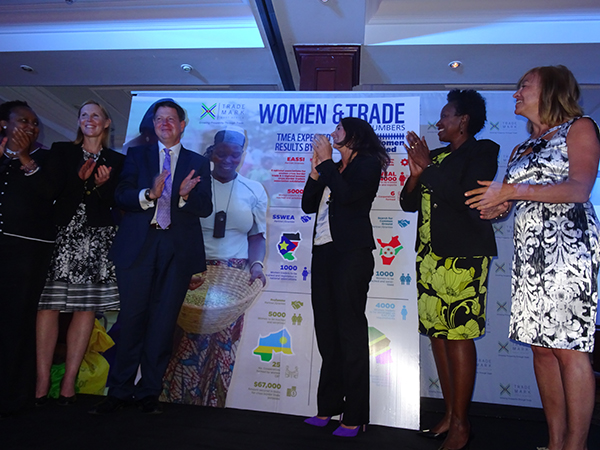 TMEA plans to scale up the Women and Trade programme to reach over 300,000 women across East Africa

More than 4,776 women in Uganda have benefited from a TradeMark East Africa (TMEA) Women and Trade programme since 2015. They are part of the 25,000 women across East Africa who have directly benefited from the programme. This was revealed during the Trade and Development Forum held in Kampala between February 28 and March 1st, 2018.

TMEA has also increased market access for traders through establishment of five cooperatives in subsector areas of beans, coffee, maize, handcrafts and beverages in the districts of Hoima, Kabale, Mpigi, Jinja, Masaka and Kapchorwa.

Clare Kabakyenga is one of the programme beneficiaries and trades between the borders of Uganda and Rwanda. She recently scaled up to trade in Kenya’s Busia border. She shared with the audience her journey, successes and lessons.

“I started trading to increase my income. My journey began in farming, first planting potatoes and then beans. Beans are viewed as women crops in my culture. Farmers in my district are mostly small scale and yet to penetrate markets competitively, you need volumes. So, we formed Manyakabi Area Cooperative enterprise which currently has 8105 farmers, 89 per cent of who are women. Members supply the cooperative with maize and beans to bulk. Markets in Uganda were saturated by the same products and so, we contacted middle men who sold to Rwanda and Democratic Republic of Congo. On learning the profit margins, they got, we decided to take a risk and export to Rwanda. Our first export spent 8 days at the border because we had to get a certificate of origin (CoO) and a Phsytosanitary certificate. The CoO was from the export promotion board and Phsytosanitary certificate from ministry of agriculture. Being new in export business, we had a tough time understanding the documents resulting to a lot of back and forth with border officials. The first trip was a loss. In 2015, we learned of TMEA and we joined the trainings they were supporting at the border. It is from these that we understood export processes and EAC requirements and got market information. You see, such things as the benchmarked moisture content for grains in East African neighboring countries sound simple but mean a loss or a profit for traders. Most new traders are unaware.

Other aspects of the training included support services, improved post-harvest handling technologies and how to access markets. Prior to this, we would sell all our grains irrespective of the quality, at the same price. After training, we priced our grains by quality and looked for quality conscience buyers. Before the programme and training I would make UGX 800, 000 ($224) per season from selling maize, now I make UGX70million ($19600) per season.

While leading a plenary discussion on women and trade, Uganda Minister of Trade, Industry and Cooperatives Hon. Amelia Kyambadde, commended Clare’s cooperative. She specifically highlighted TMEA’s ongoing women and trade campaign, #LetWomenTrade and the impact it will have in changing mindsets towards women traders while highlighting their challenges. She noted that TMEA’s efforts complement the ministry’s agenda of empowering women traders. The ministry is currently issuing machines to women’s groups for value addition. “The Ugandan trade ministry is also reviewing all trade policies to ensure they have gender provisions. Moving forward and as Government, through a collaborative effort, we aim to reduce challenges that women face as traders and call upon other organizations to join us,” said Kyambadde.

She further noted, “This programme demonstrates that public private partnerships can actually bear tangible results when fully utilized. As a government, we will continue supporting partners to strengthen women and trade programmes in the country.”

On his part, TradeMark East Africa, CEO, Frank Matsaert noted that, “In the next five years of our strategy, we will scale up our programme and reach to over 300,000 women across East Africa.”

Other trade topics that were discussed during the East Africa Trade Development Forum were – technology and trade, e-government for trade, new ways of funding trade, export led industrialization, rail, road and ports, among others.

Industry leaders to gather in Nairobi to discuss investing and developing in Efficient Properties in Africa.