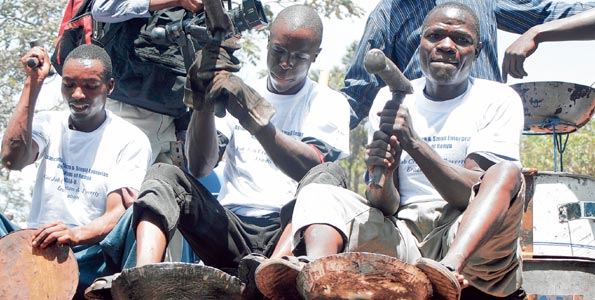 Themed “1 million sustainable jobs through SMEs”, the event brought together delegates to network with industry leaders, policy makers, investors, entrepreneurs and development partners in a bid to address the growth of SMEs.

“The government has undertaken and will continue to pursue the support of the MSMEs and the informal sector to improve the business and investment climate through trade facilitation,” the CS said.

The SME Fest 2017 held  conversations that will push the SME sector forward, with issues such as tax incentives for small businesses, promotion of export trade as well as growing Agro-processing and value addition opportunities for entrepreneurs.

This will see them engaging with government and private sector players to find ways of promoting export trade and value addition in Agro-processing, as the region’s trading blocs begin to solidify sustainable cross-sector partnerships.

Patricia Ithau, Country Director for Invest In Africa (IIA), a not-for-profit organization that creates, said there is need to create awareness of setting up infrastructure, professionalism and governance that will convert credit into productive results.

“People need to copy good ideas, understand what went wrong and what they can do to make things right.” This, she said, would prevent small business from collapsing.

On the other hand, Malaika Judd, the Chief Operating Officer at Sendy, a company that provides technology solutions for vehicles and motorcycles, said: “Technology has made business very easy in today’s world and has reduced the amount of capital one needs to start a business.”

The event comes at the wake of a damning survey that revealed that about 400,000 MSMEs never get to see their second birthday. The survey, released in 2016 by Kenya National Bureau of Statistics (KNBS) stated that some 2.2 million MSMEs died within the last five years, painting a grim picture on the sector, which is the lifeblood of a growing economy.