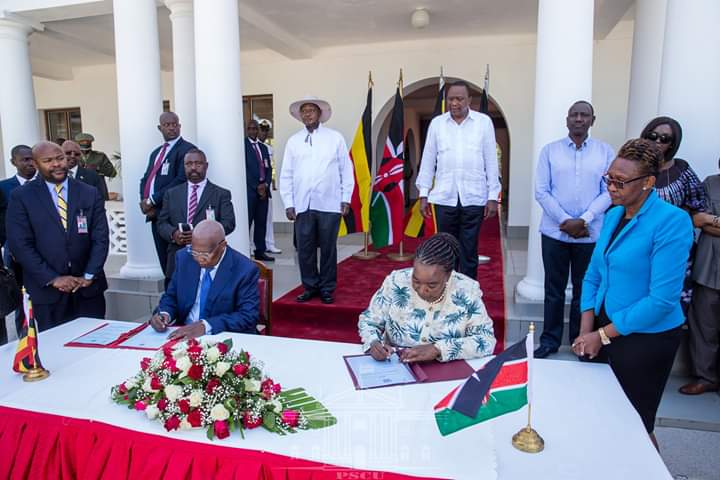 Trade analysts have expressed their opinion that there is the common perception amongst other East African countries that Kenya is too developed and hence should lean backwards and let other countries grow fast to catch up with it.

This manifested itself during Ugandan President Yoweri Museveni’s state visit to Kenya this week when East Africa’s longest serving head of state closed major deals for his country while Nairobi only managed to convince Kampala to allow Kenyan beef into the Ugandan market.

According to a press dispatch released by President Museveni’s press team, the Ugandan delegation managed to convince Nairobi to increase sugar exports to Kenya from 36,000 metric tons to 90,000 metric tons annually.

Struck during the bilateral negotiations is a deal to allow Uganda flood the Kenyan market with its poultry products amid concerns by Kenyan farmers that the government is driving them out of business by allowing cheap imports.

Furthermore, Ugandan tile makers will also be allowed to sell their products in the Kenyan market, something players in the Kenyan construction industry are likely to disagree with.

“I believe that the fruitful discussions that they’ve had (delegations) will be meaningful in terms of promoting trade, free movement of goods and services. The discussions will also help the movement of people between our two countries,” said President Kenyatta in a joint press conference with his Ugandan counterpart on Wednesday.

President Uhuru Kenyatta also offered Uganda land in Naivasha to set up a dry port for its cargo as the two countries pursue the Standard Gauge Railway (SGR) dream being pushed by China.

The only other thing that Kenya could claim to have left the negotiating table with is a verbal agreement by the two presidents who committed to hold further negotiations to end an impasse on the ownership of Migingo Island.

The deals struck between the two countries have not been well received by Kenyans with analysts questioning whether Kenya got the raw deal in Mombasa.

The financing framework of the SGR Phase II also featured heavily during the talks.

Uganda cannot secure financing from China without a commitment from Kenya to ensure that the rail reaches Malaba, a town in Busia County that borders Uganda.

Kampala is under pressure from Beijing to ensure that Kenya ensures that happens.

This also comes hot in the heels of disillusionment of Kenyan traders protesting harassment by Tanzanian authorities despite commitment by President Kenyatta and Tanzanian President John Magufuli’s call for peace.

According to trading economics data an independent trade statistics aggregator, the balance of trade between the two countries is tilted in Uganda’s favour but Uganda is still Kenya’s largest external market.

As quoted through a local daily, Bob Nzioka, a development consultant and chief executive of Lenana Analytics, a company based in Nairobi, Kenya could have leveraged the deals to trap Uganda into ditching the Tanzanian SGR route.

“Diplomatic negotiations are always advancing a country’s interests, right now, the SGR seems to be of more importance to the Jubilee Administration. On paper it might look that Kenya has got the raw deal but Nairobi could have a card up its sleeve and that is how diplomacy works,” Nzioka said.

Nzioka also added that the decision by the Kenyan government to host Museveni in Mombasa was also strategic to convince him that it is both countries interests to push through the deal.

Drought, cause of rise of inflation rate to 4.3pc