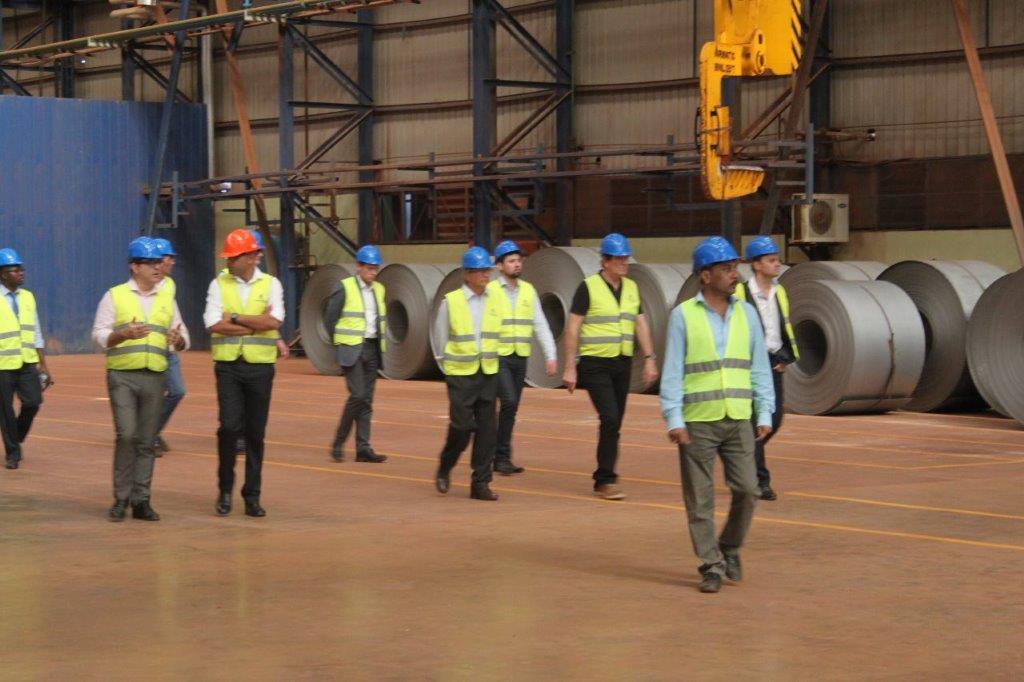 Roofings Group, the leading manufacturer of steel products in Uganda, late November, hosted delegation from the Energy Industry Council (EIC) Oil and Gas Trade Mission to Uganda. The tour was initiated by the British High Commission, and led by Lord Popat of Harrow who is UK Prime Minister’s Trade Envoy to Uganda.

He was accompanied by key delegates from DIT Oil and Gas (Phil Haymes), Hydro Plan UK’s Kieron Hanson, Rockwell Automation’s Trevor Wren and ABB Ltd’s Nigel Greatorex, among others, with the main intention to witness Roofings Rolling Mills showcase its leading steel products dedicated to the emerging opportunities in the Oil and Gas sector, as well as display her manufacturing muscle in such products.

“Roofings Group is honoured to host Lord Popat and the delegation of EIC at the Roofing Rolling Mills plat in Namanve (Industrial Park in Kampala, Uganda). This is an opportunity to internationally showcase our product portfolio across our product range, regional footprint capabilities, meet the need of differing financial demographics and expansion potential,” said Oliver Lalani, Executive Director, Roofings Group.

Lord Popat is a Conservative Peer, Party Whip and was appointed UK Prime Minister’s Trade Envoy to Uganda and Rwanda in January 2016. He was made a Peer by Prime Minister David Cameron in 2010 for his services to small businesses.

His interests in the House of Lords are SMEs, increasing Britain’s export and trade relations with India and Africa. He, coincidentally, traces his birthplace to Uganda. And his visit to Roofings Rolling Mills was a huge milestone to the company, since the official is looking forward to increasing trade and investment ties between the UK, Uganda and Rwanda, which are East Africa’s high potential markets.

The UK official regularly meets with business organizations and entrepreneurs from across the country and is determined to encourage the next generation of businesses in the UK to think globally.

“Our trained and capable human resource, state-of-the-art machinery, periodic market research coupled with our continuous need to grow beyond East Africa reaffirms our firm stand and purpose. To meet the international requirements of standards and consistency in supply for markets like Europe and the United States, we are ably proficient to meet their need,” Lalani said.

Playing host to such a delegation, Roofings Group, a $145million investment that manufacturers iron sheets, hollow sections, TMT bars, Roofings plastics polypipes and wire products, among other steel and plastic products, is poised for bigger opportunities in the East African and Central Africa’s construction sector.