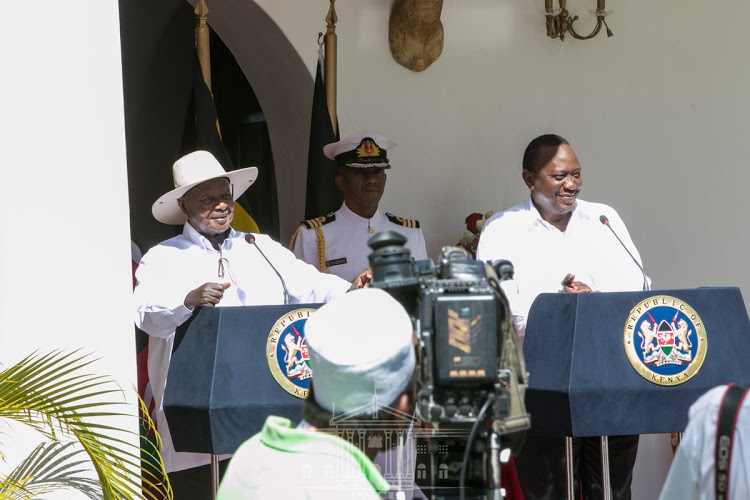 The two countries initially had deferred on who would finance the cross-border costs of SGR. But China Exim Bank have since insisted that Kampala has to get Kenya’s commitment to build the rail from Kisumu to Malaba, before Uganda secures funding for the line moving from Kampala to the common boundary.

Kenya however had appeared to be taking the line to Kisumu port as part of the plan to have goods evacuated through Lake Victoria by Uganda and Rwanda, portraying an unclear prospects for a seamless SGR line between Mombasa port and Kampala.

The two heads of state on Wednesday appeared to have a common understanding on the extension of the SGR to Kampala.

“The SGR train had evidently improved transport of cargo from Mombasa to Nairobi and I am now keen on the joint development of the SGR line to Kampala.” Mr. Kenyatta said, indicating that this will reduce the travel time of cargo and people from Mombasa to Kampala, to one day.

In his response, President Museveni of Uganda said the move to extend the SGR would turn out as a game changer.

“We have had great progress on these discussions. It will be a game changer especially for the movement of cargo from Mombasa to Kampala.” He said.

In 2017, a joint delegation from both Nairobi and Kampala to head to Beijing flopped and the recent meeting was considered an important one to discuss the extension.

The last phase of the SGR between Kisumu and Malaba has faced funding challenges in settling a financial deal between Kenya and Uganda, which would then unlock the funding for Uganda’s Malaba to Kampala line.

However, Kenya has been blamed by the Ugandan officials for failing to commit to financing the remaining phases of the SGR (Naivasha to Kisumu and Kisumu to Malaba) which instigated the idea of overhauling the old meter-gauge railway.

The Mombasa-Nairobi section was completed last year and prompted Kenya to secure another loan of sh150 billion from china to extend the railway line from Nairobi to Kisumu. Kenya is also upgrading the Kisumu harbor at sh14 billion to allow movement of goods through Lake Victoria to Uganda and Rwanda.