Obongi Residents Urged To Take Advantage Of Opportunities In The Region 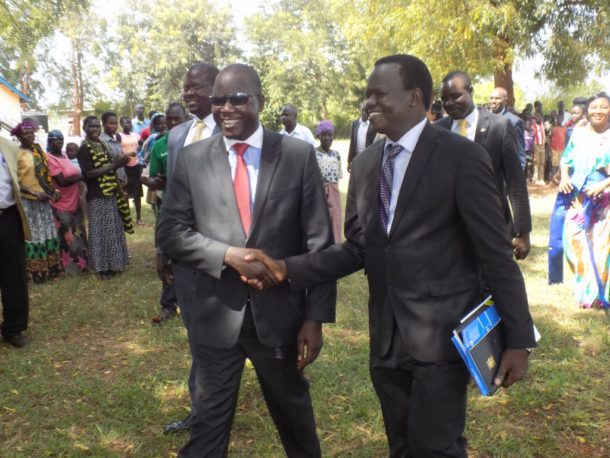 The residents of Obongi in Northern Uganda have been challenged to take advantage of the integration process and tap in to available opportunities in the region.

Speaking on Monday during the Obongi Day Festivities 2016, Rt Hon Daniel F. Kidega, the speaker of East African Legislative Assembly (EALA) said the evolution of the Common market agenda would be meaningful for as long as EAC citizens embraced the transformation agenda.

“The transformation agenda must start from oneself, we must change our individual mindsets initially, if we are to fully embrace and appreciate integration”, Kidega said

The Speaker called on the Obongi inhabitants to enhance productivity by trading in their commodities as a way of fully engaging in the free market.

He informed participants that the EAC was committed to enhancing inter-connectivity by improving infrastructure.

“The EAC road and rail network as well as enhancement in ICTs will play a key role in opening up the region”, Kidega said.

“It is important for authorities in Obongi to see how to open up the hinterland to the main region would benefit from the inter-connectivity of infrastructure”, he added.

The speaker hailed the Government for ensuring peace and stability in Northern Uganda and said it was a pre-requisite for development.

The Leader of Official Opposition in Parliament, Hon Winifred Kiiza, called for enhancement of infrastructure and said all regions, devoid of their affiliations, were deserving.  “All citizens of Uganda pay taxes and Government of the day must ensure the services are equally distributed”, Hon Kiiza said.

He remarked that NRM Government would ensure equal services are rendered to all citizens.  The Minister of State for East African Community Affairs, Hon Julius Wandera Maganda said the location of Moyo district and the West Nile generally was strategic and it would open up the entire region.  He pledged to ensure the Ministry for EAC Affairs undertakes sensitization in the area.

“Conflict is costly. We have all seen what is happening in the neighbouring countries of South Sudan, Burundi and the Democratic Republic of Congo. It is important for us to build strong institutions and adhere to the fully commiting to democracy”, he said.

A number of activities were held during that climaxed in the celebrations.  The activities included key workshops, sporting activities and cultural events.

A 12 year old teen who published his own book

FEP Holdings To Offload Its Stake in Credit Bank