Africa Is Still A Difficult Region For Paying Taxes-PWC 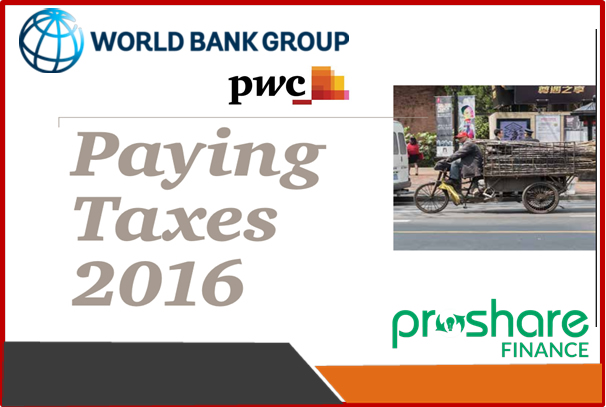 Economies around the world continue to make progress in simplifying and reducing the burden of tax compliance on business, according to the latest edition of Paying Taxes 2017, a report by the World Bank Group and PwC. The report, released on Thursday,  finds that the Total Tax rate decreased by 0.1 percentage points to 40.6 percent; time to comply declined by 8 hours to 251 hours; and the number of payments by 0.8 to 25 payments.

In an expanded analysis this year, the report finds that for some economies, post-filing processes for value-added tax (VAT) and corporate income tax (CIT) returns could be among the most challenging and lengthy processes for businesses to comply with. In some cases, the length of the processes can create cash flow and administrative delays for companies of more than a year.

The reduction in the global average for time to comply of 8 hours is higher than in recent years reflecting ongoing improvements in electronic tax systems, and in particular as a result of reforms implemented in Brazil. Similarly, the fall in the payments sub-indicator is largely due to the introduction and use of electronic filing and payment systems, which was the most common feature of tax reform in the past year. The small decrease in the Total Tax Rate results from 44 economies increasing taxes while 38 recorded a reduction. It also represents a combination of a decrease in other taxes offset by small increases in both profit and labour taxes.

Globally, the most common feature of tax reforms in the past year was the introduction or enhancement of electronic systems for filing and paying taxes. Twenty-six economies implemented such changes. Jamaica was the top reformer, reducing the number of payments by 26 to 11.

The new additional research included in the Paying Taxes 2017 study finds the interactions which a company has with tax authorities after a tax return has been filed can be some of the most challenging. The processes vary significantly from one jurisdiction to another.

Overall, this year South Africa’s Paying Taxes ranking declined from position 20 to 51. For the first time, this year’s study has been extended to look at the processes that take place after a tax return has been filed. The new post-filing index measures two processes that might take place after filing: claiming a VAT refund, and correcting an error on a corporate income tax (CIT) return including going through an audit when applicable. This is the primary reason why South Africa’s ranking has declined substantially, explains Kyle Mandy, Tax Policy Leader for PwC South Africa. In South Africa it takes 26 weeks for a company to obtain a VAT refund. “However, much of this poor performance in the context of a scenario such as the one in the case study is due to delays from the point of view of the taxpayer. In a scenario such as this were taxpayers to comply timeously it would significantly reduce the amount of time it takes to obtain a refund. Unfortunately, it is a South African habit, for varying reasons, to take all the time available to respond to information requests from the tax authorities,” adds Mandy.

In South Africa it takes 25.1 weeks for the tax authorities to complete a CIT audit. The country performs relatively well in this regard and is below the world and Africa averages.

The report finds that 162 economies have a VAT system, with a VAT refund available to the case study company in 93 economies. A fast and efficient process can be critical to ensure that a company does not face cash flow difficulties. For economies with a VAT refund system, on average it takes just over 14 hours to make the VAT refund claim, but it then has to wait over 5 months (almost 22 weeks) to receive the refund.

On further analysis of the difference between low and high income countries, the study finds that in low income economies it can take more than twice as long to comply with procedures to correct CIT errors, and that low income countries are twice as likely to conduct an audit.

Mandy adds: “Until now there has been little information available regarding post-filing compliance burdens. The new post-filing index shows that there are significant variations around the world in how tax authorities approach VAT refunds and corporate income tax audits. It is hoped that the study will allow tax authorities to better understand the effect of these procedures on taxpayers and in the process assist in reforming legislation and practice to enable it to make it easier for companies to do business.”

In the Africa region, it takes the case study company 18.5 hours on average to correct the error in the corporate income tax return and comply with any resulting audit. In South Africa, on average it takes a business 14 hours to correct an error in a CIT return. At 2 hours, the most efficient processes are in Seychelles and Tunisia where an audit is unlikely to be triggered and the least efficient is the Central Africa Republic where an audit is likely to take place, the time to comply with the process is 66 hours.

Africa is still a difficult region for paying taxes. It has the highest average number of payments (36.7), and the second highest Total Tax Rate (47.1 per cent) and time to comply (307 hours). The Total Tax Rate continued to increase (due to implementing minimum tax rates and increasing social security contributions).  The Total Tax Rates in 28 out of the 53 economies in the region are above the world average.

“South Africa’s Total Tax rate of 28.8 per cent compares favourably with global and regional economies,” says Mandy. “However, it ranks behind some of its regional neighbours such as Botswana (25.1 per cent), Mauritius (21.8 per cent), Namibia (20.7 per cent) and Zambia (18.6per cent).

South Africa has a relatively high rate of profit taxes of 21.7 per cent which is well above the global and Africa averages of 16.3 per cent and 18.2 per cent respectively. There is the added risk that the total tax rate will increase in future as pressure mounts to introduce new taxes on business to fund increasing spending pressures such as social security reform, NHI and education.

The average time to comply in the African region is 307 hours, a reduction of 7 hours compared to 2014. This can be attributed to the increased use and improvement of electronic systems as well as other administrative changes such as upgrading the accounting software, simplifying returns and introducing unique returns in the region. The average for the region remains well above the world average of 251 hours and is exceeded only by South America with 564 hours.

South Africa performs reasonably well (ranked 90) on time to comply, below global and Africa averages. SARS filing and payment systems are generally regarded as user friendly and not overly time consuming. The primary area where improvement could be made is on corporate income tax where South Africa’s time to comply is above the world and Africa averages as a result of significant preparation time required before filing a return, comments Mandy.

“Taxes are important to the proper functioning of an economy. There is still much room for reform in a number of economies around the world. It is hoped that the introduction of the post-filing index will provide tax authorities and policy makers with a benchmark to assess and measure their processes against other economies and incentivise further reform aimed at reducing the compliance burden,” concludes Mandy.

US-based IT firm, Cognizant Technology Solutions, Under Probe For Bribery