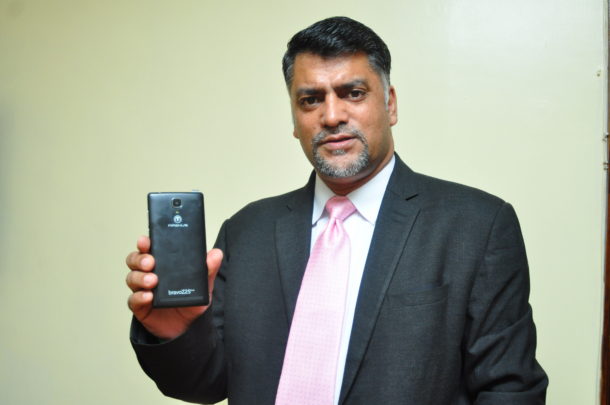 According to a study by e-commerce company, Jumia, of the 3.1 million devices sold in Kenya in 2015, 1.8 million were smartphones, representing 58 per cent of the units sold.

The report further indicates that high penetration and growth rate of smartphones is primarily due to a strong economic climate and increasing internet and mobile connectivity. This has created a favourable competitive landscape, which has led to proliferation of more brands in to the local market.

One such brand, which has just made a debut in Kenya and is out to battle for a share of the smartphone market with the already well established brands like Samsung, Huawai, Tecno, and Infinix is Magnus Telecom.

“After consolidating our position in Saudi Arabia and United Arab Emirates (UAE), we wanted to create our own brand outside these markets. Kenya is a very advanced market composed of urban and rural mature customers. It’s cool weather condition also makes it the ideal place to be in east Africa,” says Mr.Noor Ali Noor, Director (Africa) , Magnus Telecom.

Magnus Telecom is part of Telelink Group Limited based in Dubai, UAE.Telelink has been in telecommunications business for the last 15 years while Magnus mobile is about three years old in the UAE market.

According to Mr Noor, unlike other brands, Magnus Telecom is proud to be among the smartphone brands to redefine the market for users in Kenya.

The company, Mr Noor says, is perfectly positioned to wrestle it out with the other big brands in the next wave of smartphone devices with price tags that are unbelievably affordable.

We will address the market through our Kenya Partner UMOJAPAY Smart Shop Limited Headed by Ms Riffat Manji. The service arrangement for Kenya customers is with Finecare, headed by Mr Toni.

“Whoever said high-end handsets have to be expensive missed the point. Our idea is to sell at a lower price and generate volumes rather than selling a few handsets at exorbitant prices,” Mr Noor.

“We are not here to make money at the initial stages, but rather to give people value for money. Once they realise this, we will grow and then we start making money. It’s a game of numbers aimed at acquiring 5 percent of the market share by March 2017.”

The phones are currently being sold mainly through Jumia Kenya. However, they also intend to partner with leading telecommunication service providers such as Safaricom and Airtel to help market their brand in the Kenyan market.

Additionally, they are looking forward to sell their products in other e-commerce sites such as OLX Kenya.

“Our wide range of phones features long lasting batteries, impressive in build memory that can expand to hold all of users’ precious memories. Add magic touch screens, dual SIM capabilities, and anti-radiation technology, and you’ve got a selection of future proof handsets that are set to excite even the most discerning buyer.”

Devices in the infinity line make up the company’s flagship range and the Infinity G10 is right at the top of this pile.

One of the most compelling features in this phone is the fact that it comes with 16 GB of storage space. This is enough to install plenty of apps and store many files. If you choose to install a micro SD card, you will be glad to know that you can upgrade by a maximum capacity of 64 GB. Since there is enough storage, one can carry movies to watch while on the move.

Its graphic processor also enables one to turn the 5.5 inch display into a gaming screen and bring enjoyment into one’s leisure.

One of the key issues that Mr Noor is lobbying for in the sector is a level playing field.

“If you are a player within this sector, and also abide by Government policies and contribution to society that will be much better progress and growth as an Organisation and Brand. We are ready to cooperate with CAK for any initiative they attempt.

Mr Noor believes that in the next five years, Magnus Telecom will be a well-known brand not only in Kenya but across east Africa.

“We will be among the top three brands in east Africa not only in terms of volume but also in terms of value for money, good after sales services, and regular introduction of new models,” he says.