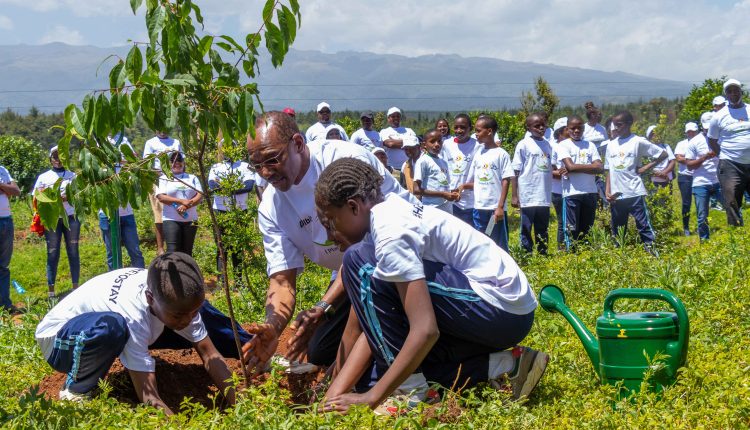 The tree planting exercise is being done in partnership with the local communities and employees as part of a tree-planting initiative that will contribute toward the Conservancy’s target of planting 5,000 indigenous tree species in 2022.

This further complements the existing work done by the local communities and will ultimately contribute to the already existing 35,000 indigenous tree species previously planted in the Mount Kenya Forest.

In Kenya, Dalbit has played a leading role in supporting the government’s efforts to combat climate change through forest and landscape restoration. The government of Kenya currently has an objective to increase the country’s tree cover from 6.2% to 10% by 2030.

Other than restoring the environment, tree planting is aimed at providing a green and suitable environment for mountain bongos in the sanctuary, in support of the rewilding and breeding programme. The programme aims to improve the population of the endangered species in Kenya, from the current population of less than 100 in the wild.

Timothy Skudi, CEO at Dalbit said that they are delighted to mark 20 years of fuelling regional growth across East, Central and Southern Africa.

“We have been instrumental in providing total energy solutions that have supported African businesses to drive economic growth and higher living standards. Whilst fuelling growth, we have also sought to create a lasting impact for the communities we serve,”

He noted that giving back is an essential part of the way Dalbit operates each day, and through charitable giving and education, they have helped to address some of the greatest social challenges facing the region – including energy access, health, the environment and biodiversity.

“This tree planting is part of this impact, and we are thankful to the local community and stakeholders who have come to contribute to this sustainable action for our country.” Timothy Skudi, CEO at Dalbit

Dalbit has been a lead benefactor of the Mount Kenya Wildlife Conservancy initiative since 2013, which works to conserve critically endangered wildlife species in Nanyuki.

The company’s funding and support for the scheme has recently culminated in the release of five mountain bongos, one of Kenya’s most iconic species, at the Mawingu Mountain Bongo Sanctuary in March 2022. These critically endangered animals are endemic to Kenya’s Mountain Forests.

The company has continued to supply fuel via road networks from depots for 20 years, ensuring energy access for customers in Kenya and across the Region. They have played a defining role in building up the energy infrastructure of frontier markets.

Looking to the future, Dalbit will continue to invest in order to fuel progress across the region, whilst giving back to the communities. Mr Skudi stated a belief that traditional fuel storage and distribution will remain a vital part of any country’s energy network and looks forward to contributing to the national development of even more countries over the next 20 years.

Innovation and pushing boundaries are central pillars of the green energy transformation of the continent. As Natural Gas continues its emergence as a leading ‘bridge fuel,’ Dalbit is investing its business to adapt for this next step, ultimately helping countries move towards a low-carbon development path.