DRC set to sign the treaty of accession to the EAC

President Uhuru Kenyatta is today expected to host the ceremony to admit the Democratic Republic of Congo to the East Africa Community.

This is after he received his regional counterparts Felix Tshisekedi (DR Congo) Yoweri Museveni (Ugandan)and Paul Kagame (Rwanda) at State House, Nairobi for the ceremony. 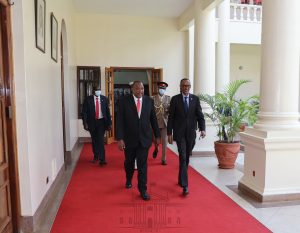 Museveni who was accompanied by Ugandan officials was received at Jomo Kenyatta International Airport by  Foreign Affairs CS Raychelle Omamo.

Tshisekedi arrived in the country on Thursday evening for the ceremony accompanied by the First Lady of DRC Denise Nyakéru Tshisekedi on a two-day official visit to the country.

President Kenyatta is hosting the meeting, where the regional multilateral body’s new map will also be unveiled, in his capacity as the Chair of the East African Community (EAC) Summit of Heads of State.

Sh 3.3 Trillion Budget leaves much to be desired