“Transforming lives through Industrialization and Job Creation for shared prosperity.” 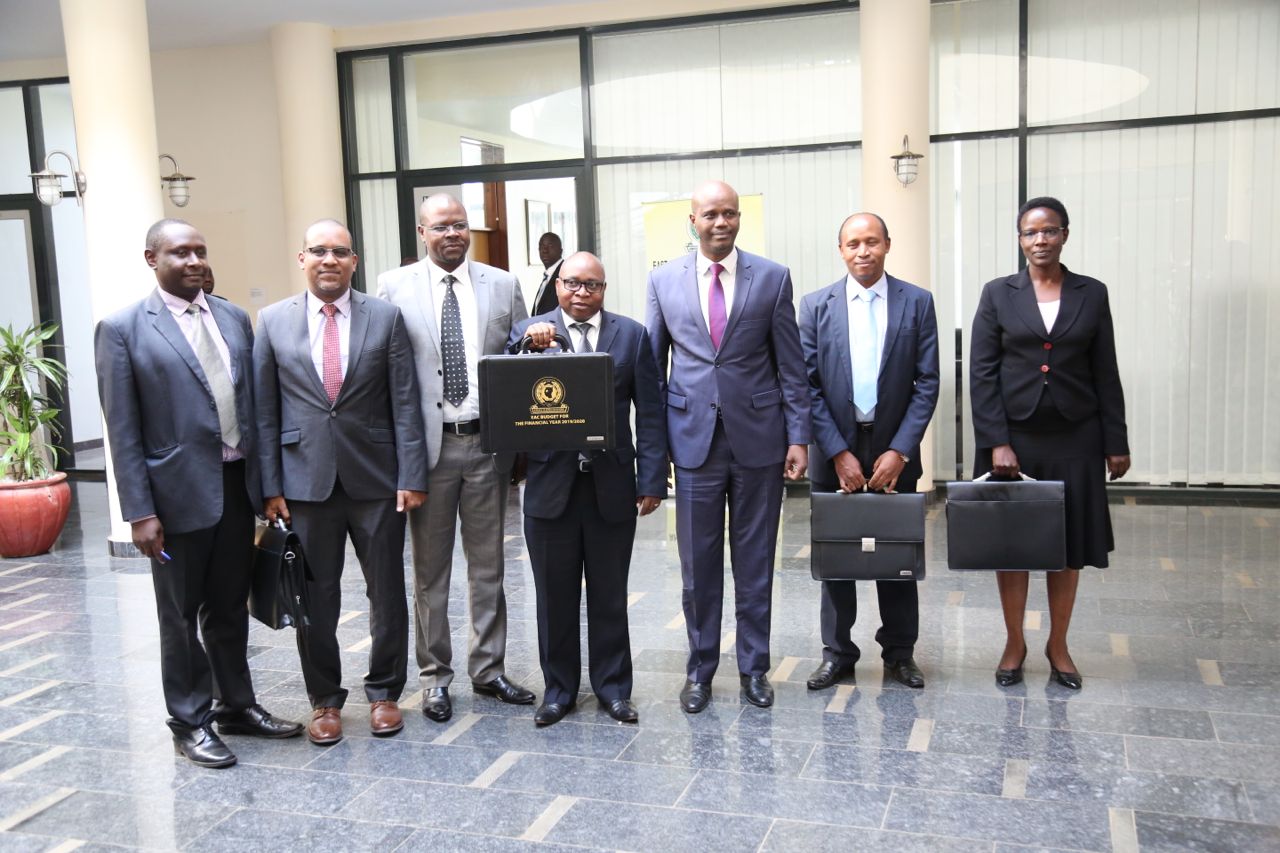 Barely a week after Partner States presented their respective budgets, the EAC on Wednesday afternoon presented for consideration, budget estimates for the Financial Year 2019/2020, totaling $111,450,529 to the East African Legislative Assembly.

The 2019/2020 Budget  themed: “Transforming lives through Industrialization and Job Creation for shared prosperity.  According to the Chair of Council of Ministers, the priority interventions for FY 2019/2020, will focus on the consolidation of the Single Customs Territory and promotion of intra and extra EAC trade and export competitiveness, development of regional infrastructure, effective implementation of the Common Market Protocol and the enhancement of regional industrial development.  Other areas include the implementation of the roadmap towards the EAC Monetary union, institutional transformation focusing on implementation of the institutional review recommendations and improvement of performance management at the EAC Organs and institutions.

Other key areas the Minister said, include promotion of peace, security and good governance and the constitution making process for the EAC Political Confederation, factors that will be necessary for successful implementation of socio-economic programmes to further support the growth and development of the EAC region.

The EAC is further expected to streamline and further consolidate on its operational systems to achieve the desired level of efficiency, accountability and value for money. The Chair of Council of Ministers cited a number of assumptions on which this year’s budget is pegged on to include the continued and consolidated political support of the EAC integration and the availability of adequate financial resources and remittances.     Political stability and good governance as well as safe and stable security across the region are other areas of consideration.

Last Financial Year, the August House approved a Budget of USD111, 933,303. The said amount was earmarked for among others; consolidation of the Single Customs Territory (SCT) to cover all imports and intra-EAC traded goods; Infrastructural development in the region and liberalization of free movement of skilled labour across the Partner States.

The Minister cited performance of the EAC Organs and institutions in the above areas noting general improvements, enhanced partnerships and drive/enthusiasm to address existing and new challenges

“Similarly, we are engaged in various studies, which should eventually culminate into pieces of legislation. At an opportune time therefore, this august House will have the opportunity to consider them or get the Council’s response on some of the proposals coming through as private Members Bills”, Hon Dr Ndumbaro informed the House.

On Infrastructure, the Minister informed the House of the completion of both the dual construction of the Sakina – Tengeru section, 14 km long, and construction of the 42-km long Arusha by-pass.  He informed the House of the completion of detailed design studies linking the 400-km long Malindi-Lunga Lunga and Tanga-Bagamoyo road between Kenya and the United Republic of Tanzania and that discussions between the African Development Bank and the two Governments were in place and at advanced stage.  Also completed are the feasibility studies and designs linking the Republics of Rwanda and Burundi to the Central Corridor.

On Civil aviation and airport matters, the House was informed the EAC Secretariat had during the year under review, coordinated the implementation of the EAC seamless upper airspace project including the harmonization of regulations, manuals of air navigation services operations and development of common secondary surveillance radar (SSR) codes. A memorandum of understanding for establishment, operationalization and management of EAC upper airspace has further been developed to facilitate the acquisition of interoperable air navigation infrastructure and services.

On agriculture and food security, the EAC Minister said the region remained committed to fully support implementation of the June 2014, African Heads of State Malabo Declaration on Agriculture Growth and Transformation in Africa. “The Community continues to prioritize implementation of the Malabo Declaration made by Heads of States in June 2014 on Agricultural Growth and Transformation in Africa and being implemented under the Comprehensive Africa Agriculture Development Programme (CAADP) Compact framework”, the Minister remarked.

On health matters, Hon Dr Ndumbaro said the Secretariat continued to implement major disease prevention and control initiatives in the region with financial and technical support from the Federal Republic of Germany through the German Development Bank (KfW) and GIZ. The Secretariat, he said, was in process of acquiring nine mobile laboratory units and 18 vehicles to bolster Partner States capacity to detect and respond to the most dangerous disease-causing agents such as Ebola.  Under the same project, 12 laboratories experts’ trainers of trainees (TOTs) two from each Partner State, were trained on the use of specialized laboratory techniques and use of advanced laboratory equipment.

Hon Dr Ndumbaro remarked the EAC on June 11-14th, 2019 undertook one of the biggest and most complex health sector led field simulation exercises in Africa at the Namanga border point. The Field simulation exercise enhanced Partner States’ capacity in pandemic preparedness and response. In addition, the Council of Ministers approved the EAC State of Women’s, Children’s and Adolescent Health and HIV&AIDS Report 2018, the 2018 EAC Reproductive, Maternal, Newborn, Child and Adolescent Health (RMNCAH) and HIV&AIDS Scorecard, as well as the EAC Regional Policy of Prevention Management and Control of Alcohol Drugs and other Substance use, 2019.

On environment and natural resources, the August House was informed of the development of an action plan on the implementation of Disaster Risk Reduction (DRR), and a corresponding training manual that inter alia; maps out disasters evacuation centers in Partner States; and strengthens/ harmonizes existing regional early warning systems. At the same time, the budget speech noted the progress made with respect to the framework for conservation and management of trans boundary ecosystem(s) in the region.