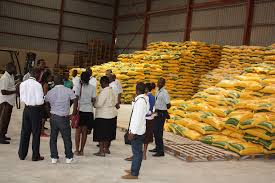 How East Africa’s largest rice miller was born in Uganda

To make it in life, one must be ready to take on challenges or remain where you are. Nobody knows the meaning of these words better than Mohammed B. Ahmed, Managing Director, Fol Logistics Uganda Limited.

He says in 2006, he quit his job at Emadel Uganda Limited to establish his own company.

“I had to quit because I was the main decision maker yet I was an employee in the company,” he says.

In 2013, and armed with US$20,000 from his savings, he ventured into the rice importation business.

When he realised that the demand was exceeding supply, he decided to venture into rice milling.

The company’s rice milling plant in Uganda is the biggest in East African and the second largest in Africa with a capacity of 300 metric tonnes per day. It employs more than 200 workers directly and thousands more indirectly.

He says that when they were starting, like any other business out there, things were not easy. For instance, as the pioneer investors at Kampala Industrial and Business Park, they had to cope up with the pathetic state of infrastructure at the park.

Ahmed he says that when they started milling, they realised that the taxman was levying paddy rice at the same rate as fully milled rice. This was unfortunate bearing in mind that rice that the he was using at the plant was not fully milled but had to undergo some processes.

Despite these challenges, the company has left an indelible mark  in the last two years. For instance, from an import trading company with about five workers, today it employs about 230 people.

The company’s projected annual turnover as at December 2016 will be to the tune of U$ 48 million. It commands about 70 per cent of market share, a figure that Ahmed intends to grow to more than 80 per cent in the next two years through rice farming and more distribution channels.

Their flagship brand, Kingdom Rice, has become a household name in Uganda and the firm is in the process of engaging with the Exports Promotions Board to start exporting to other markets in East Africa such as Rwanda, Tanzania, Kenya, Congo, and Burundi. A kilogram of Kingdom Rice retails at Ugs3,000.

“I attribute this success to a team of dedicated staff members. Above all, as a company, production of quality rice will remain at the centre stage in all our operations,” says the MD.

Ahmed says for the sector to realise growth, there is need for many farmers, especially from formal institutions, to access credit instead of borrowing from village saving schemes.

Secondly, he says more farmers need to access improved rice varieties seeds. “Many farmers are not even aware that there is such a thing as ‘rice seed’ as there are very few seed producers  who usually sell to companies, and not farmers within their communities. This means farmers recycle their seeds indefinitely and this undermines the quality of their crop,” he says.

Finally, he says farmers need to acquire drying facilities as the rice often gets mixed with dirt, especially stones.

The company has so far acquired two acres of land next to its milling plant at Kampala Industrial and Business Park where it intends to establish a  rice farm.

“It will be among the best rice farms in this region with modern equipment,” he concludes.

Entrepreneur Who Brought Amusement Park To The City

EAC to champion trade markets for women in agriculture