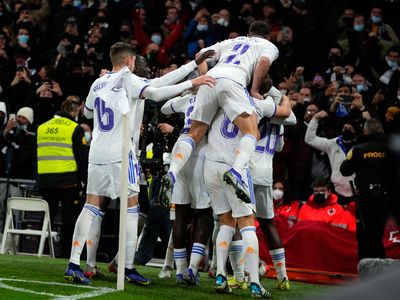 The first El Clasico of the calendar year in a Supercopa semifinal saw Real Madrid emerge 3-2 winners in extra time against their prominent rivals Barcelona.

Real Madrid took the lead in the first half through Vinicius Jr, through his powerful drive that flew past Marc-Andre ter Stegen in the 25th minute.

Barely some few minutes before halftime, Barcelona equalized through a lucky Luuk de Jong deflection from Eder Militao’s clearance from a cross rebounded off into the net.

Karim Benzema put Real in front on the 72 minute, after having hit the post few minutes after the beginning if the second half.

Real found the breakthrough in extra time with a decisive goal by substitute Federico Valverde who finished a deadly breakaway and put Madrid up to stay on the 98th minute.

Real Madrid under manager Carlo Ancelotti continues to march on in a dominant season so far. It has a five-point lead in La Liga ahead of second place Sevilla and 17 points ahead of Barcelona. They are also in the UEFA Champions League Round of 16 and the Copa del Rey Round of 16.